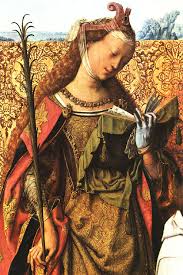 ‘Tis incumbent upon us in these days, so inimical to anything chaste and pure, to remind ourselves of the genius of the feminine and the glory of woman, signified in saints like Agnes, a young Virgin Martyr, who perished by the sword under the reign of Diocletian in 304.  Her name, which sounds like the Latin noun for ‘lamb’ (agnus) is in fact derived from the Greek, agnes, ‘chaste, pure, sacred’.

Agnes was a beautiful noblewoman, who, at the tender age of twelve, refused to marry the governor’s son, Procop, declaring:

I am already promised to the Lord of the Universe. He is more splendid than the sun and the stars, and He has said He will never leave me!

Hell hath no fury like a pagan scorned, so he condemned the young girl to death. Dragged through the streets to a brothel, her hair grew to cover her body, and the men who tried to have their way with her were struck blind. They tried to burn her alive, but the wood would not light. Eventually, she was taken out and beheaded. Contemporary accounts, preserved by Saint Ambrose, attest that the executioner was more afraid to kill her than she was to die:

A virgin and martyr, a double crown, highly venerated from the outset, attested to by the fact that she has her own antiphons in the Office. As her responsorium goes on to sing:

It is only by facing death square on that we too will find life. Running from death, we find only death. He who loses his life, he shall find it.

We Catholics must now be prepared for a new kind of martyrdom, for our beliefs are no longer welcome in the broader culture. Most people – not least the young, and the fairer sex amongst them – have never even heard of Saint Agnes, much less would be inclined to follow her example in dying at the very dawn of their lives for the truth, for the Auctorem vitae, the Author of life, and finding true life in the eternal bliss of heaven.

But we may hope. As Chesterton put it, the man knocking on that brothel door – which, I remind my students, is not a place where they make soup – is in some way searching for God. In their misguided search for ‘justice’ in the inverted world of transgenderism and deviant sexuality, perhaps they will stumble on the truth, even if it be when the wreckage of their failed falsities, lie in rubble around them.

The blood of martyrs is the seed, wrote Tertullian in the third century – the ‘seed’ for new life to bloom, when all the truth will all be revealed, and we may hope sooner than later.

In the meantime, keep up the good fight of the Faith, and stay strong in the grace of God. For only so will we be set free.