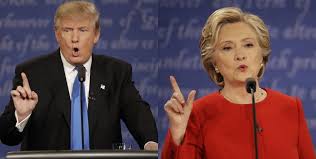 I watched a bit of the ‘debate’ last night between Donald Trump and Hillary Clinton, and I use that term reservedly.  A debate is meant to be a measured and regulated argument, based on reasoned principles, and not a bandying back and forth of scoring ‘points’, of braggadaccio, looking for weaknesses and straw men in the opponent, of self-congratulation, sound bites, smirks, finger pointing, figurative and otherwise, and, what was most annoying, skirting and ignoring the questions of the moderator (whether they were to one’s taste or not),  to say nothing of droning on over the time limit, yelling over not just the moderator, but each other.  It was bombast, spectacle, and playing upon the emotions and the a priori, unreasoned biases of one side or the other.  My  mind began to melt, so off it went (the debate, not my mind, I hope).

Have we as a society become so unhinged?  Is this what reasoned discourse looks like in our era?  Read accounts of the the sober and clear debates of yesteryear, say, between Abraham Lincoln and Stephen Douglas, where issues were discussed at length, with all the requisite and necessary nuances.

As per my recent post, is the age of the Internet, of ‘smart’ phones and texting, of hashtags and YouTube, reducing us to intellectual barbarism?  Ideas have consequences, certainly, but even worse is the lack of ideas, the incapacity or outright refusal to think clearly, to get to the roots of our modern malaise.

Saint Thomas Aquinas declared that the hallmark of a developed intellect is the capacity to make the proper distinctions, which allow us to see things as they really are.  Adequatio rei et intellectus, is how Thomas defined truth, following Aristotle, a ‘conformity between the intellect and reality’.

How I wished, in the few minutes I did watch Trump and Clinton, they would make such distinctions: in the U.S. relations with Russia, in the quagmire of the Middle East, the spiralling debt-load of the United States, and why they cannot continue to carry their current ‘obligations’, at home and overseas.   These were real questions requiring real, and fully reasoned, answers.  But none were forthcoming, just chest beating and talking points.  Trump with his ‘winning disposition’ and Hillary with her sense of smug entitlement, make rather pathetic figures.

Where, oh where, were the more fundamental  questions, on life and family, and the disintegration of both in American life, without which no other ‘questions’ can be solved?  Our modern media does not want to touch these with a hundred foot microphone. Yet as the recently canonized Saint Mother Theresa of Calcutta taught a few decades ago in her own soft, yet commanding, voice (I would not mind seeing her debate Clinton):

But I feel that the greatest destroyer of peace today is abortion, because it is a war against the child – a direct killing of the innocent child – murder by the mother herself. And if we accept that a mother can kill even her own child, how can we tell other people not to kill one another?…Any country that accepts abortion is not teaching the people to love, but to use any violence to get what they want. That is why the greatest destroyer of love and peace is abortion. ”

In all likelihood, Trump is the lesser of these two deeply flawed candidates.  But until America, and its President, (as well as Canada, and our own cherub-faced Prime Minister) face that bloated elephant in the room, we will never have peace, at home or abroad, and the world will continue to dis-integrate, regardless of who leads whom.