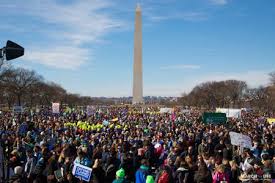 President Trump has declared today, January 22nd, the memorial of Saint Vincent the Martyr, as ‘National Sanctity of Human Life Day’ – something called for in Pope Saint John Paul II’s encyclical Evangelium Vitae that, as far as I know, no bishop has implemented in this country (but please do correct me if I’m misinformed). Ironically, on that note, Trump, who is not a Catholic, but does profess some sort of Christianity, speaks more forcefully on abortion than too many of the hierarchy. In his address, the President declared  – and my thanks to LifeSite for reporting on this – that every person — the born and unborn, the poor, the downcast, the disabled, the infirm, and the elderly — has inherent value” and said that the U.S. “proudly and strongly reaffirms our commitment to protect the precious gift of life at every stage, from conception to natural death.

He declared his intention to found an international coalition to dispel the concept of abortion as a fundamental human right”, and that his administration oppose any projects that attempt to assert a global right to taxpayer‑funded abortion on demand, up to the moment of delivery.

Finally, he promised we will never tire of defending innocent life — at home or abroad

The contrast could not be more complete from our own self-professed Catholic Prime Minister, whose dedication to abortion is unyielding and complete, the ironic inverse of President Trump. Yet nary a word is said on this from our Canadian episcopacy, Trudeau continuing with his self-satisfied smirk – sic pater, sic filius – that needs, even for the benefit of his own salvation, to be wiped clean from his face, so that his mind and soul may be healed and brought back to the right and true path. A day of reckoning will soon be upon all of us, and what we have done to the least of our brethren will come back upon our heads – for eternal good or ill.

In other good news, the Irene Thomas hospice in Vancouver, mentioned in Paula Adamick’s article, has refused to comply with the government directive to institute euthanasia – MaiD – and kill its residents. They will forego the $750,000 in subsidies. We will see if this will save them, for now, or if the pro-death apparatchiks will brook no opposition. Once one gets a taste for the infernal – the whole culture of death – it’s hard to go back.  But repent – metanoia, turning around our minds and souls – we, Trudeau amongst us, must, while there is still time to be had.

A final thought: It seems as though we are up against insuperable odds, but the story this morning from Mass of David slaying Goliath with stone and sling, so familiar, yet so real: The battle really is the Lord’s, for each, unique human soul, and in that we may trust.