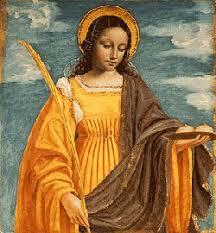 Saint Agatha (+251) is one of most venerated of the ‘virgin martyrs’, one of the seven women whose name appears in the Canon of the Mass (that is, the first and longest one, also called the Roman Canon, alas, not often heard in most parishes outside the usus antiquior, as most priests opt for the ‘efficiency’ of Eucharistic Prayers II or, perhaps, III).

Having made a vow of virginity, Agatha, under the reign of Emperoro Decius, was condemned as a Christian by a certain pagan suitor, Quintianus, whom she rebuffed – hell hath no fury like a Roman scorned. The young woman prayed to God for courage in what she was to endure:

Jesus Christ, Lord of all, you see my heart, you know my desires. Possess all that I am. I am your sheep: make me worthy to overcome the devil

We all might have to make a similar prayer soon, given the tide of things. Agatha was indeed ‘made worthy’, with the superhuman courage and endurance: tortured to death, racked, scourged, burned, her breasts cut off, after what her legend claims to be a miraculously unsuccessful attempt to have her consigned to a brothel. The whole mastectomy aspect of her suffering led to her being portrayed in paintings holding her severed breasts, which looked like loaves of bread; hence, Saint Agatha’s bread is – or was – a Sicilian and Italian custom. More seriously, she is the patron saint of those who suffer from breast ailments, not least cancer, and we should ask her intercession for so many women, older and young, who live with this ailment.

Emperor Decius’ persecution raged intermittently in the mid-third century, producing many martyrs, but Agatha’s life is one of the most historical and authentic of the early saints, testifying to the truth of the barbarity of paganism, a barbarism to which, as Pope Saint John Paul II alludes in the opening pages of his Evangelium Vitae, we are so ominously returning. Her name in Greek means ‘good’, the same word that Christ uses when He declares to Martha that Mary has chosen the ‘better’ (agathen) part. We could use a bit more of such true goodness in this world too often apparently blind and even immune to it.