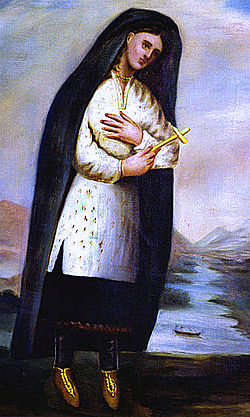 This was the title given to Saint Kateri Tekakwitha, by Pope Benedict XVI, when he canonized her on October 28th, 2012, along with six others, in Saint Peter’ Square (she had been beatified by Pope John Paul II back in 1980). With Saint Joseph as our protector, along with the Canadian martyrs, we seem to be well covered here in Canada, whatever our current distress. Fear not, says Christ in today’s Gospel, walking on the sea towards His apostles, I am, invoking the divine name given first to Moses.

(In one of those many quirks of providence (from our perspective), this is also the day that Pierre Trudeau signed, with Queen Elizabeth II, our current ‘constitution’, the Charter of Rights of Freedoms. We will have more to say on that in a subsequent post, as yet-another-endless-lunatic lockdowns is imposed on our fair land).

‘Protectress of Canada’ is quite the title for such a young woman, hidden from the world, dying on this day in 1680, in the backwoods, in the youngest days of this nation when it was a French-English colony, a vast, endless land of forest, field, tundra, lakes and rivers, a few villages dotted here and there. But what seems insignificant in earthly eyes, is great in the sight of God.

Tekakwitha (not her last name, but her pre-Christian given name) was born in 1656 in what is now the United States, near Auriesville, New York (but back then was part of New France, where a shrine to three of the Jesuit martyrs now stands). She was the daughter of a Mohawk chief and a captured Algonquin woman (who had converted to Christianity). In 1661, a smallpox epidemic swept through the village, carrying off Tekakwitha’s parents, and leaving the young girl horribly scarred, and sensitive to light. She would wear a blanket around her head, and avoided crowds, although was also kind, patient and diligent, learning all the skills of her indigenous culture. As she entered her later teen years, she refused offers of marriage, knowing somehow that she was supposed to remain a virgin and consecrated, even though she was not yet Catholic, nor even Christian, but a pagan. Learning more of the faith from the Jesuit missionaries, she was drawn to the beautiful and hopeful truths of Catholicism, and Tekakwitha was duly baptized into the Church on Easter Sunday, April 19, 1676, taking the name ‘Kateri’ in honour of her patroness, Saint Catherine of Siena.

In the four years that remained of her short life, Kateri’s routine was one of work, prayer and penance, the latter sometimes excessive, sleeping on thorns, burning herself in solidarity with the victims of torture, eating little. These were moderated by her spiritual director, the Jesuit Father Chauchetière, and Kateri submitted to his obedience, which in the main is always better than sacrifice.

Her reputation as a saint grew during her own brief lifetime, and when she died peacefully on the 17th day of April, which was also Holy Wednesday in 1680, miracles began at once, beginning with herself: Witnesses relate that her scarred, swollen face within minutes of her death became smooth and beautiful; people saw visions of her on her way to paradise, and she continues her work from heaven, a Canadian version of Saint Therése (who died at the same age, 24, along with Pier Giorgio Frassati, now that I think of it, all of whom went their true homeland ‘straight as an arrow’, as was the explicit desire of the Carmelite of Lisieux; after all, why dally?).

Saint Kateri body’s lies encased in a sarcophagus in St. Francis Xavier Jesuit mission church on Kahnawake, the reservation on the outskirts of Montreal, near the spot where she went to eternity, and where Kateri’s Jesuit spiritual director had built a small chapel soon after her death.

Saint Kateri is now one of Canada’s spiritual bodyguards (God does not much consider physical strength), and we need all the protecting we can get, as the Evil One prowls around looking for souls to devour: Not least, Kateri’s example of purity is an antidote to our immersion in sexual deviance of various varieties, now foisted upon most of our children through Kathleen Wynne’s pornographic and scandalous ‘sex-ed’ program, beginning at the very dawn of reason and innocence. Might as well corrupt the bud in its infancy, as the Devil might reason; after all, as the Evil One also thinks, why wait?

Saint Thomas was well aware that there’s nothing like lust to numb and blind the mind to the truth. We are awash in sexual malfeasance and its vitiating effects, so many consciences deadened, the lamp of the soul cold and dark.

Of course, there for the grace of God go each one of us; but to be aware of the evil is the first, and most fundamental, part of the battle; as Pius XII warned, the greatest sin of our century is the loss of the sense of sin. Yet, even the mention of ‘sins of lust’ in these environs, to say nothing of a young person’s intent to remain ‘pure, chaste and virgin’, would be to invite a mocking snicker, if not an outright rebuke, as Kateri herself experienced in her own pagan and libidinous culture (but which had nothing on us). One must think long beforehand before sending one’s children into the moral quagmire that public education has become.

As Pope John Paul declared, the trivialization of sexuality is at the root of the hecatomb of abortion. Even in her early ‘pagan’ days, Kateri saw impurity as a great evil, the gateway to other greater evils, and perhaps her penance was in prophetic reparation what Canada would become, now immersed in transgender ideology. The body is not a tool to be used for our hedonistic pleasure or to use-and-mutilate-at-will, then discarded when the party’s over and things begin to sag, but rather the very temple of the Holy Spirit, the visible and tangible expression of our souls which, as body-soul ‘persons’, display the very image of the Trinitarian God.

All that the same God asks of us is that we strive to live lives of virtue, and avoid the wages of sin, which in a mysterious way sow the seeds of corruption for eternity.

In this joyful season of Easter, we can look forward to the day when, like Saint Kateri, we receive this body back at the end of time, free of any spot, wrinkle or smallpox scar, youthful and glorious, and hopefully, like her, bring many with us.