For the feast of Saints Anne and Joachim on July 26th, just prior to the papal visit, I went on pilgrimage to the shrine of Saint Anne de Beaupré, dedicated to the mother of the Blessed Virgin, and the grandmother of Our Lod. We may as well put a word in also for poor Joachim, the father and grandfather, who is often left in the background.

I accompanied two recent alumni, who had never been to la belle province, and their own spiritual delight in seeing these holy sites for the first time – but hopefully not the last! – added to my own. Here are just a few highlights, which I post here for our readers, not least for those pondering their own pèlerinage.

We first went to Montreal, making our way up ‘Mont Royal’, to see the cross that stands atop, looking over, and after, the city. The sun was cooperative in my photo, as we arrived just in time. 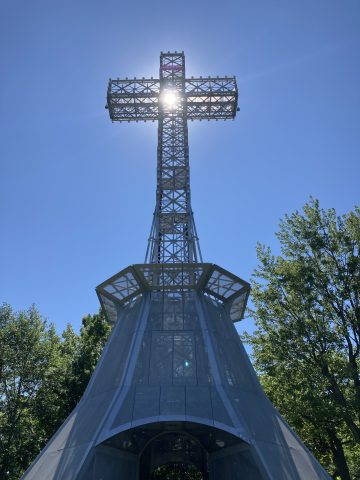 There is a whole system of trails and roads to reach the site, and with a bit of effort, well worth it, from the chalet not far from the cross, one can see the panorama of the city and the Laurentian mountains stretching into the distance.

We then wandered through the old part of the city, near the waterfront. Our destination was the tomb of one of the first, and one of the holiest, residents of Mont Royal, Saint Marguerite Bourgeoys (+1700). Her tomb in the original chapel of Notre Dame de Bon Secours is a must-see, both spiritually and historically. Atop her sarcophagus is the eponymous miraculous statue of Our Lady, which you can just see, if you peer closely:

After that, we drove about 11 miles or so outside the city, to the Kahnawake reservation, where the relics of Saint Kateri Tekakwitha reside, in the small church dedicated to Saint Francis Xavier. The church was closed (it is only open at select hours during the week), but we prayed outside, looking over the canal, to the city beyond, with the dome of Saint Joseph’s Oratory dominating the skyline. What was this like in Kateri’s own day? Her spiritual witness is profound, and she has much to teach us, especially our youth. 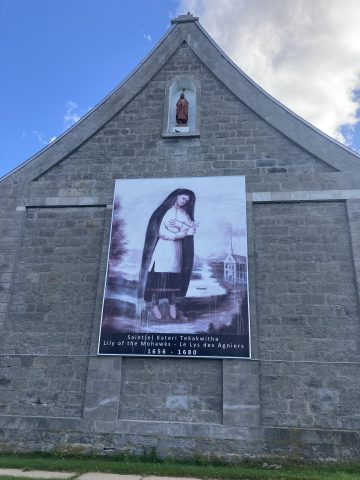 Early the next morning, we departed for the 10:30 feast day Mass at the shrine of Saint Anne de Beaupré , about half-hour north of Quebec City. I was pleasantly surprised at the orthodoxy of the celebration, with a full organ, polyphonic choir, and even some Latin amidst the French and English. The original church burnt down in 1922; construction on the current massive basilica began in 1926, with the interior not completed until 1946, after the doldrums of the Depression. Our Lady, standing atop the soaring edifice, looks over the bucolic countryside and the Saint Lawrence. 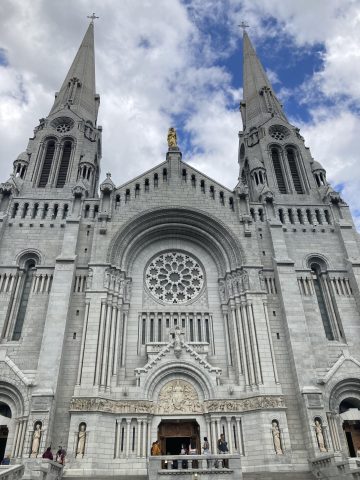 After Mass, and some prayers on the site, we then left for Quebec City. On our drive through the main thoroughfare, a motorcade whipped by us, sirens blaring, with four or so black SUV’s, followed and preceded by too many cops on motorcycles to count. I thought it was Trudeau on his way to the Chateau, but it may have been the Pope. Then again, wouldn’t he have white SUV’s? I read recently that he is indeed driven around in a white Fiat. Regardless, we prayed for whomever it was.

We spent the evening with a delightful Quebecois couple in Sillery, just outside the vieux ville, who had offered to put us up for the night, and we were warmly welcomed. Just after our arrival, our host mentioned that this was the birthplace of Blessed Dina Belanger, and my heart lifted, for I have a great devotion to her. Not only via music, and that our own choral program at Seat of Wisdom is in part dedicated to her, but my brother’s first two children were born on her feast day, September 4th. It turned out her tomb is in the convent a ten minute walk from the couple’s house, and we received a guided tour from one of the Sisters, ending up with some precious prayer time before her earthly relics: 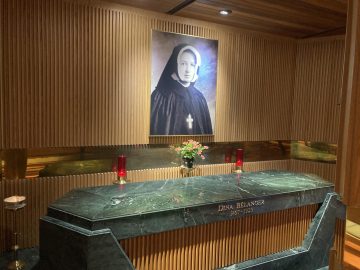 After that, we toured the church where she grew up, Saint-Michel’s, which commands a panoramic view overlooking the Saint Lawrence. Not only that, but, as I was told by our guide and host, this was also the spot where the Jesuits would depart for their long trek to Midland, to their missionary work amongst the Hurons and others. In front of the church are life-sized statures of the Canadian martyrs. It was a delight to pray Vespers there, and imagine what it might have been like 400 years ago:

Our gracious hosts then offered us a scrumptious meal of steak and roasted potatoes, followed by some music sung together, breakfast in the morning, and fond farewells.

We drove then to our final destination, Cap de la Madeleine, just outside Trois-Rivieres. We decided to take the scenic route, Highway 138, highly recommended over the bland highway, if you have the extra half hour or so. I had cycled this route years ago, from Montreal to Quebec City, and have very fond memories of the countryside. It runs for much of its length right along the Saint Lawrence, with fine views of the longitudinal farms, stretching down to the water. Plus, along the way are the majestic churches built by the habitants in the glory days of Quebec. They are kept open by the government, functioning as parishes, but also as tourist sites. On that previous bike pilgrimage, I think I stopped at every church along the way. This time, we chose just one, right off the road, fittingly dedicated to Saint Anne, in the little down of Sainte-Anne-de-la-Pérade, a masterpiece of sacred architecture, with a mini-museum in the side of the nave displaying beautiful copes and vestments and sacred vessels. My one regret was that they were not put into actual use: 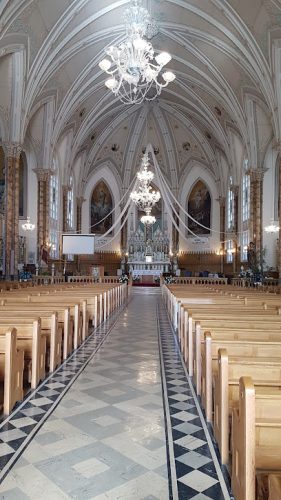 We finally arrived at Cap de la Madeleine, and the shrine to Our Lady of the Cape, the principal Marian patron of Canada. You may read the miraculous story of the statue here, and how it came to life in the presence of Blessed Frederick Janssoone and two others. The Virgin remained a statue for us, but we can hope still that she heard our prayers, and took them to the heavenly Father.

There is much that we did that is not written here, and so much more that one could do and see (not least Saint Joseph’s Oratory, but more on that in another post). One could spend a lifetime in Quebec, and still not see what this most historic and Catholic of our provinces has to offer. It really is a living ‘sacramental’, with so many churches, shrines, wayside chapels dotting the land, and almost all of the towns, cities and villages are named after saints – Saint Philip Neri, Saint Anne, Saint-Charles-Borromée…Would that all of Canada, and the world, had that custom! Most of these places boast splendid churches, relics of a bygone era. Yes, few people attend, the church is in free-fall, as are morals and demographics in la belle province. In what few marriages there are, women are forbidden by law to take their husband’s last name; children are confused and families fragmenting. Despair is rampant, euthanasia – legalized in Quebec three years before it was in the rest of Canada – is widespread and growing, as is abortion, IVF, divorce, shacking up. Homosexuality and transgenderism are now completely ‘normalized’, and a secular, syncretic religious education enforced on homeschooling families.

Yet, and yet, the Faith is there, as we witnessed in our lovely and gracious hosts. The Mass for Saint Anne at the shrine was full, as was the line-up to get into Notre Dame basilica. Perhaps they were mainly tourists – the latter case, almost for certain – but there is hope that God’s chosen land, where Christ’s salvific message was first brought to these shores, will one day return to the Faith of les aïeux – their forefathers – again bear much fruit, likely not without much suffering.

Je me souviens is Quebec’s motto. I remember. Let us in truth remember the saints who came before us who stand in witness, as do the monuments to them, and their very relics and bones crying out from the earth to heaven.