In light of the tangled and controversial implications of the recent motu proprio Traditionis Custodes – the irony of which title still strikes me – I thought I would throw my own two cents into the treasury of liturgical debate, in part since I am teaching a course on the Sacraments this upcoming semester, and such may help me clarify my own thoughts. As the old adage has it, we write to learn what we think. And what better day to begin than on this memorial of the Cure d’Ars, who so loved the Holy Mass…

For full disclosure, I have only attended what is known as the ‘Traditional Latin Mass’, or the usus antiquior, rather sporadically, partly due to circumstances, and in part, proclivity. Yes, some might think, tua culpa. But for much of my life, I have striven to do what little I can – reading, cantoring, chorusing (or is that choristering? Just so long as it’s not carousing!) – to help in some small way dignify the Mass in my local parish. That said, I have come to appreciate the usus antiquior more and more, and am with Pope Benedict, that this Mass should inform and guide the ‘new Mass’. But more on that in a moment.

For now, it may help to take a step back, and ponder what a sacrament really ‘is’ in a metaphysical sense, and why we want to to keep the TLM alive and well and flourishing. For liturgy is not about what we like or don’t like, but about the work God has done and is doing for our eternal salvation, unto the end of time, which the Church has received and hands on through Tradition.

And where else to find the answer, but the great Thomas Aquinas.

A sacrament is a kind of sign as Saint Thomas puts it (III.60.1), something that points to something other than itself. We humans are signifiers by our very nature, and almost all that we do, say, evoke, build, write, compose, has some deeper significance. Our houses are more than four concrete walls and a roof; our romantic relations more than producing viable offspring; our meals more than caloric intake; our clothes more than keeping out the cold and rain; and our speech more than conveying information. We are always signifying something more than the thing itself, even if that ‘thing’ is often a mystery, perhaps, of which even we ourselves are only dimly aware.

The seven sacraments are unique kinds of signs, for not only do they point to the very mystery of Christ and His salvific work, but the complex panoply of signs comprising the various liturgical rites – words, actions, bread, wine, oil, music, along with various other symbols – also make present in a mystical way a reality far deeper and richer than the sign itself

Two things to keep in mind:

First, a sign must be like the thing it signifies, for otherwise it obscures and hides this deeper reality. The water in Baptism is something that cleanses us bodily, and hence is a fitting sign for the supernatural reality of spiritual purification and rebirth.

The bread and wine at Mass do signify a meal, but more specifically they signify a sacrificial meal, and ultimately the sacrifice of Christ at Calvary. Hence, the rite of the Eucharist should signify that solemn sacrifice, with the priest both sacrificer and sacrificed, as befits his role as the alter Christus.

Second, all the sacraments are given to us by God, through His Christ, Who handed them onto His Apostles, whose successors safeguard and hand on the sacraments through the ages, unto the end of time. This only makes sense, for the sacraments are not ours, but God’s, for only He perceives and can bring about the ‘deeper reality’ of the sacraments. The signs He instituted are our link and our access to this fullness of truth and grace.

For us to make up our own sacraments, or even to de-form them according to our whims and proclivities – even for good intentions! – would not only be an act of hubris up there with Babel, but, by doing so, we would be in grave danger of obscuring and ultimately effacing this access to what God desires to give us – namely, His own life through grace. Even if the essential sign of the sacraments be retained, they would work less effectively, for we would gradually lose faith in them, and in the deeper realities – all the truths of our salvation – which they signify. Historical evidence bears this out, in the Protestant sects who tried this, with most such ecclesial communities now in their liturgical and moral death throes, and we may wonder why modern Catholics want to follow their steps.

‘For this reason no sacramental rite may be modified or manipulated at the will of the minister or the community. Even the supreme authority of the Church may not change the liturgy arbitrarily, but only in the obedience of faith and with religious respect for the mystery of the liturgy’ (1125)

In fact, any modification of the liturgy has definite limits:

In the liturgy, above all that of the sacraments, there is an immutable part, a part that is divinely instituted and of which the Church is the guardian, and parts that can be changed, which the Church has the power and on occasion also the duty to adapt to the cultures of recently evangelized peoples. (1205)

How far this ‘change’ might go is the central issue before us. Until the modern era day – that is, the 1960’s – the Church was quite strict and parsimonious on liturgical change, permitting some prudent pruning and addition, but not wholesale restructuring.

So to the Motu Proprio: The Novus Ordo is a valid and licit Mass, even if its instantiation and current celebration have in the decades since the Council has left much to be desired. We need not belabour this point, so a brief list may suffice: Inaccurate and insipid translations; myriads of lay ministers, sans liturgical clothing, or much clothing at all, looking to ‘actively participate’; guitars, drums, secular, treacly, if not outright bad, music; milquetoast, banal sermons; screens and projectors and over-amplification; jokes, interjections, greetings and smiles a-plenty; forced ‘happiness’ – The list could go on, but all in all, a vague, worldly, effervescent fog pervades the liturgy, smacking too much of an ersatz performance, all of which obscures what the Mass really is: The sacrifice of Christ on Calvary and His Last Supper, which was itself that same sacrifice in signification; not a happy-clappy love-fest. (See here for Evelyn Waugh’s experience of Mass after the Council)

As mentioned at the first, and as Pope Benedict prescribed, the novus ordo should be informed by the usus antiquior. (What he actually said was that the two uses should ‘mutually inform’ each other, which raises questions we may ponder soon). At the very least, the ‘New Mass’ should somewhat like the ‘Old Mass’: Some Latin and chant, given ‘pride of place’; priestly solemnity and dignity; rich, erudite sermons; facing ad orientem; and an atmosphere of transcendence and ‘other worldliness’, all of which were mandated, or at least presumed, by the words of the Council itself. And would not organic development require no less?

Yes, abuses may bound in either use, for the Old Mass may be said in a distracted, hurried, mumbled manner, and there were elements that needed reform. What is said of the Church holds also for the Liturgy: semper reformanda est. But the very immutability and solidity of the pre-Conciliar rite made, and makes, abuse more difficult; regardless of how badly it may be done, it still looks like a sacrifice. What seems clear is that without the ‘Old Mass’ as itself a sign and model, the celebration of the ‘New Mass’ may well drift even further.

Hence, it is disconcerting that the Holy Father would seek to limit, even eventually remove, 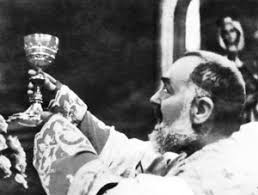 access to the usus antiquior, itself one of the most ancient and venerable of sacramental rites, said by every priest in our history until the heady days of the sixties: the Curé d’Ars, Philip Neri, Edmund Campion, Cardinal Bellarmine, Philip Neri, Thomas Aquinas, and saints uncountable. It can be traced back in substance not just to Trent, which simply codified what rite was already celebrated, but at least to Pope Gregory I, likely to Saint Jerome (around which time the liturgy became Latin) and further back, in all likelihood, in some way to the Apostles themselves. Hence, what we know as the TLM is, as its acronym implies, a solid and direct link to our Tradition, and what the Mass really signifies.

Or, in other words, how we believe, think, act and live depends almost entirely upon how we pray. Prayer and worship come first, and are foundational, primary and indispensable.

We should remember that God does not need our worship (Psalm 50) – it is we who need to worship God, offering a true ‘sacrifice of praise’. For the only way we can believe and live rightly with one another, is to first live rightly with God, by giving Him what He desires, done primarily through the sacraments.

If we worship according to our own whims and desires in a manu-factured liturgy – literally, one made with our own hands – then, as God Himself warned throughout the Bible – from Cain, to Babel, to Aaron and the golden calf, to the Antiochean apostasy in the time of the Maccabees – we are in danger of worshiping not the Creator, but the creature; not Him, but ourselves – or worse.

It is a sad fact that liturgical abuse abounds, with many Masses across the globe are not celebrated according to the intentions of Christ and His Church. We must resist such continued de-formation, unhinging from Tradition, and the obscuring of the sacramental signs God has given us.

There is more to say, not least on the (dis)connection between the Mass, as it is now usually celebrated, and the Council’s own directives. For now, let us conclude with what may be an understatement, that we would all be a lot poorer with less of – even worse, without! – the usus antiquior. We may have faith that God has His plan in all of this, and if the current Motu ironically moves many more to appreciate Tradition and what all the fuss is about, whence we have come and whither we might go – well, then, who knows to what great good this may lead?