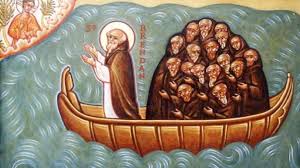 Saint Brendan (+577) the sixth century Irish monk, called the ‘Navigator’, is reputed to have discovered Canada a full millennium before John Cabot’s – Giovanni Caboto – claim in 1497. In his semi-mythical recounting, the immram known as Navigatio Sancti Brendani Abbatis (the Voyage of Saint Brendan the Abbot), our saint and sixteen of his fellow monks embarked on a seven year trans-Atlantic voyage in a boat made of animal-hides.

Of course, as may be expected, many now consider his journey a pious legend, a fanciful mediaeval tale like many others (and it does contain a number of odd elements, islands that hurled fire and rocks, to giant whales they thought were islands).  That is, until the voyage was re-travelled, with the same mediaeval materials, the same leathery boat, by the dauntless Tim Severin in 1978, chronicled in the book and film The Brendan Voyage, demonstrating that Brendan’s voyage was at the very least eminently possible.

Saint Brendan set up monasteries across Ireland, including one on the Arran islands, as well as on the west coast of Scotland, Wales, and he even evangelized the north of France, in Brittany and beyond, before returning to Ireland for his final years in his own monastery of Annaghdown. Brendan was friends of Saint Columbkille of Iona fame, and is considered one of the ‘Twelve Apostles’ of Ireland. His remains lie in Clonfert cathedral, which goes back to the 6th century.

There are many things that Brendan can teach us, but one of them is that history is not quite what we think it is. The ‘Whig’ version is that we are always advancing, that we are superior to our forebears, but ‘tis not always so. Advance is possible, certainly, in some areas, but so is regression, evolution along with devolution.  In fact, the second law of thermodynamics states that greater perfection can only be achieved by expending mental and physical energy and effort, without which things generally proceed into entropy and chaos. Mediaeval Man – nay, even pioneer Man – seems to have displayed a vigour and dynamism that we have lost. Could we now build a Chartres? Settle the wild west?

Who is to say that the monks, and the contemporaneous Vikings, did not have better boats than we?  Certainly, the Romans were far more adept at building natural amphitheaters.  To this day, you can hear a pin drop on the stage even in the ruins of one of their outdoor auditoria, utilizing to the maximum in some mysterious forgotten way the surrounding natural features, while we still struggle to build decent concert halls with all of our ‘space age’ materials (cf., the expensive renovation of our own already-lavish Roy Thomson Hall in 2002 due to the poor quality of its acoustics).

Certainly, on the spiritual plane, we have much to learn from our ancestors, which is why the Catholic Church remains so immersed in tradition and history, in her saints, their writings, their experiences, even their journeys and the people they evangelized.  We ignore to our peril the great holy men and women who preceded us, and, as Chesterton alludes, one of the unholy evils of ‘modernism’ – amongst the many of that multi-headed hydra that Saint Pius X described as the ‘synthesis of all heresies’ – is that something is better just because it is new.

Many times, however, it is the old that is truly good and truly true.  At the very least, it has stood the test of time. Tradition, as Tevye from Fiddler on the Roof would sing – which we neglect to our peril.

In the present context, I for one like the pious thought that an Irishmen discovered Canada many centuries before an Italian.  But, then again, they both claimed Canada for the Church, so either way, Canada was, is and should be, in the best sense of that term, Catholic. We should all start living in accord with our spiritual birthright.