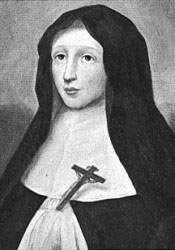 We have celebrated a number of ‘Catherines’ of late in our liturgical calendar, two of them Canadian: Kateri Tekakwitha on April 17th, the native convert who adopted the name of Catherine of Siena (April 29th) when she was baptized; and, today, Blessed Catherine of Saint Augustine (+1688), venerated as one of the ‘six founders’ of the Church in Canada.  Saint Franҫois de Laval, whose feast we celebrated a couple of days ago on May 6th, is also amongst that august number, the first episcopus of the vast diocese of ‘Quebec’ (even more extensive than Quebec is now).

Catherine de Simon de Longpré, as she was born on May 3, 1632, in Normandy, France, just as the missions to ‘New France’ were beginning, (the colony had been officially founded in 1608, with missionaries soon afterward). She chose her vocation decisively and early, as should ideally be the case, giving her life to God at the tender age of 16 (then, a more mature age than now, when the devotion of most 16 year-olds tends more to FaceBook and Instagram than to missionary orders and evangelizing the new world). Catherine joined the Canonesses of Saint Augustine of the Mercy of Jesus, choosing the name of the great bishop of Hippo as her name in religion.

Her order was the first to send consecrated female religious to the far-off and austere colony on the rugged and rocky shores of Quebec, and she arrived here in 1648 in the midst of political and cultural turmoil, a year before the great saints Jean de Brebeuf and Gabriel Lalemant met their horrific end at the hands of the Iroquois in Midland, 800 miles to the west. Sister Catherine devoted her life to the colonists and natives, with concentrated effort learning the latter’s language, offering up prayers and penances for her spiritual and apostolic work. She fell gravely ill upon her arrival, and her cure at the intercession of the Blessed Virgin she considered miraculous.

Sister Catherine was one of the founders of Hotel-Dieu hospital, spending her life tending to the needs of the patients in body and soul. The hospital is still going strong, technologically more advanced, but apostolically and spiritually not quite what it once was. She was always of cheerful and hopeful disposition, even in the most trying of circumstances – a fruit of her deep asceticism – and went to her eternal reward on this day in 1668 at the still-tender age of 36 at the hospital she had helped found, universally venerated as a saint, and beatified by Pope Saint John Paul II in 1989.

Santa Catherina, ora pro nobis, that, in these times of grave spiritual doubt and angst, Canada may discover the original source of her strength and vitality, the great enduring power of Faith, so that what she was once was, and she may yet be again.

Twenty Seventh Sunday: Esther, Our Lady and the Message of Fatima

Thérèse of Lisieux of the Child Jesus and the Holy Face

Story of a Soul