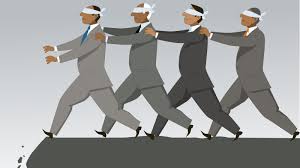 By now, avid sports fans throughout the Western world and anyone who follows the news regularly, will have heard of Serena Williams’s blow-up at this year’s US Open finals. Williams was competing against the seventh ranked player in the world, twenty-year old Naomi Osaka. Osaka in their only other meeting (earlier this year), had beaten Williams quite easily. Despite the surrounding controversy and several distractions, Osaka was able to win the finals with relative ease. Williams’s incident raises relevant issues related to groupthink and identity politics with its negative effects on moral responsibility.

The chair umpire of the match, Carlos Ramos, a seasoned and well-respected umpire for the International Tennis Federation (ITF), who is known for his toughness with top players, gave Williams three code violations. Ramos first gave Williams a warning for receiving coaching. Interestingly, Williams’s coach, Patrick Mouratoglou, admitted to coaching through hand signals. However, Williams adamantly denied this at the time. Williams then on the changeover was demanding an apology from Ramos. She broke her racket and received a second penalty, resulting in the loss of a point. From there she accused Ramos of “stealing” a point from her, where she stated: “You will never, ever be on a court of mine as long as you live. You owe me an apology.” Then demanding that he say “sorry” and calling him both a thief and a liar. He then gave Williams a third code violation for verbal abuse of the umpire which resulted in a one game penalty. The result was that Williams was only fined $17,000 USD. This is not the first time that Williams has been involved with similar controversies at the US Open. She has been known to hurl abuse at umpires for administering her penalties for bad behaviour.

Williams later made the claim that Ramos was sexist, since men, she argued, were not penalized in the same manner for similar behaviour. Many articles have come forth backing-up Williams. The Women’s Tennis Association and the United States Tennis Association also corroborated Williams, while the ITF backed Ramos. What is worth noting is that Williams’s claim is at odds with the evidence, as tennis correspondent, Simon Briggs affirms: “there were 86 code violations handed out to male players at the US Open, and only 22 to women. Now, a more detailed analysis of the past 20 years of grand-slam events has revealed a long-term split of 1,534 to 526.” It is also worth noting that Fabio Fognini, a top Italian tennis player, was rightfully kicked out of last year’s US Open for spewing profanities at a female umpire after a bad loss to a fellow countryman. This took him out of the third round of doubles at the US Open. Again, contrary to Williams’s allegations, this clearly shows that there are strict consequences for the actions of both male and female tennis players. Nevertheless, there is an increasing number of code violations given to women for receiving coaching, but this is not necessarily a good argument in favour of sexism. It could be that women just receive more on-court coaching from their team than male tennis players. Bob Christianson, a 67-year-old umpire who has worked 38 consecutive majors had the following to say about the allegation of sexism: “That’s the worst brouhaha I’ve witnessed in my 40-plus years of tennis officiating… I did a lot of McEnroe matches. He wouldn’t go on and on, minute after minute. He would have, at some point, calmed down because he feared a game penalty. But she didn’t.”

Adding more fuel to the fire, shortly after the controversy, Australian cartoonist Mark Knight depicted Williams’s tantrum on the court. As to be expected, the social justice mob, led by the hypocritical virtue signaling social justice warrior extraordinaire herself, JK Rowling, condemned the cartoon as being sexist and racist. Knight defended himself by stating that the cartoon was about bad behaviour and had nothing to do with sex or race. Interestingly, days before, Knight drew a cartoon mocking Australian tennis players Nick Kyrgios but there was no criticism of race or gender of that cartoon.

It is no surprise that Knight received threats directed towards him and his family because of the cartoon. He has subsequently suspended his own account. It’s surprising that Twitter has not removed him, as they have done on several occasions for conservative thinkers like Alex Jones, Roger Stone, Vox Day, Milo Yiannopoulos and others. Yet, these types of attack are so typical of the politically correct social justice mob. It is a trademark of Marxist and postmodern thought, namely, the oppressor versus oppressed narratives. In the name of social justice and equality of outcome, the alleged “oppressor” must be destroyed at all costs. This is the result of ‘groupthink’, which is unthinkingly accepted in our society. Instead of taking responsibility for one’s actions, the blame is always shifted elsewhere. It’s simple, Williams was wrong and acted in a bratty narcissistic self-entitled manner. This is not the message that a champion should be relaying to the champions of tomorrow.

Groupthink is clearly dangerous, and its pressures are real. Think of the peer pressure students must face throughout high school to engage in ignoble acts. We can also reflect on the Trump derangement syndrome (TRS) where a myth has been built around the American President. Even in Canada, I know of parents/teachers who tell their children to hide from Trump if they ever were to encounter him (not like this will ever happen) but the point is that ‘TRS’ is well and alive outside the US, In large measure, this is due to how he has been painted by the mainstream media and leftist ideologues (which comprises the vast majority of school teachers throughout Canada) as a terribly evil man. This myth involves confabulations such as his collusion with Russians and allegations of being a racist and fascist. Whenever I’ve asked someone why they believe Trump to be a racist or a fascist, they are usually silent or provide very weak arguments to support such outlandish claims. Ironically, the evidence points toward his enemies (the Democrats and typically left-leaning individuals) being deeply entrenched in the very things they accuse him of. These things have been well documented by Dinesh D’Souza in his latest books and documentaries. It is Trump’s critics who are guilty of these charges; they engage in racism through setting up abortion clinics outside of African-American ghettos while providing subsidies for killing unborn black babies; it is the leftists that are controlling media platforms and are silencing conservative voices; it is the university administrators who allow groups like Anti-Fascists to shut-down conservative speakers; and there is growing evidence pointing towards Hillary Clinton’s and the Obama administration’s collusion with the Russians to entrap Trump. The left has a remarkable ability to spin these things off, as though the side who actually opposes these things, such as Christians, conservatives and libertarians, are the ones engaging in them. In psychology, this is called transference (a term coined by Sigmund Freud); where the victimizer switches things around to appear as the though they are the one being victimized. So, as fake-new goes: you either buy into this false narrative or you will be discredited and/or demonized. Further consequences include being removed from media platforms such as Twitter, FaceBook, and YouTube.

But of course, groupthink is nothing new and it has its obvious allure, i.e., to avoid being ostracized and to conform to what the majority believe (despite its falsity). It is predominantly based on ignorance and fear. It is what the late literary critic, Rene Girard, named the “mimetic contagion” where people become possessed by the mentality of a particular crowd which from an anthropological perspective becomes “all powerful.” An example of this would be Saint Peter’s three acts of denying Jesus, which are multiply attested to in all of the four canonical gospels (Mark 14: 66-72; Matthew 26: 69-75; Luke 22: 55-62; John 18:15-27). If Saint Peter was unable to resist such groupthink (mimetic contagion), all the more worrisome for the rest of us. In modernity, the power of groupthink has altered much of Christianity (including the views of whole denominations and priests and officials within the Catholic Church) to submit to the “spirit of the times,” on a number of moral and social issues (e.g., abortion, assisted suicide, same-sex unions, transgenderism etc.).   Girard suggests that the only way to conquer this is through the power of Christ. Christ’s example and continuous presence in our lives emboldens us to live out the truth, adhere to objective moral values and duties, and take responsibility for our actions. Thus, instead of shifting the blame on everyone else, we must be accountable for our own actions.

In the era of social justice and identity politics, individual responsibility has been done away with. How is one going to hold a particular group accountable for the actions of an individual? Whether they are identified as the oppressor or oppressed? It just does not make sense. The point is that the actions of an individual are on the individual not on their “identifiable” group. It is easy to label something, for instance as sexist, since it plays into identity politics and dismisses the importance of evidence and reason, while pointing to women as an oppressed group in this case, Williams and men as the oppressors, such as Ramos. Individual responsibility is the commonsensical point of view, one that Martin Luther King Jr., advocated for. If anything, blaming or giving special protection to a group for an individual’s actions goes against the principle of justice.

The truth is that Williams made a mockery of the game of tennis, at one of the most important tournaments in the world. She not only disrespected Ramos (a seasoned umpire), but also tennis fans, Osaka, and even herself. It was appalling behaviour for a twenty-three-time grand slam champion. Williams should take the high-road and offer an apology for her despicable behaviour to Osaka, Ramos and her fans. This will help bring her out in a proper light, through taking moral responsibility for her irresponsible actions and demonstrating that she has the humility to publicly acknowledge when she’s wrong. This is especially what is needed in our troubled and confused times, amidst a culture which is unthinkingly, yet inconsistently, inclined toward moral and metaphysical relativism.