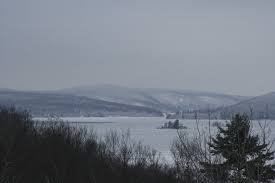 When I first left my home in the warm peninsula of southern Ontario to pursue a post-secondary education nothing could have prepared me for the extraordinary cultural hiatus I was to experience. A small institution, isolated in a northern part of the province (editor’s note: the school is in fact still well in ‘southern’ Ontario, if a few hours north of Toronto), had accepted me for studies and I was eager to be immersed in the full depths of academia. Having been reared in the tropics of Canada, I was unaware that my childhood lacked the most fundamental part of Canadian heritage – winter. Consequently, when I arrived in that small town in late August, I was unprepared for the upcoming dark months already being foreshadowed by the locals, who spoke of winter in whispered and reverent tones.

When October arrived, and the first bite of cold began to nip at my vulnerable skin, I panicked; I owned nothing that would help keep me warm during the forthcoming months. With haste, I ran to the outpost and ordered the necessities: a heavy snow coat, boots, gloves, an insulated tuque, snow pants, and thick woolen socks. Prepared, I stepped out into the open world when the first snow fall blanketed the landscape, but as I greeted passersby and fellow students I noted that I alone was dressed as one concerned with the deathly chill of winter.

For the first month I assumed that the locals’ nonchalant attitude toward winter clothing was attributed to thick skin or the warmth of liquor, but when the thermometers read negative forty and the hairs in ones nostrils began to freeze together with every breath I began to consider it insanity. However, one day a close friend, tired of being embarrassed by my intolerance to the cold, let me in on the secret. “When dressing for the cold,” he said with a confidence beyond his years, “the only thing you need to remember is to put on your long underwear.”

This notion was quite foreign to me. Never before had I donned the long underwear –often called long johns by men who found underwear an odd thing to discuss and tights by women who felt the term more closely associated them with the grace of a ballet dancer. But the effect of this simple layer was immeasurable; an application of long johns directly beneath one’s normal trousers simply seemed to dissipate any cold. Needless to say, this technique was adopted immediately and served me well during my following years at that school.

Nevertheless, as my time in that frozen place came to an end and I moved on to a new school much closer to the part of Ontario which the sun cared to keep warm all year long, I did not leave my long underwear behind. However, during the next year, a true Canadian winter never visited me at this new school and my faithful long johns remained unused.

Still, it was this year, during winter’s extended retreat, when I was confronted with an incomparably unfortunate incident. On this day, I arose early in order to catch a city bus to the school. It was a mildly chilly day, but one where a single layer of slacks would easily fit the bill. Arriving, I walked up to the academic building and stood aside to open the door for the young lady I knew was only a few steps behind me. But as she walked by I was taken aback and a stark expression overcame me as I realized that this woman was without pants.

It is a commonly known fact that women are often chilled by the cold much sooner than men, and for this reason it was understandable that this women had chosen to make use of long underwear this morning, or tights as she doubtlessly called them, but what an embarrassing thing to leave one’s house having forgotten to pull pants over top of this intimate layer. I was unsure of what to do. Someone had to tell her before she walked through that hallway into the commons of the school, where its inhabitants would surely gawk and laugh at her humiliating blunder.

I nervously called out to her: “Miss!” She turned toward me sharply, and when I caught up to her I sheepishly informed her: “Miss! Excuse me miss, but you’re not wearing any pants, and everyone can see your underwear.” After reconfirming that she was indeed wearing the tights she had meant to she looked back up at me with a puzzled and threatened look, but then confidently proceeded into the school without the slightest concern for what she would reveal to the public.

Still stranger than that, however, was that as she walked around in the school no one seemed to find it strange and no one was found laughing at her mishap, quite the opposite in fact. Dressing without pants became a trend and took root as the normal winter attire for many females in this school. So that now, at least during the winter months, women in this school are often content with only wearing long underwear and go about in the hallways and from class to class without wearing pants. Now I only fear what the new trend will be, when spring comes, and it’s too warm for long underwear!