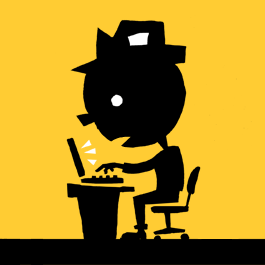 Computer technology, social media and its users have been stigmatized and blamed for much of the world’s problems. Everything from illiteracy to a decrease in IQ is blamed in part on technology and sometimes on blogs and bloggers themselves. And perhaps there is something to it? I mean, everyone and their dog (literally!) has a blog. Blogs are free, easy to start, and anyone can write anything about anything. Bloggers use the platform for their own agendas, which could range from the nefarious to the embarrassingly banal. But I have spent many an awkward moment having to defend myself as a blogger, and the last thing I want is to be lumped into the category of “Those Contributing to the Decline of Modern Western Civilization.”

Pope Emeritus Benedict XVI didn’t see it that way. In a conference on modern means of mass communications in 2010, he exhorted participants not to fear but to “set sail on the digital sea, facing into the deep with the same passion that has governed the ship of the Church for two thousand years … [W]e want to qualify ourselves by living in the digital world with a believer’s heart, helping to give a soul to the internet’s incessant flow of communication.” The problem wasn’t, and isn’t, technology itself. The problem is that believers aren’t taking over the Internet with the same zeal that ignited the missionaries and saints.

But that’s changing. The last few years have given rise to “blogging converts, online activists, and bishops who tweet” (to quote the title of a new book by Brandon Vogt) and conversation—and conversion—is happening because of it. Fr. Robert Barron, for example, blogs at his Word on Fire site, commenting on pop culture (books, movies, trends, etc.) as well as hot-button topics like same-sex marriage. To this day he has had over forty thousand comments posted to his video entries—many of them coming from un-churched, secularized young adults—and he is able to successfully evangelize to these “unreachable” people, both within the faith and without, through these virtual conversations.

For myself, I’d been blogging about a year when I noticed a theme appear in my writing—that of rediscovering authentic femininity. When a dear friend and I met up at a retreat and bemoaned the lack of a feminine presence in our society, our blog, The Feminine Gift, was born. We were both on personal journeys to know our own femininity better and we imagined that others were too—and we weren’t wrong.

True femininity has been slowly squashed and quelled over the last fifty years, and Tess and I were feeling it. Not surprisingly, so were others. Women seem to respond to our writing and through our blog we continue to encourage women to set the world on fire by being who God meant them to be— authentic Catholic women.

The thing is, technology is here now, like it or not, and we’ve not only got to make our peace with it, but we must use it to the best of its (and our) abilities. Darker forces certainly are doing so. Statistics are confirming two things. First, that the Church in North America is shrinking faster than you can say “Lord, have mercy” and second, that much of that shrinkage is due to generations of poorly catechized Catholics. We must do everything we can to bring them back to the Lord, and with a good portion of people tethered to technology these days, doing so couldn’t be easier.

St. Francis used to exhort his followers to do what was necessary, then do what is possible, and soon they’d be doing the impossible. Right now what is necessary is using every means at our disposal to spread the Gospel—including technology—with the “impossible” goal of bringing all humanity back to God.