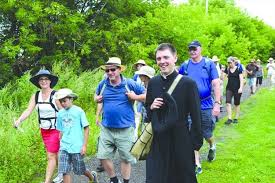 A brief note from the now-shuttered, yet still beautifully maintained, parish of Saint Joseph’s, on the Opeongo Line, as we, about 90 or so pilgrims, make our way from Our Lady of Fatima in Renfrew to the shrine of Saint Ann’s in Cormac. Begun by diocesan priest Father Scott Murray – a young and vigorous 32 year old with many more years of ministry ahead, currently pastor of Saint Anne’s in Mattawa, ironically enough – the pilgrimage is now in its fourth year, with each year adding more pilgrims to the ranks.

This is my first year and the walking has been, shall we say, rather on the warm side, rigorous, with many blisters – from which I have thankfully been spared – some sunburn, and, as the sun sets, clouds of mosquitoes, droning outside my tent.  I wonder what pilgrims of previous ages did before tents and fine meshing. Technology has much of a good side.

This is our stop on our second day, and we are greeted, if such be the word, by a statue of Saint Joseph which faces not outward at this parish, as is almost always the case. Rather, Saint Joseph is turned sideways, looking down the Opeongo Line, where those early settlers moved along, clearing the land as they went, taming the wild forests, turning them into productive farms, even if the land here be not easy. They built churches along the way, that still stand as a testament to the Faith that sustained them. As Father Murray put it in his homily, Joseph is a priestly figure, pointing – no, more so, leading – the way to both our earthly and heavenly homes. He does not have his ‘back to us’, but rather a father figure going the way before us. Something to be said for Mass ad orientem.

The closing of these churches – a difficult thing – signifies a change, in demographics, in church attendance, in our modes of transport. Back in the days before motorized vehicles, when most of the settlers still attended church on Sunday, a parish was needed within some reasonable walking or riding distance. Do we still need these ancient, small parishes every ten or twenty miles, with our paucity of priests and dwindling populations? Perhaps not, when a church that was once a two or more hour walk away is now but a ten minute drive. But there is still something lost, and a nostalgia washes over one when these once-vibrant parishes are now empty relics of an age gone by.

Yesterday, we stopped for the night at Mount Saint Patrick’s, itself a place of pilgrimage, with a holy and miraculous well – ’tis Irish, after all, and what would we do without a holy well? Miracles have been reported, some to me personally, not easily explicable by modern science, whatever that itself may mean. Faith really can perform miracles – or, more properly, allow miracles to be performed, for our hearts are often closed to, hardened against, the working of God. If people had but faith the size of a mustard seed, the world would be filled with wonders beyond our imagining.

The pilgrimage culminates after a suitably Scriptural three days of walking, the final challenge a steep climb up and then down daunting Plaunt Hill – with a refreshing dip in Lake Clear if one so chooses, followed by a glorious arrival at the shrine of Saint Ann at Cormac, where the bells peal to welcome the weary and foot-sore pilgrims.

One of the purposes of this pilgrimage is to rekindle that Faith, to pray for this region, for Canada. As today’s Gospel warns, there are wheat and tares, both found tangled in our hearts. We must do some spiritual weeding, as the time grows short, which it does for all of us, young, old and in-between.

Faith, to be real and sustaining, requires sacrifice, and we were not at a loss for opportunities on this walk: The heat of the mid-day sun, the sore limbs, exhaustion. Yet we were given far, far more in the way of joys and recompense: Friendships old and new; bold and invigorating conversation, eutrapelia, as Thomas might put it; vivid prayer, made more real by the rhythm of walking; nourishing food and warm hospitality; the beauty of God’s creation all around; music and song – chant and polyphony at Mass, and more secular varieties at other times; and the knowledge that we were quite literally following in the steps of those who came before, hardier men – and women – from a time where such strength and resilience was needed just to survive, and scarcely reflected upon. There was no need for gyms, yoga, curl bars and hamster-esque treadmills in those days.

A simpler time, in an age when we knew our end and our purpose, where life made sense, all things, the work, the prayer, the happiness and sorrows, offered up to the God Who sees and oversees all things, from the hair on our heads, to the overall vocation of our life. The pilgrimage is an opportunity to return to that simplicity, at least for a time, some aspects of which we may bring along with us in our return to the harried and hectic world we have created, for purposes that themselves seem mysterious.

As Christ said to Martha, only one thing is necessary, and blessed are those who find it, or, more to the point, Him.