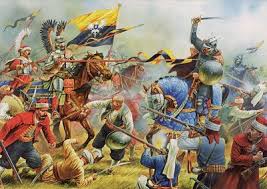 September 12th commemorates the Battle of Vienna, the great victory in 1683 of the Christians armies, led by Jan Sobieski, against the Ottoman Turks who were determined to conquer the Austrian city, the gateway to the rest of Europe. Against overwhelming odds, the vastly outnumbered Polish, along with forces from Saxony, Franconia, Swabia, Baden and Bavaria, crushed the Muslims under Kara Mustapha Pasha, sending them fleeing for their lives, breaking the power of the Ottoman empire, which had ravaged Christianity, in more ways than one, for centuries. Sobieski paraphrased Caesar after what he saw as his miraculous victory: Veni, vidi, Christus vincit. I came, I saw, and Christ conquered. Christ indeed won the day, saving Europe, the Faith and western civilization, at least until recently. There is a legend that the croissant, based the Islamic ‘crescent’, was invented at Viennese bakeries soon afterward, as a symbol of their deliverance.

The religious significance was not lost on the losers: The attacks on America on 9/11 were, in large part, a centuries-delayed Islamic revenge against the ‘Crusaders’. Kara Mustapha met his own demise more quickly, strangled to death by the Janissaries -kidnapped Christians raised to be fervent Muslim soldiers – for his ignominious defeat.

They hardly need bother with such dramatic mayhem. Europe’s refusal to have children, its population stabilized only due to immigration, now more or less ensures its own eventual suicide, leaving the once-great entity open to an invasion, if one wants to use that term, not of a military sort, but cultural and demographic. Peruse even a synopsis of the 1975 dystopic novel Camp of the Saints for what the near future may hold.

Jan Sobieski may well have declared Maria vincit, for today is also the memorial of the Holy Name of Mary, whose very name has been made sacred by the holiness of the Theotokos, the Mother of God, full of grace. It was Pope Innocent XI – a great and holy reforming Pontiff who resisted the Gallican ambitions of Louis XIV (who did not send any help to Vienna), who cleaned up the Vatican, and who condemned abortion, declaring the fetus to have a soul – yes, this same great Pope instituted this feast in 1684, in thanksgiving to the Blessed Mother for the victory at Vienna.  In the rather heady days of the late 1960’s, this memorial was removed in the revision of the liturgical calendar after Vatican II, perhaps in some misguided sense of ecumenical outreach, but placed back in by Pope Saint John Paul II in 2002, who knew more than most what was, and is still is, at stake.  So thank you for that, Holy Father.

The name of Mary is powerful indeed, for, as the wedding at Cana signifies, Christ cannot refuse a request from his mother. So ask away, whatever you will. May the Virgin Mary intercede for us all, when we need her help in our own turbulent times. As she said to Juan Diego a century before Vienna, ‘Am I not your Mother?’. So fear not, and have hope. The victory is Christ’s.

A final clarification on my diatribe against the modern university: I don’t mean to pick on any particular institution, and what I said of Queen’s, inspired, if you will, by my memory-inducing late-summer visit to its environs, applies to any of our socialist institutions of higher education. Yes, I will admit that there are still many aspects of intellectual and academic excellence on these campuses, but even  these are being undermined by the moral rot at their core (what other term can one use?) and the ideological biases that now guide, in dictatorial fashion, so much of their conduct. Just try denying ‘climate change’, materialistic evolution, abortion rights, the goodness of homosexuality or transgenderism, to offer but a few examples. As Josef Pieper wrote, the control of language is itself power, a sure way to control the mind itself.  Doug Ford’s attempt at enforced ‘free-speech’ policies from the highest levels of government, is a sad sign of how far things have gone.

So, again, caveat discipulus, and seek an education in truth, beauty and goodness, with all that entails.

Ans please do pray for our own students here at Seat of Wisdom today, as we hold our annual Day of Recollection, a retreat to start them off on the right foot, so to speak. For if we are not for Christ, for whom are we?