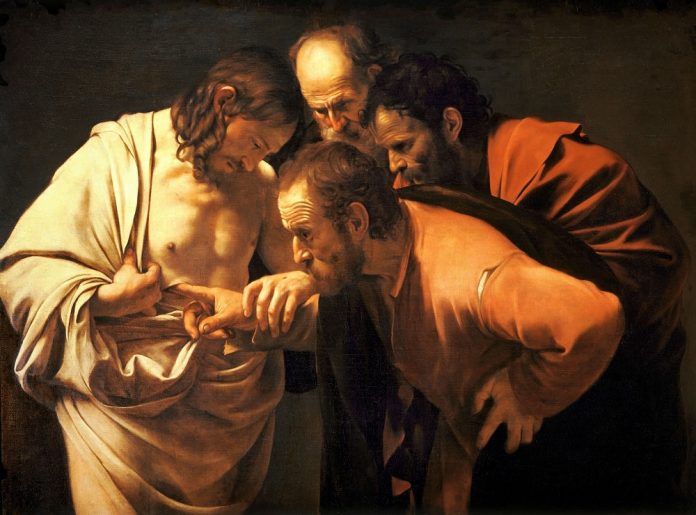 Today is the feast of Saint Thomas, the Apostle, who gets a bit of a bad rap as ‘doubting’ Thomas, a term is that needs a bit of refining (and I see it often used in a rather ambiguous manner, even in erudite and orthodox circles): To ‘doubt’ in the theological sense requires that one first have truth revealed to them, that they have accepted that truth with divine and supernatural faith, and then have allowed that faith to wither, to some degree. In the strict sense, ‘doubt’ is a sin against the virtue of faith.  As the Catechism puts it:

This follow from the nature of supernatural faith, which a future Thomas would define as an act of the intellect assenting to the divine truth by command of the will moved by God through grace (cf., CCC, #155; ST, II-II, q.2, a.9).

The last phrase of that definition is key here:  We believe primarily not because it ‘makes sense’ to us, but rather because of the authority of the One Who reveals, God Himself.  We can and should doubt in natural faith, wherein the formal object of our belief is some fallible human authority.  But to doubt God?  Cardinal Newman, who thought much of the nature of faith in his own spiritual journey, wrote that ten thousand difficulties do not make one doubt.  We can question, ponder, analyze, mull over, struggle with any number of the articles of faith, especially the ‘hard’ cases of evil, suffering, salvation, the Eucharist, and so on, but we cannot, or at least should not, doubt.

Thomas refused to believe his fellow Apostles when they declared that they had seen the living Christ, still with the marks of His brutal and death by torture and crucifixion. Thomas wanted empirical proof, to put his hands and fingers in the very wounds.

As we know, Christ does appear to Thomas after the octave, and offers to have him place his hands and fingers in the wounds, declaring to the him, as some translations have it:  Doubt no longer but believe, which in the original Greek is me ginou apistos, alla pistos, which other translations render do not be unbelieving, but believing.

There is no evidence the Apostle actually touches Christ, and really there was no need for him to do so, for faith is a supernatural gift, bestowed on us by God, and not the fruit of some scientific or empirical verification.  Sure enough, such so-called motiva credibilitatis, motives of credibility, as miracles, visions, prophecies, proofs and so on, can lead us to faith, or help bolster our faith, but they cannot be faith itself. (cf., CCC, #156)

Emile Zola, an anti-Christian atheist in France, witnessed a cure of a young woman ravaged by lupus at Lourdes, her face, as he himself described, a suppurating mass of decaying flesh and blood.  When she came out of the spring, the woman was completely cured, a biblical-esque miracle. Yet Zola refused to believe, positing some sort of ‘scientific’ explanation. Even a formerly dead-man walking around with the scars of crucifixion could, in theory, or at least in attempt, be explained away by one of Zola’s a priori disposition, who fill our universities, schools and media.

In the end, faith is not just an intellectual act, but rather a fruit of our relationship with Jesus Christ, the mediator Who brings Man to God.  Our faith in Him and His word should be unfailing, for it relies ultimately not on our power, but the grace of God.  As Blaise Pascal put it: For one with faith, no reasons are necessary, and for one without faith, no reasons will suffice.