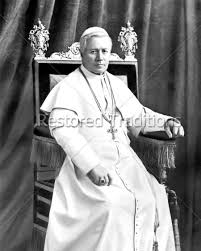 We should pray today to Pope Saint Pius X (1835-1914) for all the woes we are currently facing in the Church. He too was Pope during the first years of a new century, filled with its own travails, not least the rise of modernism in theology, what Pius called the ‘synthesis of all heresies’, undermining the very foundations of the Faith, and which he fought with courage and determination; the aftermath of the revolutions of the preceding centuries, political, religious, cultural, scientific, and all that entailed.

Of humble, hardworking peasant stock, Guiseppe Sarto was clearly gifted: Strong in body, handsome, pleasant, highly intelligent, he from a young age was determined to consecrate these gifts in service to God in the priesthood.

His potential was recognized, and he quickly moved up the hierarchy, vicar-capitular of Treviso in 1878; bishop of Mantua in 1884; cardinal on June 12, 1893, and patriarch of Venice three days later; then, a few weeks after the death of Leo XIII on July 20, 1903, Cardinal Sarto was elected Pope on August 4, 1903 (also the soon-to-be memorial of Saint Jean Vianney, now the patron saint of priests), taking the name Pius in honour of his predecessor, Pio Nono, who had battled the forces of the world, like Pio Decimo would soon do.

His decade-long pontificate was an eventful one, filled with an almost breathtaking level of work and reform. Here are some of the things for which we are in debt to Pius X:

Decrees, not just permitting, but advocating for the daily reception of Holy Communion, and not just for adults, but for children, at the very dawn of reason, as soon as they are able to distinguish the reality of Christ’s Presence, thus removing once and for all the debilitating last vestiges of the rigorism of Jansenism.

The renewal of Gregorian chant and polyphony at Mass, especially with his Tra le sollecitudini and other writings (how much we need beautiful Church music! And how many of our current problems can be traced to a lack of such, I wonder).

Putting paid to modernism, the most slippery and insidious of all heresies, in his encyclical Pascend Dominici Gregis.

A renewal of Thomism, continuing the work of his predecessor Leo, and an emphasis on traditional philosophical and theological studies, especially for priests.

Writing a Catechism, summarizing all of Christian Doctrine.

The promulgation of the 1917 Code of Canon Law, the first such compilation of its kind (before that, Church law was found in a multiplicity of sources, making for all sorts of complications). It is difficult to appreciate how much work this took.

As well, Pius reformed the Roman Curia, and how the Church was and would be governed.

In all, Pius promulgated sixteen encyclicals, along with numerous other decrees, addresses, homilies, speeches, not least on devotion to the Eucharist, to Mary, the saints.

Of course, in the midst of all this, and as a source of his energy, he kept up a strict and unwavering devotional and prayer life, and a number of miracles were attributed to his intercession during his own lifetime.

Pius died on the eve of World War I, some say of a broken heart, as he prophetically saw the horrors the war would unleash, and the tragic aftermath of the dissolution of Europe.

His holiness of life was recognized by all, and he was canonized by Pius XII, on May 29, 1954.

We could use his intercession in these newly troubled, fractious and uncertain times in the Church and the world.