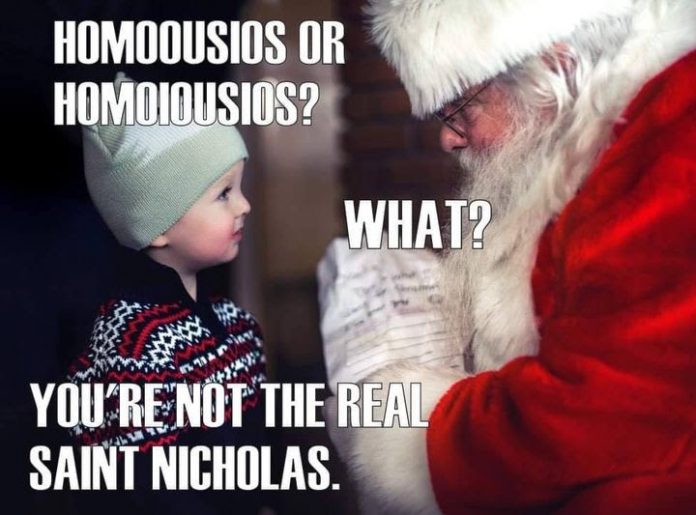 Saint Nicholas of Myra (+343) has gone down in legend in more ways than one. His general story is told in the reflection by John Tuttle, and through the years has developed into the genial ‘Santa Claus’, the rotund, cherubic figure in the red suit a creation of the cartoonist Thomas Nast in Harper’s Weekly in 1881.

The real Nicholas was an erudite and learned bishop, one of the key figures at the first great Ecumenical Council of Nicaea in 325, called by the Emperor Constantine to decide the fate and questions raised by the deacon Arius of Alexandria, who claimed that Christ was not really divine, but rather the greatest of God the Father’s creatures. There was a time when he was not, cried the Arians.

From contemporary accounts  – Eusebius of Caesarea wrote a history – the Council was a fractious one, with stories of Nicholas pulling the beard of Arius in frustration at his contumacious heresy. The watchword proposed by the papal legates was homo-ousios, or, in Latin, consubstantialis, that Christ was indeed the ‘same nature’ as the Father, that is, He was truly God.

Others, the semi-Arians (amongst whom was Eusebius, who ended up baptizing Constantine on his deathbed) sought a compromise: Why don’t we all agree on adding just one iota – the smallest Greek letter – homoi-ousios, meaning that Christ is similar to the Father? Then we could all get along.

It shall not be so, said the orthodox bishops at the Council, Athanasius and Nicholas amongst the foremost, defending the papal position that Christ is God, as held firmly in Scripture and Tradition. And by the grace of the same God, that is what the Council decided, promulgating the Creed that goes by its name, in which we recite every Sunday and Solemnity, that Christ is God from God, Light from Light, true God from true God, begotten, not made, consubstantial (homo-ousios!) with the Father.

For the sake of one iota, indeed.

And Christ – God the Word made flesh – will come again at the end of time in glory, to judge the living and the dead, when we will all find out who has been naught and nice, and who sees us as we are sleeping or awake, and Who will reward those faithful to Him with gifts far beyond our expectations.

Out of the mouth of babes, the precocious and well-catechized child – a plug for homeschooling? – speaks the truth: the chubby man in the red suit, harmless and fun enough, is not the real Saint Nicholas.

So ho-ho-homo-ousios, and a blessed Second Sunday of Advent to one and all!