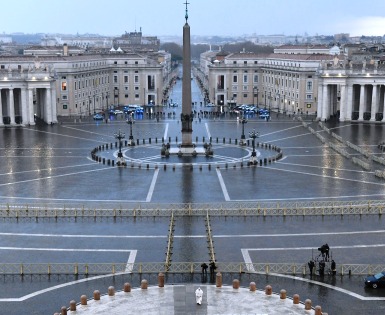 As everyone knows, the word “catholic” means all inclusive. It can be used with no religious connotation, as in “a catholic taste in reading,” referring to someone who will read anything from Shakespeare to the labels on a can of soup. As “Catholics,” therefore, we want to have everything, including whatever is worthwhile in other forms of Christianity, specifically, in Protestantism or in Eastern Orthodoxy. We claim as our own, or—to be ecumenical—we honour whatever is good or true, wherever it may be found. Consider, in this regard, various readings of the episode in today’s Gospel, Peter’s confession of faith—“You are the Christ, the Son of the living God”—and Jesus’s response—“You are Peter[1] and upon this rock I will build my Church.” Two questions may be asked: “How does Peter provide this foundation?” and “How does it continue in the Church today?”

If you were to ask a Protestant these questions, he would reply that the rock on which the Church rests is Peter’s faith and that continues in all true believers:

Let everyone rejoice who can utter the words Peter says out of the same faith: “You are the Christ, the Son of the living God”—out of a faith, I say, that is unfeigned. And let such a person know that he possesses the revelation of the Father from heaven and that he is truly a Christian, blessed and saved from sin, death, and hell.[2]

Thus, it is belief in Jesus that is the means by which each of us, like Peter, is saved: “For God so loved the world that he gave his only Son, so that whoever believes in him should not perish, but have eternal life.”[3] Who could deny it? We are present in this church this morning because we make Peter’s words our own. It is faith that is the foundation of the Church, the rock on which it is built. Peter speaks for each and every one of us.

The “Greek Church,” that is, the Eastern Orthodox, would accept this interpretation of today’s Gospel, but they would add something to it by calling attention to the fact that Peter was an Apostle. An Apostle is not merely a believer; he has a special role to play in the proclamation of the Gospel. There is thus what may be called an official note to Peter’s confession, in that he speaks as the representative of the men whom Jesus charged with the responsibility of proclaiming the good news to every creature under heaven, “to the ends of the earth.”[4] That Peter represents all the Apostles is confirmed by the fact that the power of binding and loosing he was given was also bestowed on the others when the risen Christ “ breathed on them, and said to them, ‘Receive the Holy Spirit. If you forgive the sins of any, they are forgiven; if you retain the sins of any, they are retained.’”[5] It is the role of the bishop in the Church that the Orthodox would add to the Protestant interpretation of the text. The Orthodox insist that one must not downplay any part of Scripture, but interpret as it has been lived in the Church’s tradition. In this case, they draw attention to the special role of the Apostles in the New Testament. As Peter’s faith continues in all believers, so also the special category of “Apostle” must have its counterpart in the Church today as it has had across the centuries. And indeed it does, in the bishops who as baptised share the faith of all Christians and as ordained are the successors of the Apostles.

The bishop is primarily the guardian of the faith and, as such, the centre of the sacramental life of the community.  The Orthodox church maintains the doctrine of apostolic succession—i.e., the idea that the ministry of the bishop must be in direct continuity with that of the Apostles of Jesus.[6]

Hence, like the Protestants, the Orthodox recognize the faith of Peter in every baptized Christian, but they also preserve in their ecclesiology the special place occupied by the Apostles, in that the bishop teaches authoritatively.

What about us Catholics? We too recognize that Peter’s faith continues in every true believer, and that the bishops are the successors of the Apostles. But there is another element of Scripture that had to be incorporated into the structure of the Church, viz., Peter’s special role in the Apostolic college. Time and time again, Peter was singled out as the spokesman of the other Apostles. Today’s Gospel records one such event, but there are others. For instance, it was from Peter’s boat that Jesus preached to the crowd standing on the shore, surely a significant fact. Peter, too, and only Peter, received the command to feed and care for the Lord’s sheep.[7] In the Book of Acts, Peter is the centre and leader of the primitive Church in Jerusalem. Let us apply the principle about the symbiosis of Scripture and Tradition to the figure of Peter. It means that there will be something in the Church corresponding to Peter’s prominence in Scripture. In the history of the Church, there is only one possibility; I am, of course, referring to the papacy. The Pope is a bishop—the Bishop of Rome—and therefore a successor to the Apostles; but as the centre of Christian unity he exercises the special role in the Church of today that Peter had in the primitive Church. Hence, as Catholics we agree with Protestants in glorifying the faith of Peter and with the Orthodox in affirming that bishops have succeeded to the place of the Apostles. But we also invite them to expand their understanding of Scripture by including the charism of leadership exercised by Peter. For, “the office granted individually to Peter, the first among the Apostles, is permanent and is to be transmitted to his successors”: the Popes, as Bishops of Rome.[8]

[6] Encyclopaedia Britannica, s.v. “The Structure of the Church.” Available at https://www.britannica.com/topic/Eastern-Orthodoxy/The-structure-of-the-church; consulted on 19 August 2020.