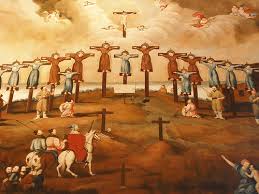 Today is the feast of Saint Paul Miki and Companion martyrs, put to death by crucifixion and impaling on February 5, 1597 at Nagasaki, Japan, amongst the hundreds, if not thousands, who witnessed for the Faith in those tumultuous missionary times; their example offers  a healthy antidote to the rather darker and, to be quite honest, more depressing, meanderings and musings of the sad and tragic apostasy in the Shusaku Endo novel (now film) Silence.

The Franciscan priests, brothers and their lay associates  were forced to march 600 miles over 30 days to the site of their martyrdom – each one hoisted upon a cross, in imitation of their Lord and Master. The Office of Readings is a powerful contemporary testimony to the glorious martyrdom, as the  prayed, sang and forgave their executioners as they hung there, dying, in that Christian paradox of joy and suffering, or, rather, joy in suffering. Father Paul Miki preached his last sermon from his cross, saying:

The martyrs were beatified on the feast of the Triumph of the Cross, September 14, 1627 by Pope Urban VIII, and canonized by Blessed Pius IX on June 8, 1862. They would be followed by hundreds, if not thousands, of others who witnessed for the Faith in those pagan lands, where Christ and His salvific truth are still so needed.

In a providential connection the depths of which only the good God knows, Nagasaki, the most Christian region in Japan, was also chosen (as a secondary target) for the dropping of the second atomic bomb on Japan in August of 1945 – killing nearly 100,000 – men, women and children – people instantly. Peruse my own thoughts on the evil of this action here and here. As the Second Vatican Council in the Pastoral Constitution of the Church, was to declare:

Any act of war aimed indiscriminately at the destruction of entire cities of extensive areas along with their population is a crime against God and man himself. It merits unequivocal and unhesitating condemnation.

Curiously, or miraculously, as one’s a priori suppositions lean, the eight Jesuits stationed there, although only eight blocks from ground zero, not only survived the blast, but received no ill-effects of the radiation and lived to a ripe old age, as religious often do.  The same goes for the Franciscan house nearby the Jesuits.  As mentioned, wonders really do never cease, and there are no accidents in God’s providential design.

May the martyrs pray for us, and that all may be open to the Truth.