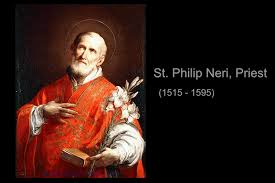 Today, May 26th, is the feast of one of my favorite saints, Philip Neri (1515-1595), born and raised in the renaissance city of Florence during the height of that glorious era, one which, for all its artistic and scientific accomplishments, or perhaps because of them, was losing the sense of God. As a charismatic, talented, attractive, noble and virtuous young man, Philip could really have been anything, but his heart, in a very real and literal sense, was fixed on God and God alone.  I mean ‘real and literal’ since he was so inflamed with the ‘fire of divine love’, as the Psalms say, that people could often feel his heart beating from across the room, and when an autopsy was performed at the end of his life, his heart was found to be so enlarged that it had expanded his ribs, yet with no ill-effects.

Philip, who at first wanted to go to the mission in the far-off Indies, instead made his way to Rome, still in early adulthood, and began tutoring, visiting the sick, praying, while evangelizing (we had best avoid proselytizing) the young men, urging them to join him in prayer and good works. At his spiritual director’s request, even urging, Philip took Holy Orders, became a priest, and soon men were flocking to him for confession, advice.  Eventually, a sort of community life developed around the saint, so he began what came to be known simply as ‘The Oratory’, a place of prayer, sacraments and preaching the word of God, the three pillars or foundations of Oratorian life.  A rule was drawn up, but without vows, something upon which Father Philip was firm:  The only bond an Oratorian would have to the way of life would be the ‘vinculum caritatis‘, the chain of charity, which would hold him to remain with his brethren, hopefully, in the normal order of things, for life.

The Oratory was one of the primary forces in evangelizing Rome in the 16th century, keeping the eternal city and the centre of Christendom at least in essence on the path of truth and holiness. Saint Philip was the director and adviser of Popes and potentates, but always in a hidden way.  His motto for the Oratory was ‘amare nesciri‘, love to be unknown (which, in my own time at the Oratory, seminarians would modify to ‘amare nescire‘, love not to know…). Father Philip was a mystic, steeped in prayer; his Masses could last hours (the server would close the door and come back and check on him).  He could read hearts and souls, and converted untold thousands during his long life. He was always cheerful, and wanted his own sons to be so: I will have no sad saints, he was wont to repeat.  Joy, even in the midst of suffering, is a hallmark of holiness and the Christian life. We could do with much more of that spirit of joy, delight in the simple things, gratitude to God, in our sad and tired and grey world.

One of the more famous Oratorians, who is known, was Bd. John Henry Cardinal Newman, who helped evangelize England in the 19th century, and whose profound and beautiful writings and sermons still move many.  There is an interesting article on their spiritual kinship this morning in Crisis magazine by Michael de Sapio, and I will leave you with a brief quotation which sums up Saint Philip’s apostolic work:

As a young priest Philip saw the fascination that the arts and sciences had on contemporary minds. Perceiving that the Renaissance was there to stay, he sought to channel it to Christian ends. This he did by founding the Congregation of the Oratory, a community of secular priests that held regular services of prayer, sermons, and religious music for the people. Philip drew upon a wealth of culture for the Oratory meetings. Members of the papal chapel choir were brought in to sing the polyphonic compositions of Palestrina, and popular laudi (songs of praise) were written expressly for use in the Oratory; the musical genre of the oratorio can be traced directly to the religious dialogues-in-music performed here. Just like the Renaissance painters, Philip took advantage of the beauty of nature: his outdoor pilgrimages to Rome’s Seven Basilicas drew crowds of people to relive the immediacy of faith of the early Christians, who worshiped in house churches, catacombs, and en plein air.