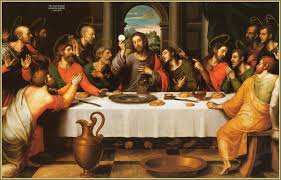 Simple facts can often be significant . . . and often unadverted to. Consider the Last Supper. Obviously, the Apostles had to be present in order to participate in it. Wonderful as it was, it would have been of no benefit to Peter if he had decided not to attend. And yet, this trivial observation takes us into the heart of our faith, viz., that Jesus—who, as the Son of God, is omnipresent—was located at a given place, at a given time. That’s what we mean when we say that the eternal Word of God became man, was incarnate, in the flesh, in the here and now.

The implications of this fact are important. For one thing, it means that two thousand years ago in Palestine to encounter God in Christ you had to go where he could be found; for he was here and not there, today and not yesterday or tomorrow. People recognized and acted on this knowledge. Recall the paralytic lowered through the roof when the house was too full to permit access to Jesus through the door; or the crowds that followed him into the desert; or Zacchaeus in his sycamore tree; or the woman who came to anoint Jesus in the house of Simon the Pharisee.

A second implication of the physical presence of God in the man Jesus is this: that Jesus rose from the dead in that self-same body. In other words, in the risen Christ God is still located physically. The holy women encountered him at the tomb, and the two disciples on the road to Emmaus. Thomas touched his wounds in the upper room, and Jesus fed the Apostles on the shore of the Lake of Galilee.

There’s a third implication: the same holds true today. If we wish to have contact with Jesus we must go where he is to be found; we must see and hear him and touch his body. But where, one asks, is he now localized? There are millions of believers around the world. How can each one be expected to encounter Jesus in the here and now? Well, he explains it himself. “Take and eat; this is my body. Take and drink; this is my blood.” He is present on the altar under the species of bread and wine. That’s why we attend Mass; he’s there, and we simply have to be where he is. And thus, the doctrine of what we call “the Real Presence” is the inevitable consequence of the Incarnation itself.

Christ also speaks in the words of Scripture when they are solemnly proclaimed at Mass, and he is present in the assembly, for as Saint Paul tells us, the Church is the Body of Christ. The priest, too, represents Christ, the bridegroom, presiding at the wedding feast of the Lamb. For Jesus is present as concretely and as really as he was during his earthly life, and it would be a foolish for me to stay away as it would have been to remain in the house when news came that Jesus was in town that day, preaching and working wonders.

A final implication of the Incarnation would require a book to elaborate, for it is the entire sacramental system. As man’s salvation was accomplished in the words and deeds of Jesus, so too does the Church continue his great work by rites in which pray and gesture convey to the faithful member the graces peculiar to each sacrament. In Jesus, God has given us a pattern that shows how he interacts with the human family. How consoling it is to find in the Church the same union of word and act.