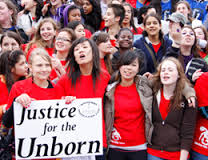 Today, the feast of Saint Matthias, paradoxically marks the sombre anniversary of the legalization of abortion in Canada, under Trudeau Sr., in 1969.  Omnibus Bill C-150, officially the Criminal Law Amendment Act , also brought into law gun control, contraception, homosexuality, drunk driving (with the 0.08 level), gambling and cruelty to animals.  I find it curious that as we allowed the murder of the unborn in the womb, we began the process of an increasingly mawkish sentimentality towards animals.

Of course, as will happen with euthanasia, so happened with abortion:  The initial ‘safeguards’, the required permission of a ‘therapeutic abortion committee’, with two physicians, only in extreme cases endangering the life or health of the mother, and so on, were whittled away.  Ever since 1988, when the whole abortion law was struck down, Canada has had abortion-on-demand, for any reason whatsoever (one is not even permitted to ask anymore, as the gender-selective abortion debate makes clear), all through nine months of pregnancy, right up until the baby sees the light of day.

Trudeau Jr. is all over this, and is vehement in his desire to protect a woman’s ‘right to choose’.  He is a product of our modern education system, his own dysfunctional family, the culture in which he was raised, and the narrow, restricted world-view he absorbed in the upper-crust Montreal in which he was raised, getting more or less whatever he wanted, the spoiled scion of a distant, older father and his bewildered mother, who divorced when he was but a child.  How much can one blame him?  I heard recently that our tattooed, pot-smoking Prime Minister no longer even considers himself a Catholic.  Of course this is bad, but at least it may decrease the charge of hypocrisy, not least if he makes this, if true, more widely and clearly known.  But, ‘good’ politician that he is, he may want to ride the Catholic coattails, and the votes that go along with at least paper membership in the Church.

Each year I and many others go to march in Ottawa for life, a symbolic gesture, largely ignored in the media.  Numbers always vary somewhat year by year; some say 22,000, others a few thousand.  I personally thought they were down a bit, but I am not much into statistics.  Even if five good families showed up, it would still signify that someone, somewhere is resisting the culture of death making its inroads  into the hearts and minds of our nation.  This year, the police significantly shortened the proposed march, since there were a number of violent protesters blocking the way.  I am not sure why they were not arrested; if it were we pro-lifers blocking a ‘gay’ march celebrating the unsung joys of sodomy, I think a lot of us would have ended up in jail.

I say the march is symbolic, since our (that is, those of the culture of life) influence in ‘the world’ is minimal, and we (or at least I) go to the March not so much to influence politicians and pundits, but to pray and meet other like-minded people.  The agents of death, and I include not just the pro-abortion-pro-euthanasia zealots, but also all those who support deviant sexuality, unchastity, fornication, pornography, prostitution, all the ‘crimes against life’, they, the agents of death, have near-complete control of our schools, elementary and high school, universities, colleges, media, film, newspapers.  The whole zeitgeist is on the side of the leering grim reaper.  No wonder they ignore us, and why fewer and fewer young people attend and make a stand for life.  We are, in the world’s eyes, like hobbits must have seemed to the eye of Sauron:  Insignificant little creatures, primed for destruction, to be cast aside by the inevitable spirit of progress.

Yet like the under-sized Israelites when they first reconnoitred the Holy Land which had been promised to them, who seemed ‘like grasshoppers’ compared to the gigantic Canaanites who dwelt there, or the runt-ish David with the ruddy cheeks against the hulking Goliath, or Gideon’s little band against the thousand trained Midianite warriors, the victory is ours, for God is on our side, and the battle is the Lord’s, who laughs his opponents to scorn.

Of course, for a time it may not seem so; God works on His own timetable, not least to give these same opponents time to change their minds and repent.  The choice to witness for Christ like Matthias, or to ‘go to our own place’, like Judas, stands before each one of us.  Both of these Apostles were ‘chosen’, but only one (to our eyes) responded to the path of love, of agape, of hope, that God offered him.

On the very eve of the March for Life, Trudeau signed back into law Canada’s funding for abortion overseas, which had been removed by Harper, to give him his due.  Alas, at least as things now stand, Trudeau and his not-so-merry band of Liberals have chosen the losing side, regardless of their ‘majority’.  They just don’t know it yet, and we should hope and pray they do before it is too late.