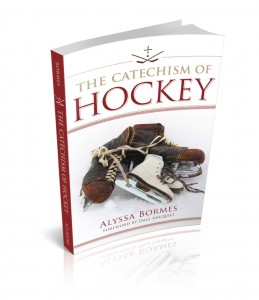 Alyssa Bormes compares the catechism of hockey to the Catechism of the Catholic Church. The Catechism of Hockey opens with the description of a young boy, alone on the ice, playing hockey with a crushed soda can and two twigs frozen into the ice for goal posts. This boy, Alyssa Bormes claims, is the embodiment of hockey itself. This crude form of the sport is what she calls hockey’s “deposit of faith.” The rules of hockey follow necessarily from it and are needed to preserve the deposit of faith of hockey. Bormes compares hockey to the Catholic Faith. She says that the understanding the rules of hockey can shed light on understanding the Faith.

Bormes traces how we first learn the game as children. The game is stripped down to its most basic elements: a stick and a tin can on a patch of ice—and from this early introduction a love of the game develops. Once introduced, there grows a desire to advance in the skills, to practice and play, and learn the rules. Nobody who loves hockey wants to get rid of any aspect of the rules, for without the rules, there would not be a game. But love of the game comes first, and it is a personal love.

This is what Pope Francis is doing. This is his approach to catechising. He is not dismissing the rules, as he has made clear. But he is telling us that we need to first introduce Christ to others before they can learn to love the rules as a way to get closer to Christ. Once one falls in love with Christ, one will want to learn how to deepen this relationship: that is, learn the rules of this new relationship, the rules taught by the Church.

I strongly recommend this book. It is deceptively simple in its presentation, but there are insights between its pages. It is more than just an allegory; it is a profound exposition of the Catholic mind. I came away from this book with a better understanding of our Faith—to me that is the test of a good book.

Here is what I would like to see happen. It would be wonderful if every child between the age of eight and eighteen could be given this book to read as part of his or her religion course. I cannot think of another book that contains more hope for good in explaining the freedom that comes from living the faith.

“There is a wonderful paradox in teaching your children to submit to the teachings of the Church. They will experience a wild freedom, and they will flourish because of the Commandments, not in spite of them” (p. 99).