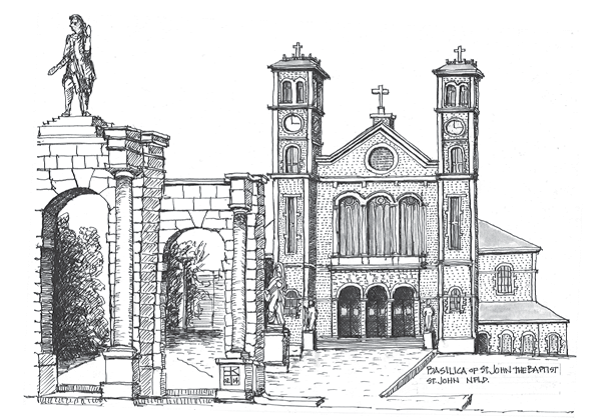 Anyone who, like me, was moved by this perception [of the need for renewal] at the time of the Liturgical Movement on the eve of the Second Vatican Council can only stand, deeply sorrowing, before the very ruins of the very things they were concerned for. – Cardinal Ratzinger

Tough words, these. Recently, some friends of ours were on pilgrimage in Bavaria, the heartland of Catholic Germany and homeland of Ratzinger and his seminary. The pictures they brought home tell all. One is of the interior of St. Mary’s Cathedral. Featured is its Baroque sanctuary which dazzles the eye even as it lifts the spirit. St. Mary’s was the site of Ratzinger’s ordination and shares a courtyard with his seminary. The other image is, well—I wish I understood Photoshop. It is not a superimposed backdrop from our local high school’s production of Alfred Hitchcock’s Psycho. It’s merely the seminary’s 1960s reno. One seminary, two chapels: same faith? What kind of soul could have authorized such a construction?

From the most bizarre liturgical experiments, bishops have largely moved on. For better or for worse, our buildings don’t. We fashion them, then they form us. The same iconoclastic spirit which stripped liturgies of mystery made a mess of our churches. That is a tragedy. A church is, we might say, a catechesis in stone. It is a book everyone can read. For two generations we’ve sent our kids into the world culturally illiterate. Sure, they know how to text. And yet, too many are ignorant of the Word. I don’t just mean the details of how David nailed Goliath. They are starving to learn again how that Word has been made flesh, incarnate in time, through culture, by symbols, within tradition. Over the next months this spot will be devoted to helping us recover the Catholic sense of how to build with beauty.

A few weeks back David Beresford approached me with the marvelous idea of adding an architectural page to the already stellar line-up of regular Catholic Insight features. I’m honoured to start it off. Many happy visits!