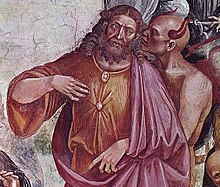 What form will the antichrist take? Our Catholic tradition holds that he will be man, filled with evil, under a hypocritical façade of goodness, which will deceive many, but only because they want to be deceived. Beneath that veneer, he will hate Christ, His Church, all He stands for, and, yes, all of us Catholics, persecuting and putting to death all whom he finds following the ‘Way’. There will also be a spirit that accompanies this ‘man of iniquity’, as Saint Paul so styles him, what the Catechism calls a ‘secular messianism’. The antichrist will deny that Christ came in the flesh, and will instead preach a salvation within the confines of this world alone. He will promise a heaven on earth which, like all false utopias, ends up a hell instead. Striving only for an earthly happiness leads to misery, and of an eternal sort.

The specifics of all the antichrist’s brief reign – times, dates, persons, means – are hidden from us, even if some signs are given in both public and private revelation, which will allow us to prepare our minds and hearts. I was struck the other day, when a priest friend in an article admitted that ‘he does not think apocalyptically’, which I found an odd thing for a Catholic to say, especially a priest. I can see what he may have meant – not looking for little antichrists and dire omens under every pillow and bushel basket.

But we are meant to think, and live, apocalyptically, always ready, loins girded, awake and sober, watching the signs of the times, so what we are not deceived. For the temptation, and the coercion, will begin subtly, and ramp up gradually, then, to paraphrase Hemingway, suddenly.

But to those who remain steadfast and firm in the Truth, with eyes to see and ears to hear, God will give the grace and strength to persevere unto the end.

On the note of signs, here is one, from the odd and disconcerting mind of Yuval Noah Harari, who has the name some dystopic author might give to an antichrist character. I’ll leave the reader to decide why he touts his own homosexuality as an example of an inexorable algorithm, from which is not free to escape. Nor, he claims, are others, and the ‘algorithm’ knows all, and we are fated to its will, or, perhaps, its code.

Harari’s prognostications are half-truths, as is the wont of the deceiver. The powers-that-be will indeed try to ‘hack humans’ – an evocative phrase – and to predict, as well as control, our behaviour, such that we are scarcely aware they’re doing so. Such signs are already in the mass delusions around us.

But take hope, for contrary to Harari’s condescending claims, organisms are not algorithms, least of all humans, persons, composed of body and soul, made in God’s very image. We scarcely are even beginning to know how genes work. As Saint Thomas puts it, we will never fully understand even the nature of a housefly. Reality is infinitely complex, bursting forth into the transcendent, and escapes the ultimate dominion of Man, or devil.

Still, we must resist the attempt to reduce us to an ‘algorithm’, fated to do the will of the evil one. Harari warns you won’t be able to hide, but Scripture says otherwise.

Deliver me, O LORD, from my enemies! I have fled to thee for refuge!
Teach me to do thy will, for thou art my God! Let thy good spirit lead me on a level path!

Amazon, Alibaba, secret police? What are they against Truth and Omnipotence Himself?

'You Will Not Be Able to Hide': Algorithms Will Understand You Better Than You Know Yourself

Yuval Noah Harari: "Even if you walk away, and even if you keep hiding from your classmates or from yourself, you will not be able to hide from Amazon and Alibaba and the secret police." pic.twitter.com/2CvZxt31Gy