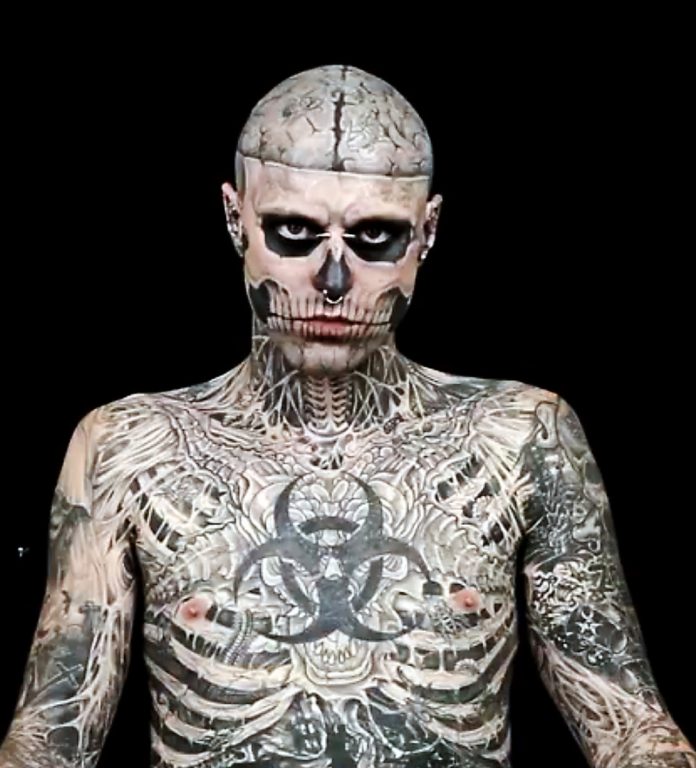 An interesting factoid I recently came across, one borne out by anecdotal evidence, is that 3 out of 10 Americans now have tattoos, and I presume that number to be at least as high in Canada, signifying widespread acceptance of a practice that was once relegated to 19th century British sailors, who in turn adopted it from Polynesian South Pacific Islanders. Eventually, tattooing spread through the ranks of the military, biker and other types of gangs, mobsters, Russian and otherwise, and, now, quite literally, everybody and their granny is getting their body stamped with permanent images, fair or foul. And not just one: Once begun, tattooing seems addictive, with people getting their arms, torsos, face, neck, back and wherever else, coloured and etched.

Ponder Rick Genest’s body, if you will, which is mostly covered in permanent ink drawings, embedded in the lower layers of his dermis.  Mr. Genest has parlayed his tattoo-ness, mysteriously, into some kind of successful renown; his fifteen minutes of fame derive largely from his appearance in a 2011 Lady Gaga video.

Although on the extreme end of the spectrum, Genest signifies the now fashionable trend, and with the current cachet that such body-art-work offers, students every year ask me whether they are good or evil, prudent or dumb.  What is wrong with a small cross on one’s arm, depicting one’s adherence to the Faith?  Or the name of one’s wife?  Or a picture of Our Lady?  Debates swirl into the wee hours of the morning, emotions are engaged, and the stakes are drawn…

The question of tattoos is not easy to answer, but answer it one must.  I will lay down my own response quite clearly, that tattoos are a form of mutilation of the body, and hence violate the fifth commandment.  Ponder: Would you be angry if someone tattooed you while you were asleep? (presuming such is possible…perhaps while anesthetized).  How many people regret their tattoos?  On tattoo parlours (why a ‘parlour’?) one usually sees a sign also for ‘tattoo removal‘, a difficult, expensive and more painful procedure than getting the tattoo in the first place.  I always wonder whether such ‘parlours’ make more money putting them on, or taking them off (I doubt they would want this statistic publicized).  At the very least, the number of advertisements for tattoo removal signifies some level of deep and widespread regret.  How many brides want a tattoo showing against their wedding dress?

People reply that for mutilation to be mutilation, it has to result in the loss or diminution of the proper function of some part of the body.  Tattoos, they argue, do not diminish the skin’s physiological capacity (e.g., as a barrier to infection, as a transfer membrane for heat and moisture and so on). Hence, mutilation, they are not.

Well,  I might retort that tattoos can indeed lead to infection and long-term problems.  The ink injected into your skin may be the same as that in your pen or office printer, and the water used to dilute the ink for ‘shading’ may be improperly sterilized and filled with germs such as myobacterium.  But, let us presume professional tattoos are by and large medically benign.  Our skin, however, is not just for physiological purposes.  Rather, our flesh signifies in large part who we are.  It is what people ‘see’ of us, that aspect of our being that is presented to the world, at least our faces, our hands and limbs, and other parts in more intimate settings.  The skin is sacramental, the most visible part of the imago Dei that is our body and soul composite.

Of course, our bodies are always changing, either with our own efforts, or by nature.  Tattoos, however, differ from haircuts and developing our bodies through exercise and such, by which we are actualizing an inherent potency in the body, perfecting it according to its natural capacity.  There is no such ‘potency’ in the skin for an ink drawing, which must be artificially embedded in the deep layers of the dermis via needles, cutting and blood (hence, back to infections).

There is a limit to how much we can modify our bodies (see the tragedy that is Bruce ‘Caitlin’ Jenner).  Our bodies, our ‘flesh’, are sacred, with a deep spiritual and human significance. Should we try to ‘improve’ upon this beautiful exterior, given to us by God?  Is our skin a canvas upon which we (or more properly others) can etch and carve permanent drawings?

I would argue a most definite ‘no’. My own reaction to tattoos is some degree of revulsion, or at least pity for the person so scarred (and medically, scars they are).  Regardless of the superficial ‘beauty’ of a tattoo, the tattoo, permanent and unalterable, does not belong on (or in) human skin.  We should ponder that most are not beautiful…I once saw a man at a beach with Jack Nicholson’s face on his shoulder in its ‘Heeer’es Johnny‘ grimace from that strange movie The Shining. When I tried to find a copy on-line, I found with amazement that this tattoo is actually popular.  Are people as insane as Jack in the movie?

Whether a Jack-o or a Rembrandt, art belongs on non-human and non-living material.  Would you put a ‘tattoo’ on the Mona Lisa?  How much more sacred and inviolable is the human body!  The skin was not created as a canvas upon which to draw, for the body is God’s work of art.  Let us leave it as it is, beautiful and pristine, and prepared for the resurrection, where, regardless of the natural blemishes we may develop in this vale of tears, we will then appear with our integral bodies ‘without spot or wrinkle’, shining with the glory of God.