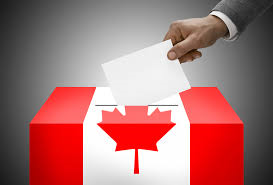 A blessed and glorious Sunday to all our readers…

Today’s Gospel speaks of Christ’s ‘elect’ – that is, His chosen, which in the end means those who choose Him and His truth – whose prayers and cries He will most certainly hear, in the time when His answer will be of most effect. Hence, the exhortation to pray and not lose heart. Yet, when He returns, will He find faith upon the earth? That may have raised questions in the mind of the mediaevals, when faith was more or less universal upon the earth as then known, but we now know that faith can be gained, and lost, accepted, and rejected. I hope to write more on this soon, offering a Thomistic take on what we as Catholics mean by ‘faith’, and why so many may be losing it.

And, speaking of losing it, it is our own election day tomorrow in this fair Dominion. The choices are grim, but we are called to cast our ballot at the very least for the one who will do the least harm, and perhaps some little good, whether by omission or commission. Politics is more or less a mug’s game, especially when it becomes a profession unto itself, with those seeking to rule, for ruling’s sake.

We are, in the end, governed far more by our culture, which is really the manifestation of our ‘religion’, which in turn are those things – or that one thing – that is, as Thomas puts it, ‘master of our affections’. And all too many of us are ruled by forces we understand not, our passions and our erroneous opinions, foisted upon us by years of socialist, public education, but then also by far more sinister powers behind these, which bring darkness upon the land, and our minds and souls.

On that note, as you prepare to vote, perhaps peruse these words on the late and not-so-great Pierre Elliot Trudeau, who did more than most to shape – and deform – Canada into what it now is, a bankrupt, socialist regime run by an immature, self-satisfied dauphin who, we may only hope, is so unreflective and unaware that he knows not what he doth. Ponder his legacy: The legalization of the murder-suicide of the elderly, sick and depressed under the euphemism of ‘euthanasia’; the legalization of mind-and-soul numbing marijuana; the entrenching of the right to murder the unborn, and squashing of any conscientious objection thereto; the expansion of ‘transgender’ rights; untrammelled immigration, without much thought of the long-term consequences; and an unrealistic ‘green’ policy that has already led much of the way to Alberta’s – and, hence, Canada’s – impoverishment, even financial ruin and collapse. The examined life seems not to be his.

But it should be ours. So pray, and don’t lose heart. Whatever happens, for those with faith, our redemption is always near at hand.