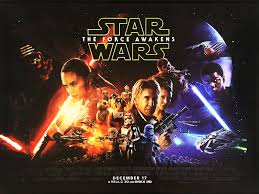 I thought the Star Wars franchise, so successful and cinema-transforming in the late seventies and early eighties, was ruined by the three prequels in the early years of this millennium, all of which were phenomenally bad, the last one on a galactic scale.  The blond Canadian Anakin deserved an anti-Oscar for his thespian ineptitude. I had hoped it was all over after this cinematic disaster Lucas foisted upon an unsuspecting and hope-dashed generation of movie-goers.

But they made a whackload of money, so here we go have yet another instalment.  I, against my better judgement, recently watched the sequel, ‘The Force Awakens’. I must confess to being a bit of a sci-fi fan, which may or may not be a weakness, and in fact enjoy the occasional film of any genre, but I usually watch what few I do alone, so I can turn them off with ease, something that happens more often than not.

Alas, this time, I had guests over, so had to sit through this whole thing, which seemed to last a lot longer than the rotation of a galaxy.

Now, I have seen a lot of bad movies in my decades on planet Earth, some of which I truly regret, but this, this is bad in a way that I have trouble putting into words.  Having said that, allow me to try, at least to expunge the memory of this inanity in my own scorched memory.

Well, we might as well start with the Force. In the plot that was the sub-creation of Star Wars, the Force, although ‘all around us’, only the Jedi could control and channel, utilizing this power for the good (the light side) or for evil (the dark side). But this control took years of training, discipline (even the much-denigrated celibacy) and effort, signified so clearly with Luke under the unrelenting tutelage of Yoda. Whatever one’s memories of this now much-parodied scene, we know that Luke, even after some degree of proficiency, was no match for Darth Vader, who toyed with him in the famous light-sabre battle on the Cloud City, trying to coax him to the dark side, after he sliced off Luke’s sabre-wielding hand.

Yet, here is the young Rey, played by Daisy Ridley, who does what appears to be her best. Part of the problem is that she bears an uncanny resemblance to another ubiquitous English actress, Keira Knightley, with the same smile with lots of teeth and porcelain features (stick with what works, I suppose). I half-expected Mr. D’Arcy to show up. Her ‘acting’ consists in widening her eyes at significant moments. I know she is limited by the one-dimensional plot and laughable dialogue, but poor Daisy comes across like a light-sabre-wielding drama queen.

But back to the Force: Rey, without any training at all, becomes a Jedi expert, defeating a Sith lord just by repeating the word ‘force’, softly but with meaning, like little Dorothy whispering ‘there’s no place like home’, and tapping her shiny red shoes three times. Just believe in yourself, like the Kung-Fu panda! Such is the post-millennial socialist generation: no work, but all the benefits.

Need I repeat that this destroys any sense of drama or tension or even identification with the character, besides its being entirely inconsistent with the whole Star Wars universe? What the heck is a Jedi, and why was Luke training them, and why did he himself have to train to become one?

I suppose Rey’s instant expertise is part of the blunt feminism and anti-masculinity which does not just run through this film, but seems almost to be its raison-d’etre. It is not as though the untrained-scavenger Rey can do anything the men can do, and better; she seems able to do anything that can be done, without effort, without discipline, with just her feminine intuition and atta-girl attitude.

Fly the two-pilot Millennium Falcon like an experienced ace through the most technical maneuvers without any apparent opportunity to fly anything before? No problem.

Defeat two aliens trying to steal her droid with the now ubiquitous and invincible feminine ‘martial arts’? With ease.

Use Jedi mind-control just by repeating a mantra? Hey, who needs Ben-Kenobi?

Find the electrical thingy that saves the ship, or the technical solution to get them out of any situation? You bet, and even the grizzled Han Solo is impressed.

But Solo is not so impressed with the hapless converted Stormtrooper, ‘Finn’, who does his best innocuous beta-male to Rey’s uber-alpha female.  The poor hapless Finn is rescued from imminent death more than once by the ever-competent Rey. He is the flip-side of the fainting female, and their romantic chemistry, if that is what they were going for, non-existent. If Rey were an English white male, all Hollywood would be crying ‘racism’ at this second-fiddle black guy. But here, I guess, feminism trumps racism.

Don’t get me wrong: I do not mind women finding their place, and rising up from their roles as waiting-to-be-rescued eye candy, screaming on cue. But, this, this is a parody of all that women deserve, and just plain boring.

And speaking of parodies, what is with bringing the aged Harrison Ford and Carrie Fisher into this embarrassing mess? Why not leave them safely ensconced in our memories in a galaxy far away and long time ago? They both show up long enough to earn a Jupiter-sized paycheque and whatever slice of the take they could bargain.  Ford recites his stale Solo-esque lines, as he sleepwalks through this barely-veiled remake of his very first Star Wars in 1977: The same desert planet, the same orphaned potential Jedi, the same annoying droid (now spherical, instead of ellliptical-rhomboid) the same Death Star, only A LOT BIGGER, the same evil, angry Sith Lord with a mask (only now he is Solo and Leah’s wayward son, instead of Leah’s wayward Dad), the same ‘Empire’, now renamed the ‘First Order’ (with over-the-top Nazi analogies, replete with a ridiculous, spittle-inducing Hitler-esque speech in front of legions of, yes, ‘stormtroopers’), the same death ray destroying not just one planet, but FIVE (or so), the same final assault on the one vulnerable shaft in said Death Star, by the same X-wing flying Republic pilots, led now by Poe Dameron, Oscar Isaac, who does what he can to be the new cocky Solo, but without the charisma.  The whole flat conclusion is foreordained from light years away. Ho, ho hum…ho, ho, hum, ho, ho, hum.

The whole Dark Side thing is so brutal, dark and lonely, one wonders why anyone would be attracted to it. All the good-looking girls (indeed, all the girls), the music and the parties are on the light side, and the dark side is not even powerful: The bad guy, the aforementioned ‘Ren’ from Han and Leah’s union, which apparently lasted at least long enough to produce an offspring (unlike most Hollywood romances) is supposed to be powerful enough in the ‘Force’ to defeat even the great Luke Skywalker’s attempt to train a whole new legion of Jedis. Did he kill them all? Did he defeat Luke? Why is Luke so desperately needed? Why can’t some Jedi just mind-message him? The lazy plot does not bother asking these questions, never mind answering them.

But here is Ren, who bears a passing resemblance to Justin Trudeau, at least his his flowing brunette locks do, with a little tinge of Oscar Wilde (but without Wilde’s wit). As one fellow viewer mentioned to me, he should have kept his mask on.  As I was saying, here is Ren getting his Jedi-butt kicked by the total-non-Jedi beta-male Finn, who has never held a light-sabre before. Why, in the name of the myriad of muses weeping over this slapdash rubbish, would Rey want to be trained by this dweeb, and join his pathetic dark side?

Is it just me, or is this whole thing is just a few micro-milli-parsecs away from a total Saturday Night Live parody, with comical dialogue and fake, deliberate, and over-wrought scenes? It would have been better if director J.J. Abrams had gone whole hog to comedy; at least then we could have laughed in earnest.

Even the sets are cheap, with the look of something out of Star Trek: New Generation, limited, apparently by a TV-sized budget (to maximize profits?). The bar scene, the killing of the villagers, the victory after the Death Star, name your vignette, they all look like the producers grabbed a few people off the street and dressed them up in left-over costumes from the last time this series was resurrected, and told them to prance around.

What troubles me most is not that this is a crappy movie, of which there are too many to count, but that it made over 2 billion dollars, and that means a lot of really bad Star Wars offsprings are in the offing. Yes, dear reader, in case your eyes glazed over like Ridley’s in her oh-so-emotional scenes, that is two thousand million, or about one dollar for every second the camera lingers on her Knightley-esque face, enough bills to pave a path to Mars, enough even to fund the Rio Olympics, one may think, which might help save Brazil from financial ruin. At least one finds some drama in sports.

A final note: As I ruminated over writing this review, the CBC providentially had a lunchtime discussion on whether superheroes are destroying the originality and quality of Hollywood. That is not the central point, for the deeper problem is that people are paying a lot of money for spectacle over substance (to which superhero films are more prone, I suppose), a grievous sign of the diminution, I would say regression, of our culture.  We are losing, or have lost, our collective imagination, our capacity to think logically, to follow plot and dialogue, to ponder the deeper realities of life and eternity. Movies now are like watching someone else play a video game, and the gaming market makes a lot more money than films. So why would not Hollywood follow the dollar signs, and mimic what the people want?

There is more to be said here, but for now, let it stand that Star Wars, and the myriad of films like it, are a symptom of what we have become.

One good thing is that films like this prompt me to read more books, and to watch what movies I might, you guessed it, Solo.