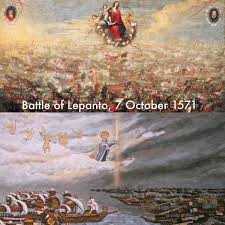 Today is the memorial of  Our Lady of the Most Holy Rosary, a feast instituted by Pope Saint Pius V in commemoration of the great, and miraculous, victory at Lepanto on October 7th in 1571, when the Christian fleet led by Don Juan of Austria crushed the invading, and seemingly invincible, navy of the Ottoman Turks, who had turned the Mediterranean into an Islamic lake. They had never been defeated, and the last stronghold, the fortified town of Famagusta on Cyprus, fell in 1571. Lala Kara Mustapha Pasha had promised safe surrender for the inhabitants, then reneged on his word – after all, he saw Christians as the infidel, to whom one could lie – murdering or enslaving all left within. The leader, Marcantonio Bragadin, was tortured, his ears and nose cut off and left to foster, beaten, paraded through the streets, flayed alive, and his stuffed body used as a trophy for Pasha’s ship. The cathedral of Saints Peter and Paul in Famagusta is now a mosque dedicated to Mustapha.

The sultan had promised to do the same with Saint Peter’s itself, first using it as a stable, as Islam had desecrated the great cathedral of Hagia Sophia after the defeat of Constantinople a century before. The Pope, Pius V, asked Christians to offer penance, and pray the Rosary beseeching Our Lady, as he himself led a procession through Rome, that God through His mother would send what aid He willed.

Sure enough, the winds, the waves, the very battle itself went the side of truth and goodness; had gone the other way, Europe would be a very different, and very diminished, place today. Indeed, a vast spiritual desert:  No music, no Mozart or Bach or Palestrina, no universities to speak of, at least in any Catholic sense; no deep red vino, whether Italian or French; no monasteries, their prayer and their beer but dim memoires, almost no freedom of thought or expression. And the legitimate aspirations of women?  In a word, no Catholicism, which means a vitiation of truth and freedom, subjugation and submission for all, but especially for the fairer sex.

And peruse the stirring words of Sean Fitzpatrick, the call for a new chivalry, like Don Juan of old, to arms – spiritual, and otherwise as circumstances demand – to defend all that is true, good and beautiful

Many Popes have urged the daily recitation of the Rosary since Pius V, not least the saintly John Paul II, who in 2003 dedicated one of his last encyclicals, Rosarium Virginis Mariae, to this ancient prayer to the Virgin, also giving us the Luminous mysteries to guide us in these dark times, which John Paul likely foresaw in some way.

The Rosary which saved Europe in the time of Pius V, had its origins in the battles of Saint Dominic against the intellectual and spiritual evil of the Albigensians in the 12th century inheritors of the much-earlier Manichean heresy, that all matter was evil, including bodies, marriage and children.  As one priest recently put it, the very words of the Ave Maria put paid to this demonic lie:  And blessed is the fruit of thy womb.  God Himself took a body, sanctifying our very flesh by His Incarnation, declaring all ‘incarnations’ – all babies, children, families, human love – good and holy, and that this flesh, now subject to sin, will be gloriously resurrected on the last day.

We need not belabour the point that we are witnessing a maleficent resurgence of this heresy in certain tenets of the extreme ecologists, who want to drastically limit the human population to reduce ‘carbon’ emissions, for every person, every baby, is, to their jaundiced, pinched view, a polluter and consumer, and to be greeted into this world only grudgingly, rather than joyfully, or his life snuffed out beforehand.

Hence they promote a new and more subtle Manicheism dressed up in pseudo-scientific garb. Stop having children, or, if you really must, only one, maybe two, and this macabre message even from certain members of the Church. We are contracepting, aborting and just plain willing ourselves out of existence.  Even those not given to the boogeyman of ecologism just don’t seem to care enough to begin and raise families. Despair, lethargy, a subtle ennui, and charity-gone-cold are the order of the day.

And all the while the Muslims, stopped at Lepanto in 1571 and again in 1683 at Vienna, don’t seem particularly given to the global-warming-humans-are-bad hysteria, are having lots of children; Muhammad – in its various spellings – is the most popular baby name in London, England, and is near the top in many other Western cities, whose culture are heirs to Lepanto. We should be aware of the adage, demography is destiny. We reap what we sow, and, more to the point, what we do not sow.

Yet the Rosary, or more properly, Our Lady, saved Europe, our civilization and culture, more than once before, and can do so again, if we but offer ourselves to Christ, to God, through His most blessed Mother.

So dust off that Rosary hanging from your rearview mirror (if it hasn’t been replaced by a dangling mask); pray it daily, meditatively, pondering what ‘salvation’ really means, especially as we approach the anniversary of the last of her apparitions at Fatima on October 13th. You will see the fruit soon enough. The powers of this world, the flesh and the devil himself, which seem now in the ascendant, will have their day, and that day will soon be done.

Hold your heads high, for our redemption is near at hand…

Queen of the most holy Rosary, ora pro nobis!