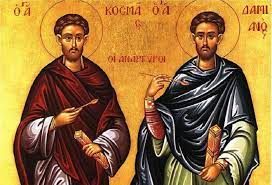 Cosmas and Damian, according to our tradition, were twin brothers, both Syrian physicians and converts to Christianity, who dedicated themselves wholly to their noble vocation, offering their services free of charge – something to ponder in our days of multiple six-figure incomes, even if the labourer does deserve his wages. Cosmas and Damian, we may presume, were always on call, and were known as the anargyroi – literally, the ‘un-silverless’, for taking no coinage to cure the sick. As a side note, I was listening to a radio dramatization of a Daphne du Maurier novel, set in pre-war Britain, and the protagonist just rang the local doctor up, who would pop over to treat whatever ailment was at hand, charging a moderate fee. Those were the days. Now, it’s difficult enough to get a doctor on an ethereal Zoom call, waiting weeks, for which they charge a not-so-moderate fee. There are, albeit, complex reasons for this trajectory, but we wonder why our medical system is collapsing.

The apostolate of Cosmas and Damian was motivated by their deep love of God, and our saints were also wholly given to their Faith, and refused to recant their religion in the persecution of Emperor Diocletian, so were martyred on September 27th, 303. Devotion to them was instantaneous, spreading across the empire and the ages. There are untold numbers of churches and shrines under their patronage, not leas the magnificent basilica of Cosmas and Damian in Rome, dedicated to the martyrs by Pope Felix IV in 527. They also have the honour of being invoked in the Canon of the Mass, and the Litany of the Saints, and are the patrons of physicians, dentists and, of course, twins. In our days of so many crimes against life committed by those who have the art of healing, drifting into mutilation and murder done in the name of perverse ideologies, may these glorious saints pray that medicine once again find its way to first, non nocere – do no harm.

Their feast was originally the day of their entrance to heaven, but they were moved to September 26th to make room for Saint Vincent de Paul. In Canada, they are celebrated on September 25th, to make room for the Canadian Martyrs. But there is much room in the calendar, and even more in heaven, where, as is promised, there are many mansions.