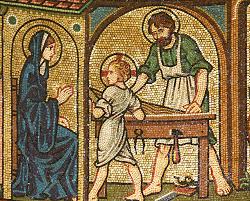 On this Saturday, the First of May 2021, we celebrate the feast of St Joseph the Worker. This feast has a recent history.

In fact, in the midst of the Cold War, when Soviet Communism was at its most aggressive, the Spirit of the Lord inspired the Venerable Pope Pius XII to ease the global tensions of the time by promoting the Christian dignity of work. In a milieu of violent tensions the only way forward was to celebrate the great blessing of being human, specifically by recognizing human work. While addressing the Christian Associations of Italian Workers in Saint Peter’s Square on May 1, 1955, Pius XII did not mince his words in urging the workers, present at the occasion, not to let numerous voices deceive them in believing that the Church is campaigning against the workers. He told them:

“How many times we have said and explained the love of the Church for the workers! Yet it is widely propagated the heinous slander that ‘the Church is an ally of capitalism against the workers!’ The Church, mother and teacher of all, is always very caring towards the children who are in the most difficult conditions, and also has made a valuable contribution to the achievement of honest progress already made by the various categories of workers”.

In order to consolidate what he already said and in reply to the rising worker movements, Pope Pius XII instituted a new liturgical feast in the Church’s liturgical calendar, with the specific intent of honouring St Joseph the Worker. The day chosen was May 1

“[As] the Vicar of Christ, we wish to reaffirm highly, on this day of May 1 … the dignity of work, and [to] inspire social life and laws, based on a fair share of rights and duties … [We have determined to] establish the liturgical feast of St. Joseph the Worker, assigning it precisely on the 1st of May … because the humble craftsman of Nazareth not only embodies the dignity of the arm of the worker … he is also always the guardian of you and your families”.

Let us not forget that the feast of St Joseph the Worker brings forward the evolving awareness, starting from Pope Leo XIII’s encyclical Rerum novarum to Laborem exercens by Pope John Paul II concerning the dignity of human work as well as its creative role in the advancement of the human person.

In 1891, listening to the incredible suffering conditions the industrial workers were going through whilst totally denouncing their exploitation, Pope Leo XIII, in Rerum novarum (1891), the first socio-economic encyclical in Church history, voiced a strong cry of protest against the abusive way workers were being treated. What counted at the time was not the human needs of those who produce the work but simply the promotion of labour as a commodity to be bought at market prices which heavily relied on the law of supply and demand, irrespective, of course, of the human cost.

In his 1961 encyclical Mater et Magistra, St Pope John XXIII manifested great optimism in the way he spoke about the dignity and creative value of human work. He wrote: “Work, which is the immediate expression of a human personality, must always be rated higher than the possession of external goods, which of their very nature are merely instrumental. This view of work is certainly an indication of an advance that has been made in our civilization” (MM 107). Then, the Pope made an interesting comment on farm work when he said: “In the work on the farm the human personality finds every incentive for self-expression, self-development and spiritual growth. It is a work, therefore, which should be thought of as a vocation, a God-given mission, an answer to God’s call to actuate his providential, saving plan in history. It should be thought of, finally, as a noble task, undertaken with a view to raising oneself and others to a higher degree of civilization” (MM 149).

St Pope John XXIII closely followed the tradition of Pope Pius XII, on May 1 of each year, to address the Christian Associations of Italian Workers. In his speeches he always proposed devotion to and imitation of their patron saint, St Joseph. In 1959, John XXIII shared with them a beautiful prayer which highlighted Joseph’s outstanding dignity together with his sympathetic patronage. Here is the prayer:

Glorious Saint Joseph, who disguised the incomparable and sovereign dignity of guardian of Jesus and Mary under the humble appearance of an artisan and with your work provided for their daily sustenance, give your protection to those who are especially entrusted to your care. You know their sufferings and their anxieties, because you shared them yourself by the side of Jesus and his Mother. Do not allow them, under the burden of so many worries, to forget the end for which God created them; do not allow the poison of mistrust to conquer their immortal souls. Remind all workers that in the fields, in the factories, in the mines and in the laboratories of science, they are never alone in their joys and in their sorrow, but that Jesus is always with them, to wipe the perspiration from their brow, and to ennoble their toil. Teach them to transform their labor, as you did, into an exalted instrument of sanctification.

This prayer, composed by Pope John XXIII, helps us appreciate more what St Pope John Paul II wrote in his encyclical on human work on the nineteenth anniversary of Rerum Novarum, Laborem Exercens: “The basis for determining the value of human work is not primarily the kind of work being done but the fact that the one who is doing it is a person”. In a sense, the patronage of St Joseph of the workers makes also clearer and more effective the claim made by Vatican II’s Constitution on the Church in the Modern World, Gaudium et spes in 1965, when it says: “When men and women provide for themselves and their families in such a way as to be of service to the community as well, they can rightly look upon their work as a prolongation of the work of the creator, a service to their fellow men, and their personal contribution to the fulfilment of the divine plan” (GS 34).

In his apostolic letter on the 150th anniversary of the proclamation of St Joseph as Patron of the Universal Church, Patris Corde, Pope Francis offers a very profound reflection on St Joseph as a working father. He says:

“An aspect of Saint Joseph that has been emphasized from the time of the first social Encyclical, Pope Leo XIII’s Rerum Novarum, is his relation to work. Saint Joseph was a carpenter who earned an honest living to provide for his family. From him, Jesus learned the value, the dignity and the joy of what it means to eat bread that is the fruit of one’s own labour. In our own day, when employment has once more become a burning social issue, and unemployment at times reaches record levels even in nations that for decades have enjoyed a certain degree of prosperity, there is a renewed need to appreciate the importance of dignified work, of which Saint Joseph is an exemplary patron. Work is a means of participating in the work of salvation, an opportunity to hasten the coming of the Kingdom, to develop our talents and abilities, and to put them at the service of society and fraternal communion. It becomes an opportunity for the fulfilment not only of oneself, but also of that primary cell of society which is the family. A family without work is particularly vulnerable to difficulties, tensions, estrangement and even break-up. How can we speak of human dignity without working to ensure that everyone is able to earn a decent living?

Working persons, whatever their job may be, are cooperating with God himself, and in some way become creators of the world around us. The crisis of our time, which is economic, social, cultural and spiritual, can serve as a summons for all of us to rediscover the value, the importance and necessity of work for bringing about a new ‘normal’ from which no one is excluded. Saint Joseph’s work reminds us that God himself, in becoming man, did not disdain work. The loss of employment that affects so many of our brothers and sisters, and has increased as a result of the Covid-19 pandemic, should serve as a summons to review our priorities. Let us implore Saint Joseph the Worker to help us find ways to express our firm conviction that no young person, no person at all, no family should be without work!” (no.6).

How wise we would be if, just before starting our day of work, we turn to St Joseph, and, in the beautiful words of Venerable Pope Pius XII, we pray to him:

“O glorious Patriarch, Saint Joseph, humble and just artisan of Nazareth, thou hast given to all Christians and particularly to us an example of a perfect life through diligent labor and admirable union with Jesus and Mary.

Assist us in our daily work in order that we, Catholic artisans, may also see in it an effective means of glorifying God, of sanctifying ourselves, and of being a useful member in the society in which we live. These should be the highest ideals for all our actions.

O dearest Protector, obtain for us from the Lord humility and simplicity of heart, love for our work and kindness towards our fellow-laborers; conformity to God’s will in the unavoidable trials of this life together with joy in bearing them; recognition of our specific social mission and a sense of responsibility; the spirit and discipline and prayer; docility and respectfulness towards superiors; the spirit of brotherhood towards our equals; charity and indulgence with our dependents.

Accompany us in times of prosperity when the opportunity is given for an honest enjoyment of the fruits of our labors; sustain us in our hours of sadness, when Heaven seems to be shut in our regard, and even the very tools with which our hands toil appear to rebel against us.

Grant that, in imitation of thee, we may keep our eyes fixed on our Mother, Mary, thy dearest Spouse, who as she spun silently in a corner of thy shop would let the sweetest smile course over her lips. Besides, may we never take our eyes off Jesus, Who was busily occupied with thee at the carpenters bench, in order that we in like manner may lead on earth a peaceful and a holy life, a prelude to the life of eternal happiness that awaits us in Heaven for ever and ever. Amen.