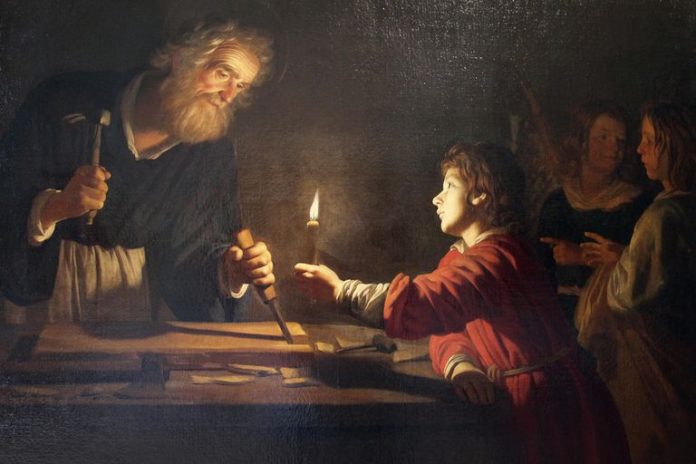 Saint Joseph has two ‘feast’ days in the universal Church, neither of which is technically a ‘feast’.  The first, on March 19th, is his principal day, celebrated as a full solemnity, usually in Lent (unless bumped into Easter by its falling during Holy Week).

Then there is today’s ‘optional memorial’ of Saint Joseph the Worker.  I personally think this day could do with a bumping up at least into memorial territory, or even a feast, due to the importance of the issue of work in our world, and what it means for Man.  Pope Pius XII instituted this feast in 1955 (when it was a feast, and still is, as far as I know, in the usus antiquior), as a Catholic alternative to the Communist-inspired ‘International Workers’ Day’.

Workers of the world unite?  Yes, indeed, but around the proper principle of work:  Not as a materialistic endeavour, whose sole purpose is to produce ‘goods’ for the State or the marketplace, but rather, as a free and ennobling activity whose primary purpose is to perfect the worker himself.

This is what Pope John Paul II in Laborem Exercens, his masterful meditation on human labour, calls the ‘subjective’ dimension of work, making the worker himself better, and more apt for heaven, by exercising his talents, which exceeds in importance the ‘objective’ dimension, the production of goods themselves, which is where most of our energy and focus currently goes. We should value quality over quantity, and being over having.

As the Holy Father put it:

It matters not so much what we do, but who is doing the work:  All labour is dignified by the very fact that it is a human person, made in the imago Dei, who is working.  Yes, some should be remunerated more than others based on the objective value of their work (we ‘value’ the work of neurosurgeons more than baristas, or most do).  But every worker deserves a just wage, dignified work conditions, and for their work to be valued.  Everyone has a right to work, in some way, shape or form, which is why the Magisterium can truly call the plague of widespread unemployment a ‘scourge’, recalling of course that this right also implies a duty on the worker’s part to work well, with excellence, diligence and greatness of soul.

We can safely surmise that this is how the foster father, the nutricie, of the Christ worked, teaching his divine Son the ways and means of human labour.  And this is what Saint Joseph teaches all of us in today’s feast/memorial.

(I will add a note here in response to a reader:  In the original Latin, ‘foster father’ is ‘nutricie’, which imples something different than our modern notion of ‘foster father’.  Saint Joseph was indeed the real, although not biological, father of the Christ).