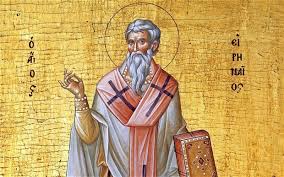 Saint Irenaeus (+202 A.D.), bishop of Lugdunum – now Lyons – in the second century of the Church’s existence, a disciple of the martyr Saint Polycarp, who was in turn a disciple of Saint John the Apostle, is himself not only one of the clearest links to apostolic Tradition, but his writings and thoughts form the basis of what we now know as that queen of the sciences, ‘theology’, the application of reason to the revealed word of God. He is considered the founder of theology, if we also include Saint John himself.

Raised in Asia Minor in a Christian household, near what is now Izmir, Turkey, Irenaeus, whose name means ‘maker of peace’, traveled west, was ordained a priest, and, after his spiritual and intellectual gifts were clearly recognized, was eventually consecrated bishop in the Roman territory of what is now France.

Irenaeus wrote much, and much of what he wrote thankfully survives.  His main battle was against the Gnostics, a powerful sect that claimed to have secret, esoteric knowledge of the path to ‘salvation’. Their theories were complex, quite bizarre to our reading, but, perhaps to that very esoteric complexity, they convinced many – the first ‘experts’, if you will.

They were also dualists, holding that matter, including our own bodies, are evil, the result of a god of darkness, while spirit and soul were good, created by a good god. The Gnostics claimed this knowledge was from Christ Himself, not via the Magisterium, thereby separating themselves from the hierarchical and Catholic Church. Hence, one could do what one wanted with the body, for it was the ‘soul’ that matter (read: so long as my ‘intentions’ are good).

They Gnostics were the first real ‘heretics’, literally, those who create a schism or rip in the Body of Christ. We should beware those who seek salvation outside the Church, or that they know better, their natural intellectual or charismatic gifts overcoming the duty of the ‘submission of mind and will’ to proper teaching authority.

The saint’s powerful treatise Adversus haereses (Against Heresies) put paid to the Gnostics, arguing against their doctrines with a power, clarity and simplicity that has provided a model for clear theological thinking ever since. He posited three rules for orthodoxy: Scripture, Tradition and the definitive teachings of the successors of the Apostles, especially that of the bishops of Rome.

This work is quoted from at length in the first section of the universal Catechism (cf., #172-175), and it is worth quoting also here as we meditate upon this saint today, signifying the unity that has been the primary hallmark of the Church from her very foundation:

Indeed, the Church, though scattered throughout the whole world, even to the ends of the earth, having received the faith from the apostles and their disciples. . . guards [this preaching and faith] with care, as dwelling in but a single house, and similarly believes as if having but one soul and a single heart, and preaches, teaches and hands on this faith with a unanimous voice, as if possessing only one mouth…

We guard with care the faith that we have received from the Church, for without ceasing, under the action of God’s Spirit, this deposit of great price, as if in an excellent vessel, is constantly being renewed and causes the very vessel that contains it to be renewed

Tradition has it that the holy bishop was martyred in a local persecution of Catholics in the year 202, under the reign of Septimius Severus, his relics placed in the church of Saint Joseph in Lyons, soon renamed after him as devotion to him grew.

Alas, the tomb of the saint was pillaged and destroyed by the Huguenots (French Calvinists) in 1562, evicting that mysterious prophecy of Saint Paul that ‘heresies we will always have with us’, just as true now as it was 500 or 2000 years ago.  What is old is what is new again.

With Saint Irenaeus, we may find the truth in Tradition, in that constant and firm Tradition going back to the Apostles, found in the Catechism, encyclicals, and all the definitive teaching of the Magisterium, which helps us not only to understand Scripture and the very mind and will of Christ, but to attain the true path of salvation, found only in Christ and the Church He founded.

We may trust that grace and truth will abound all the more, and will triumph in the end, for those with eyes to see and ears to hear, and simple, child-like hearts open to the grace of God.