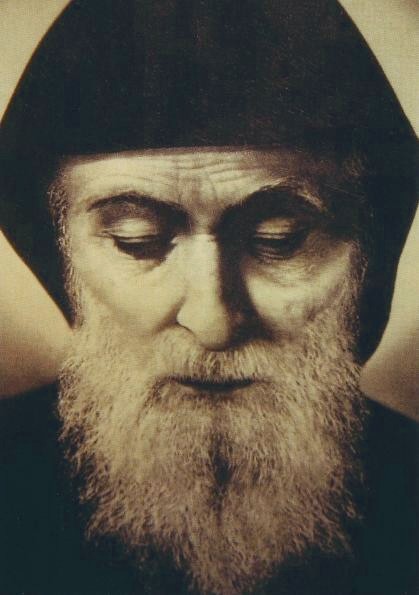 God often works through hidden ways, and those who live a hidden life – amare nesciri, as Saint Philip Neri was wont to say, ‘love to be unknown’. Behind the noise of the world, the saints are sowing the seeds of the kingdom, and one of the most ‘invisible’ of them all was the priest-hermit Saint Charbel Maklouf (+1898) whose life was an icon of ascetic, chaste, humble, monastic sanctity, spent in a desert monastery in Lebanon, praying and sacrificing for the world and for souls.  Saint Charbel’s life was  completely devoted to God from his early youth, fruitful far beyond what our limited senses can tell us, the ‘hundred fold’ of which Christ speaks in the Gospel.

As today’s Office of Readings has it:

You also know, my dear brethren, that ever since the transgression came to pass, the soul cannot know God unless it withdraws itself from men and from every distraction. For then the soul will see the adversary who fights against it. And once it has seen the adversary, and has overcome him every time he engages it in battle, then God dwells in that soul, and all the labour is changed to joy and gladness. But if the soul is overcome, then there come upon it grief, boredom, and many other kinds of heaviness.

The world is immersed in such ‘grief, boredom and heaviness’.

For do not suppose that because the righteous were in the midst of men it was among men that they had achieved their righteousness. Rather, having first practised much quiet, they then received the power of God dwelling in them, and then God sent them into the midst of men, having acquired every virtue, so that they might act as God’s provisioners and cure men of their infirmities.

Charbel died on Christmas Eve, two years before the turn of a century that would see the world change dramatically, with technology, war, conflict, genocide and the rise of global totalitarian regimes, whose shadows still haunt us. Saint Charbel’s life was immersed in God, not the world, and His body was found incorrupt months afterward, and decades after that (his tomb was last opened in 1955) miracles, especially at his tomb, have never stopped. For regardless of how much happens, good and bad, the Cross – the truth and love – of Christ stand forever.

Saint Charbel was known for bringing peace between Muslims and Christians. The two religions may be incompatible, but individual persons and communities may find, and have found, common ground of co-existence.

Yet this is also the vigil of Saint James, the greater, known for his help in the defence of Christendom, and his intercession on behalf of the Catholic Crusaders. As the saying goes, si vis pacem, para bellum – if you want peace, prepare for war. Cathedrals and churches burning, statues beheaded and defaced; things aren’t all that pretty out there.

But our battle is not primarily of this world, nor another world war. As Saint Paul warns: For we are not contending against flesh and blood, but against the principalities, against the powers, against the world rulers of this present darkness, against the spiritual hosts of wickedness in the heavenly places. (Eph 6:12)

Hence, peace also arrives, and arrives more assuredly, by prayer, with a life offered up to God in reparation, by prayer and repentance, the whole notion of metanoia and the Magdalene. For one truly converted soul can in turn convert the world once again to the true, revealed religion, the worship of Holy Wisdom Himself.

I will leave you for now with a final word from the Office:

Show yourselves strong in what you do. Those who depart from quiet are unable to conquer their passions or to fight against their adversary, because they are subjected to their passions. But in your case, you overcome the passions, and the power of God is with you.