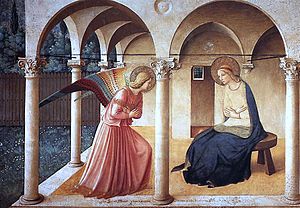 How often have we heard it said that beauty is in the mind of the beholder, that it has no objective existence of its own? The proof offered by some is that abstract art has an appeal unmatched by representational art, whereas others see “objective” art as obviously superior to the “empty forms” of abstract art. This, it seems to me, is not a proof of anything more than that some people might see beauty where it is not, and others might not see it where it is. But relativism in art is as wrong as relativism in morals.

Several years ago I was attending a Mass celebrated by Bishop Plácido Rodriguez at Holy Spirit Catholic Church in Lubbock, Texas. I had brought my camera with me because this Mass celebrated the 10th anniversary of the founding of the parish and I wanted to help memorialize the event. I situated myself in a front pew left of the altar. At the point when the Bishop was incensing the altar, without in the least knowing what kind of photo I was there to get (the Holy Spirit surely knew) I lifted the camera and snapped a picture just as the celebrant passed by the altar and beneath the great crucifix above it. With the instant replay in the viewfinder I knew at once that I had been guided, with no talent of my own, to produce a
worthy memorial of the event. On my part it took neither artistic training nor skill to produce a sacred image so exalted that one of the great masters of the Renaissance might have painted it. Was it mere serendipity? Or was the Holy Spirit, the great Arbiter of all things true and beautiful, hiding in my camera?

What this incident suggests is that there is a profound gap between the artist and the cameraman, a gap that perhaps can be closed to a degree but never bridged. No photograph taken of a sacred subject can begin to compare with the sublime beauty captured in the Last Supper of Leonardo da Vinci or the Last Judgment of Michelangelo. Sacred art is the supreme art; the only art that incites tears of joy; the only art that invites us to kneel and weep for the downward pull of our sins. Listen to Amazing Grace sung at the burial of a loved one; then let anyone try to imagine this loved one is not among the immortals. Sit in the darkness of a room and hear Mozart’s Ave verum Corpus; then let anyone deny proof offered that God exists … and that the Body, Blood, Soul, and Divinity of Christ can be found on the altar. Who other than the Holy Spirit could be hiding in the shadows of such divine music? After all, is there any other explanation why such music should evoke such powerful conviction of God’s presence among us?

The sense of the sacred is in all of God’s creation, as Charles Darwin noted in his Origin of the Species (in the last edition before his death). “There is grandeur in this view of life, with its several powers, having been originally breathed by the Creator into a few forms or into one; and that, whilst this planet has gone cycling on according to the fixed law of gravity, from so simple a beginning endless forms most beautiful and most wonderful have been, and are being, evolved.” So the scientist also is not without his sense of the sacred. How is this sense in us all, if it is not planted in us by the design of a kindly God who wants to share with us his delight in the goodness of all his Creation?