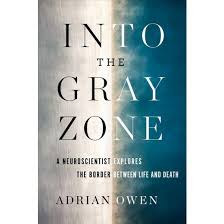 Imagine that you could communicate with someone in a coma. What kinds of questions would you ask? Maybe you would ask if they had memory of their life before the tragedy, or if they were in pain. Maybe you would ask if you should keep playing that Celine Dion record they liked in high-school everyday (in the case of one young woman who awoke years later, the answer was a resounding no). The ability to get answers to such questions has long been considered science fiction, however, recent technological developments have made such communication possible.

In his book “Into the Gray Zone: A Neuroscientist Explores the Border Between Life and Death” Adrian Owen uses breakthroughs in technology and science to investigate what it’s like to be caught up in that twilight zone of conscious awareness often referred to as a vegetative-state. Using fMRI, PET, and other scanning techniques, Dr. Owen studies the neurological responses of patients from outside stimulation. The task isn’t as easy as it sounds. The brain is hard wired to automatically respond to some forms of stimulation (hearing someone cry out your name for example). To demonstrate that someone is consciously aware, not just having a knee-jerk reaction, Dr. Owen and his team had to develop tests that show the patient is actively responding in the study.

For example, the brain activity displayed while watching a movie tends to be uniform across all healthy, fully conscious brains. Exploiting this phenomenon, Dr. Owen’s patients are shown an Alfred Hitchcock film (the 1961 classic “Bang! You’re Dead) while their brain activity is monitored. The results are then compared with those of healthy individuals. A close match indicates that the patient was following the movie and was therefore aware or conscious. The results from these experiments show that such people are often far more aware than previously realized.

Although we don’t have precise numbers, it is estimated that there are somewhere between fifteen thousand and forty thousand individuals in the United States who are in a vegetative-state. Of these, Dr. Owen believes that  “… 15 to 20 percent of people in the vegetative state who are assumed to have no more awareness than a head of broccoli are fully conscious, although they never respond to any form of external stimulation.” This is astounding, and should make us all feel a little uneasy.

Dr. Owen goes a step further than just establishing conscious awareness. In some patients, he was even able to produce yes/no answers. This result has implications going beyond just asking if they want the Celine Dion album turned off. For example, Jean-Dominique Bauby, an editor, was paralyzed with only the use of his left eye. Using a series of two hundred thousand blinks, he was able to write an entire book, “The Driving Bell and the Butterfly”. While such an endeavor is not currently feasible for individuals in a vegetative state, it’s not impossible that new tech would make such communication possible.

Dr. Owen also addresses the issue of quality of life. He mentions a study conducted by Steven Laurey, wherein patients with locked-in syndrome  “…(conscious people who were only able to communicate by blinking or vertically moving their eyes.” were asked questions to evaluate their quality of life based on a scale from -5 to 5. The results were interesting:

“Contrary to what most of us might expect, a significant proportion of the patients (72 percent of those who responded) reported that they were happy. What’s more, a longer time in a locked-in syndrome was correlated with how happy this group said they were! … Only 7 percent of the entire group surveyed by Laureys and his team expressed a wish for euthanasia.”

Dr. Owen is a scientific skeptic, and the book is not a defense of the Catholic position on euthanasia and end of life issues. The underlying philosophy of the book is materialistic. This is perhaps best exemplified by a quotation, used in the book, from Francis Crick the physicist/molecular biologist:

“You, your joys and your sorrows, your memories and your ambitions, your sense of personal identity and free will, are in fact no more than the behavior of a vast assembly of nerve cells and their associated molecules.”

Despite his skepticism, Owen isn’t hostile towards religion in the book, and for Catholics seeking equip themselves for debates on end-of-life issues “Into the Gray Zone” provides an excellent update on the scientific and technological aspects of the topic. Despite the technical nature of the material, the book is readable, thought provoking, and even at times humorous. The reader is struck by how suddenly a person can be thrown into the vegetative state, with many of the case studies being young people in their teens and early twenties who had little or no warning of the accidents that put them there. Inform yourself on the ethics, philosophy, and science of the “gray zone” because as the saying goes, “The life you save may be your own.”

Into the Gray Zone: A Neuroscientist Explores the Border Between Life and Death