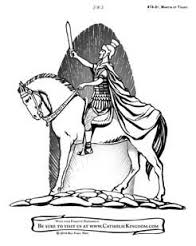 Again, in the mysterious designs of providence, on this day in the Church we also commemorate Saint Martin of Tours, a pagan and a soldier who converted to Catholicism very early in life, perhaps at the tender age of ten, and against the wishes of his still-pagan parents at that.  He was conscripted into the Roman army, and served well.  One day, he came across a shivering beggar, and, moved by his Christian conscience, tore his cloak in cloak in half for him; later, in a vision, the beggar turned out to be Christ Himself, a sight that greatly deepened Martin’s conversion. He left the army soon afterward and adopted the life of a hermit.  Word of this former-soldier-turned-penitent grew. Lured to Tours in 371 by a claim that there was someone sick who needed help, Martin was constrained by the townspeople, who recognized his great sanctity, to become their bishop.  The good soldier-monk tried to hide in a barn (see my post on fleeing from high office), but the flock of geese also hiding therein gave him away by their squawking.   God chooses whom He may by what means He may, we may suppose, and even geese do the will of their Maker.  The good bishop Martin lived an exemplary life of prayer, repentance and almsgiving and, after his death in 397, was soon adopted into the Church’s calendar as the first officially canonized saint.

Martin has also been recognized as the first conscientious objector, serving his emperor, but, so the story goes, refusing to shed blood, a position that is permitted by the Church (cf., CCC, #2311). This is an a propos topic, not just for today, commemorating all those who did ‘shed blood’ and died serving their country, but also in light of the new film by director Mel Gibson, Hacksaw Ridge, a fictional account of real-life conscientious objector Desmond Doss, whose Seventh Day Adventist faith, he considered, obliged him never to bear arms; he served heroically as a medic, desiring to save life, not to take it.

The Catholic Church, as is often the case, has a more nuanced position than the one Doss’ faith held, for even though one can give up one’s own life, there are cases where one must defend others, an obligation that becomes a “grave duty for one who is responsible for the lives of others” (CCC # 2265), like a father protecting his wife and children. Sometimes, as the passage goes on to state, “the common good requires that an unjust aggressor be rendered unable to cause harm”, even if this requires, sadly, lethal means.

So we pray for all those who gave their lives for their country, one way or the other, in battle or not.  As even the ancient Romans recognized, dulce et decorum est pro patribus mori, ‘it is a sweet and decorous thing to die for one’s country’, but, in a more proper translation, for one’s fathers and ancestors.  We should recall that in ‘defending our country’, even to point of killing and being killed if need be, we do so to protect others, real flesh and blood human beings, not some abstract ideal or flag.  The only just war is a defensive war, and all of our actions, even within such a war, must be acts of charity, of the love of God and of neighbour, especially for those closest to us, for hearth and home.

It is a sad and mysterious thing that there is so much evil out there, and a lot of men under its demonic spell, so as another Roman saying goes, si vis pacem, para bellum, if you want peace, prepare for war.   Every man should know and have what it takes to defend his own ‘hearth and home’.  We honour those who died, protecting our peace and freedom, and it is up to us to do what we can to maintain that peace and freedom, and not continue to squander it away in a new, more subtle and perhaps even worse forms of a atheistic and messianic totalitarianism which they gave their lives resisting.

Requiescant in pace, and may we all meet in a blessed eternity.