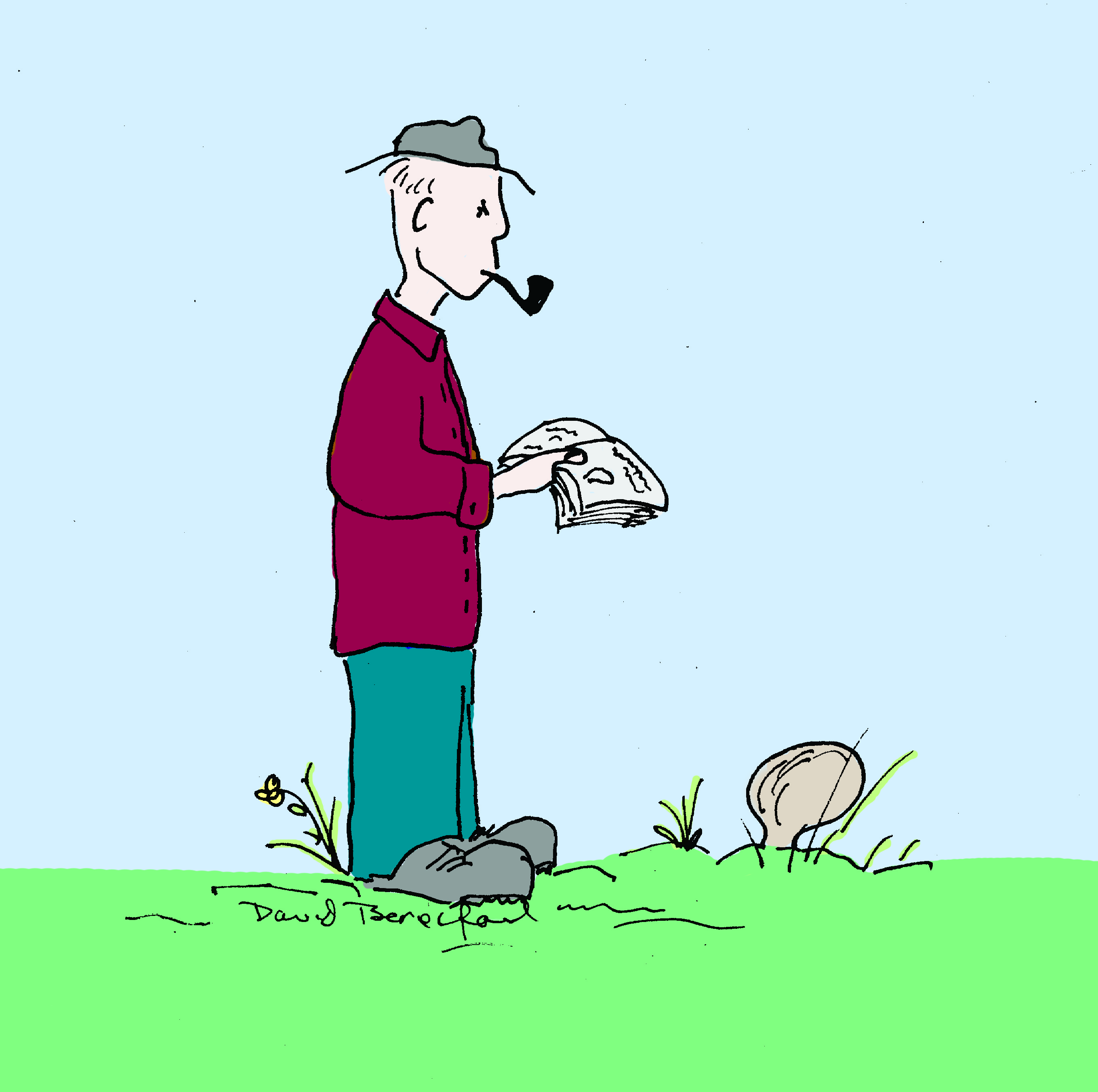 “What can go wrong?” I asked, “the book says it is safe, and it shows a picture of the thing. Listen! It says right here that there are no poisonous puffballs, and this is a puffball.”

We had found some puffballs in the field behind our house, large round mushrooms about the size of a fist or a bit bigger, and I insisted against my wife’s pleading that we not have them for supper.

Mushrooms are funny things, and mushroom books are even funnier. This spring I found a morel and was eager to try it because the book described morels as prized mushrooms. The tricky bit is that they look like false morels, which are poisonous. My book advised the mushroom hunter against eating the false morel, and further warned that false morels often grow among the true morels. I did not have the courage to try the morel, and after letting it rot in the fridge for a month we threw it away.

My next foray into the world of wild mushrooms was with a large orange monstrosity called a bolete. We found these growing in the woods and this time it looked like we were on safe ground. “A king among mushrooms,” my book said, adding, “These are among our choicest mushrooms, much prized by connoisseurs.” Hot dog! So we picked four of the biggest ones from a huge cluster. Just to be sure, I checked my other book when we got home, which cautioned that “beginners should avoid for edible purposes all Boleti, since recognition of the edible species is difficult, even for experts.”

So, I was delighted to find the puffballs since they were a safe, sure thing, and I asked that they be added to the night’s menu. “Just think,” I argued, “how the children will remember harvesting wild puffballs from the land for supper—what a memory for the children!”

Theresa sliced up one of the puffballs, which was white and firm inside (from the book: “make sure they are not yellow or they will be bitter”) and fried them with some butter and onions. Then she placed these on a plate in the middle of the table.

After grace, I announced that “I want everyone to eat some,” and loaded my plate with puffball slices. They tasted kind of like a soft sponge, a bit dry but otherwise innocuous.

“It’s funny how these puffballs aren’t as big as the book said giant puffballs are supposed to be,” commented my oldest son Patrick. “Is that because we found them in a field instead of in the woods?”

“How do you mean?” I asked, my mouth filled with puffballs.

“Well, the book says that giant puffballs are found in the woods, and are as big as a soccer ball.”

“What book is that—here, gimme that book.”

There, in a book I had not seen before, was a picture of a giant puffball in the woods and right beside it a picture of the smaller, false puffball in a grassy field with the word Poisonous across it and a caption that read, “Symptoms are nausea, chills, headaches, fever, and general feeling of ill health. Fortunately these are not deadly.”

“Don’t eat anymore. I think they might be poisonous,” I said, feeling queasy. Luckily only I had been eating them. “Theresa, find the mustard powder please!” I begged. I mixed two tablespoons of mustard powder in a glass of warm water and gulped it down. The effect was almost immediate, and I raced upstairs for the bathtub. It is a funny thing, but the mustard hurt even more coming up. As I sat on the floor leaning over the side of the tub, Theresa called up to me.

“Did you not read the next page? You are not going to be sick after all.”

“If you turn the page and read the whole section rather than picking and choosing the parts you wanted to read, you would find that it says that the false puffball is found on the west coast and is black inside. The book also says that there is a smaller puffball about the size of a baseball that grows in open fields, and that it tastes even better than the giant puffball. The book says that the smaller ones are common up north, where we live. I don’t think ours were the poisonous ones, the picture looks identical to the one I cooked. What is it that you are always saying? People who pick and choose to believe what they want to are what? Heretics, I think you call them. You, sir, are now…”