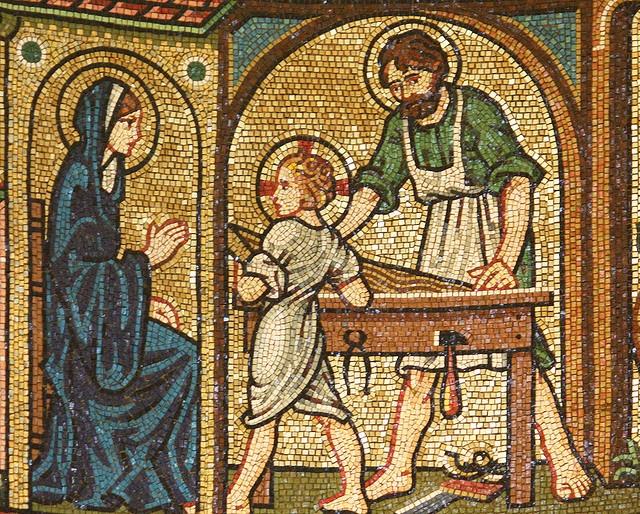 Tomorrow, besides being the much more important solemnity of Corpus Christi (at least here in Canada, more on which in a bit) is also Father’s Day, and a recent discussion I heard on the CBC debated whether such a commemoration, along with the complementary and longer-standing Mother’s Day, is inherently discriminatory.  After all, what of family’s with no explicit mother, or two ‘fathers’, or two ‘mothers’, or a menage-a-trois, quatre, cinq, or whatever other happy grouping one’s imagination and current technology and marital laws, or lack thereof, may conjure.

Fathers’ Day has been celebrated since the Middle Ages on the solemnity of Saint Joseph (March 19th) or so I have read, but has now been moved in light of secular values to the third Sunday of June, making it a sort of Hallmark-holiday, unconnected in the modern agnostic mind with the great and silent witness of the guardian and earthly father of God’s Son, the nutritor Domini.

The current androgyny, underlying so many of our current problems, presumes that it matters not what ‘gender’ one is, or even if one even admits to having one. Yet the denial of a the deep and abiding differences between men and women, the male and female sex, masculine and feminine, is really at its base a denial of the very nature of God, in Whose image Man is made.  God is not a static entity, a uniform ‘will’ decreeing from on high, as various forms of Islam would have it. Rather, as we were reminded last Sunday, God is a Trinity, a community of Persons, Father, Son and Holy Spirit, and Man’s nature as male and female, and more perfectly as father and mother, flowing forth their own creative potential, reflects this.

As Archie Bunker used to sing, who sadly mocked patriarchy, it is time to get back to the time when ‘men were men, and women were women’, in all their genius, beauty and perfection. I just came from a wedding of two former students,  in the usus antiqiuor, the rich prayers of which liturgy signify clearly to this truth.  I wish them well as they go forth as husband and wife, and hopefully as soon-to-be father and mother, showing forth the glory of God, in His own Three Persons.

Regardless of the modern zeitgeist, we can still wish our fathers well, and offer them our deep gratitude for giving us life, raising us, for their example, witness and all they have done, up until ripe old age, to make us the men and women that we are.  So a blessed Father’s Day to all you fathers, biological or spiritual, and may you see the fruits of your paternity in a happy Jerusalem.