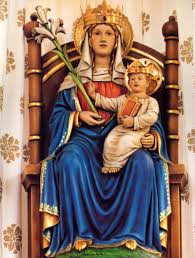 (In light of today’s official ‘feast’ of Our Lady of Walsingham, September 24th, the premier Marian shrine in the British Isles, I am re-posting here my slightly modified and updated reflections on my own pilgrimage there in the summer of 2018…Ah, better days of yore. Also, England was re-consecrated as ‘Our Lady’s Dowry’ on May 29th of last year. )

Norfolk, in south-eastern England, remained staunchly Catholic during the ‘reformatory’ troubles begun by Henry VIII. The Dukes of Norfolk held fast to the Faith through the travails the the Tudors, Henry, his son Edward and his daughter Elizabeth, where the line ended. But their non-Tudor successors carried on their anti-Catholicism for centuries yet…

The 15th Duke of Norfolk, Henry Fitzalan-Howard, provided much of the funds to build the grand cathedral of Saint John the Baptist in the nearby city of Norwich in the 19th century (of course, after the glorious 12th century original glorious Gothic structure, named after the Holy Trinity, was ‘adopted’ for Anglican services in the 16th century, and continues to be used by the ‘Church of England’).

It was in this region, rural and remote (insofar as anything in England is really ‘remote’…one is never more than 70 miles from the sea, regardless of where one goes), half a millennium before the Reformation, that Our Lady appeared to a noblewoman, Richeldis de Faverches, in 1061, asking for an exact replica of the Holy House of Nazareth to be built.

The house, a scant 26 by 13 feet (small is, after all, beautiful, and are not tiny homes making something of a comeback?), constructed apparently by miraculous means, soon attracted pilgrims from all over England and beyond. Miracles abounded. An impressive Augustinian abbey, anything but ‘tiny’, was soon built around the humble holy house, and the village of Walsingham grew.

All that now remains of the abbey is its impressive arch, offering some scale of its overwhelming size. As one local man mentioned to me, the small house symbolized Our Lady, the abbey, her Son, for she, the lowly handmaid, always points the way to Christ, the Alpha and Omega.

Walsingham soon became one of the four great pilgrim sites of the Middle Ages, besides Jerusalem, Rome and the shrine of Santiago de Compostela on the Spanish coast.

A custom developed of walking the last ‘Holy Mile’ to the shrine barefoot; a chapel was built at this starting point in the 14th century, where pilgrims would leave their shoes; hence its customary name of the ‘Slipper Chapel’, the only part of the shrine, besides the arch, that still stands to this day.

Almost every monarch of England made a pilgrimage to Walsingham, and Edward the Confessor (+1066), who made the pilgrimage eleven times, offered the nation to Our Lady as ‘her dowry’. Henry VIII, who would later oversee its destruction, went there as a young monarch in 1511, trudging the last ‘holy mile’ barefoot through the snow, in thanksgiving for a son that had finally been born born (the boy, alas, tragically seven weeks afterward, and we may wonder what this did to Henry’s later fractious relationship with the Church, even with God Himself).

And so it was until the dissolution of the monasteries, and Henry’s rebellion against Rome and the Church in 1535 over the question of his marriage, and the Pope’s refusal of an annulment from Catherine, so Henry could marry his paramour, Anne Boleyn and also, conveniently, loot the Church’s wealth.

The day I began writing this just across from the very site, is providentially enough the 480th anniversary of the dissolution of Walsingham. On the morning of August 4th, 1538, John Petrie, the King’s representative, rode defiantly into the Abbey grounds on his horse, stepped off, and received the deed from the Abbot giving over all the grounds and treasuries to the king. They melted all the precious vessels, the copper roof, the tin, the embroidery, anything they could get their hands on. The precious statue of Our Lady was, according to some reports, dragged through the streets and burned, but recent evidence suggests that the real image survived. And the devotion to God’s Mother and England’s spiritual queen? The agent responsible for the destruction and pillage had this write to his own boss, Thomas Cromwell:

To this day, the ‘image of Our Lady’ is still in the heads, and hearts, of many an Englishman, and Catholic throughout the world.

As I learned at a talk by Father Michael Rear (an Anglican convert, and expert on all things Walsingham), the Abbot had appealed to Cromwell, invoking canon law which, to my happy surprise, stipulated that any abbey that was deemed no longer viable must be turned into a college or a place of education (and what a college some of those impressive abbeys would have made! And could still do so…).

But Cromwell and his king were implacable. Looted and stripped, the abbey was left to ruin, the Holy House abandoned, decaying to dust.

Most of the monks signed the Oath of the King’s supremacy as Head of the Church, but their sad obeisance could not save the shrine. I say ‘most’, for the sub-prior and one other monk did not, and they were taken, convicted on flimsy and hearsay evidence of ‘rebellion’, confined to an underground dungeon in pitch darkness, where they spent the night in prayer, before being marched over to what is now known locally as ‘Martyrs’ Field’ (there is no sign or marking, just an abandoned grassy lot) where they were summarily hung, drawn and quartered before a crowd of on-lookers, many of them forced to be there, to witness what would happen to ‘traitors’.

The same grim fate awaited many residents of Walsingham, who even whispered thoughts of defiance against the royal highness. As Pope John Paul II said, and as the twentieth century gave witness, totalitarianism will brook no defiance, as we to our dismay might well discover once again…

As a final affront, the humble statue of Our Lady of Walsingham, of which Erasmus wrote so movingly in his own pilgrimage, was consigned to flames at Chelsea later that September. (Then again, as in the days of Roman persecution, sometimes the Catholics would provide fake holy objects for burning, keeping the real ones hidden…)

The shrine and Abbey had been the main attraction, and the primary employer of the village, hundreds dependent upon its income. After their destruction, Walsingham descended into poverty and neglect, a forgotten backwater village, the haunt of birds and owls, as the poem describing its lament, laments.

That is, until the end of the nineteenth century, when an energetic Catholic convert from Anglicanism, Charlotte Boyd, purchased the land on which the Slipper Chapel still stood, and with her funds, restored the place, slowly but surely.

It was not until after her death in 1906 that the chapel became a place of pilgrimage (before that, pilgrims would go to the much more accessible King’s Lynn as an alternate site). By 1934, Walsingham was declared the National Shrine of England, once again. Popes ever since have approved Walsingham: A new statue was chosen by Leo XIII, a model of the original, known from an image that survived. Pope Pius XII had the statue solemnly crowned, and Pope John Paul II placed the statue on the altar for his outdoor Mass on his own visit to England in 1982. Pope Francis in 2015 – yes, he – raised the shrine to the status of a minor basilica.

Pilgrims now flock to Walsingham in increasingly great numbers, in spite of, perhaps even because of, its remoteness and its primitive road system. Behind its humble exterior there is a great spiritual beauty and power, waiting to awaken in full glory, for those who have but eyes to see.

Yet there is one missing bit in all this: The site of the Holy House itself, which Charlotte Boyd was not able to purchase, and is still in private hands. One must pay to enter the ruins of the Abbey and the place where the house once stood (at about 6 pounds sterling per person – about 13 Canadian dollars – a not insignificant sum, especially for families). So Catholics gather to pray at the Slipper Chapel, and walk the Holy Mile into the town, where at least they can get a glimpse of the original site through the grates in the still-standing pilgrims’ gate.

So we should pray that the Church may soon have the site of the Holy House once again, and the end, as we all as the beginning, of the pilgrimage may be open to all and sundry, so that, as Leo XIII exhorted, England may indeed return to Walsingham in all its former and present glory, and, as the same pope promised, Our Lady return to England once more.