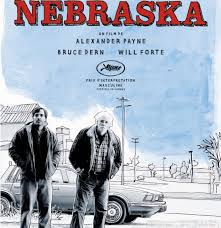 Christopher Dawson’s statement is a prophecy that has come to pass in our day. Nebraska is proof of the fact, if any be needed. The plot of the movie hangs on the venerable and powerful image of a journey, which has inspired authors from antiquity to the present. There is here, however, a difference. Normally, the point of a journey is its destination, whether it be the celestial city of Bunyan or Dante, the shrine of Santiago de Compostela as in the film The Way, or the open-ended ambiguity of Cormac McCarthy’s The Road. On the way, characters engage in a spiritual or psychological journey inwards, which serves to make them different at the close of the experience from what they were at the outset. But in Nebraska, the journey has no goal; nor is there any alteration in the characters. They travel, they endure, they return, and nothing more.

Woody Grant, a semi-senile octogenarian taken in by an advertising scam, is convinced that a million dollars is waiting for him in Lincoln, Nebraska. Neither his accommodating son David nor his acid-tongued wife, Kate, can convince him otherwise, with the consequence that David decides to drive his father from Billings, Montana, to Lincoln as the only way to disabuse him of his fantasy. The journey is replete with humorous incidents, but the overall effect is of an America that has lost its soul. David sums it up when he asks his mother to humour the old man because the money has given him “something to live for.”

The cinematography is relentlessly bleak: a washed-out black and white. The characters are dowdy and seedy, poorly dressed and housed; they’re almost to a man old, as if the whole society were on the brink of the grave, a sort of zombie movie in the making. The physical ruin of the people is matched by the decrepit state of the abandoned farmhouse of Woody’s youth; everything and everyone is run down. It’s winter, and the open spaces of the prairies have never looked emptier and more sterile, mile after mile. En route, they stop at Hawthorne, Nebraska, Woody’s home town, to visit Aunt Martha and Uncle Ray with their moronic sons, Bart and Cole. Small-town America isn’t what it used to be. The men spend their time in a catatonic state in front of a television watching football. The conversation, if one can apply the term to spasmodic utterances about automobiles, is superlatively stupid.[2] The women congregate in the kitchen to gossip, as voluble and as inane as the men are silent . . . and inane. Uncle Ray, when he can pry himself loose from the television set, spends his time watching what little traffic there is, a point that is made use of at the end of the movie. Kate has joined them in Hawthorne for a family reunion of sorts, but as she gets off the bus she tells David to drive her at once to the graveyard. Where else would she go in this moribund society? Once arrived, Kate describes with brutal frankness the failings of her in-laws. The scene descends further into vulgarity when she visits the grave of an erstwhile boyfriend. Things were not better back in Billings. Woody is a long-time alcoholic constantly abused by his shrewish, unhappy wife, to no effect. They have two sons. David, an unsuccessful clerk in a media store, is tender but indecisive and ineffective. His live-in girlfriend has just left him, and he wonders why. “Should I have offered to marry her?” he muses. His father has nothing to say on the topic, having merely fallen into marriage faute de mieux.  The other son, Ross, is a substitute news anchor on television. Kate and Ross, the realists, line up against Woody and David, especially in the madcap scheme to drive to Lincoln.

Once in Hawthorne, Woody becomes a ten-day or, rather, a ten-hour wonder as a millionaire in the making. The little town is agog with the news, and the local paper, The Hawthorne Republican, plans to run a story of him. The most genuine moment in the film results when David visits the editor to prevent the story from appearing. Mrs. Nagy, as it happens one of Woody’s old flames, talks to him about his father and shows him an article published in the 1950s when Woody and Ray had returned as heroes from Korea. This moment of remembered military glory signifies the resurgence in Hawthorne, and by implication in America, of a tribal society based on honour, shame and revenge, which Margaret Visser has brilliantly described in Beyond Fate.[3] She notes that honour and shame are external pressures, independent of the innocence or guilt of the individual, merely forcing him into external conformity to the norms of his society. Christianity had, with greater or lesser success, replaced honour and shame with guilt and forgiveness, interior dispositions that open up the possibility of reconciliation between parties at war, on the macroscopic or microscopic level.

Woody’s long-forgotten celebrity is renewed when news of his financial status circulates. Old acquaintances, friends and partners congregate, “like vultures,” Kate says, to share his good fortune by congratulations and then by friendly requests that soon turn into aggressive demands for a share in the loot. Honour, bestowed without merit on his part, turns to public humiliation—shame—once the absurdity of his expectations has been revealed. Revenge, with its restoration of honour, is also achieved at two moments in the film. The first occurs when David socks the most obnoxious of his father’s assailants in the bar where the whole assembly, like the furies of Greek myth, are ridiculing the old man. Sweeter by far is the final scene, in which Woody drives through town in a (relatively) new pickup in the sight of all, including good old Uncle Ray watching from in front of his house, giving the impression that he has somehow made good his claim.

Two Chestertonian themes come to mind in the viewer of Nebraska: his defence of juries and his economic theory, distributism. Chesterton argued in favour of the former on the basis that it released the justice system from the callous indifference that almost inevitably accompanies professional law enforcement as its practitioners execute functions that repetition has rendered routine: “Our civilisation has decided, and very justly decided, that determining the guilt or innocence of men is a thing too important to be trusted to trained men. . . . when it wishes anything done which is really serious, it collects twelve of the ordinary men standing round.”[4] But I doubt that even Chesterton would have trusted himself to a jury assembled from the men staring at the television set in Nebraska. And why not? It is because they are “ordinary” in a society whose religious sensibility has atrophied. The occasional blasphemy in the dialogue serves only to remind the viewer that in an age of faith a desperate situation, like an extraordinary occurrence, would have excited a prayer of supplication or praise. Their blasphemy consists, not in the use but in the abuse of the sacred name; what should be reserved to express reverence or need has become a vehicle of mere discomfort, not to say contempt. Aunt Martha’s feeble, quasi-automatic protest at a vulgarity from one of her sons only highlights the pitiful state of small-town folk. The old people of Hawthorne have become mentally as well as physically inert, without any commitment whatsoever, not even to the constricted views that could have at least rendered them bigots.[5] Their forebears, whatever Kate thinks, would have had an allegiance to a religious ideal, however inadequate their attainment of it; for at its best the Christian faith, in contrast to bigotry or indifference, is large, expansive, in that it provides its adherents with principles of behaviour that are universal in their application. Although faith is not based on reason, it is reasonable, so that the believer who trusts God’s revelation will, at least in theory, be able to avoid the narrow and aggressive argumentation of the fanatic or the bigot as well as the paralysis of the spiritually comatose.[6]

One might imagine that the tribal instinct described above would have given rise to feelings of family loyalty and pride, as the clan gathered to celebrate, and share, Woody’s fortune. David certainly has an affection and genuine concern for his father that only Aunt Martha and, despite his oblivion, Uncle Ray share. The rest of the family squabble about money, with Kate providing a continual and brutal commentary on the failings of present and past Grants. Always the outsider, she was the instigator of the move from Nebraska to Montana. Even in the graveyard, her people have been buried separately from the Grants. When David asks why, we discover that she is—or, more probably, had been—Catholic; her folk were buried in the Catholic cemetery, not to be caught dead, it seems with all those Lutherans. The only evidence, however, of her ever having followed Church teaching is, Woody tells David, that fact that he and Ross had been born. Her faith has certainly not given her the amplitude and sympathy that a broad and spiritual worldview should provide.

Does Hawthorne as a farming community illustrate to any degree Chesterton’s distributist conviction that small landholders are ennobled by the responsible ownership of private property? However convincing the theory may be in general, Hawthorne is an instance to the contrary. Men with barely enough energy to manage a television will not be running farms, and indeed the land looks so very bare that it seems impossible than it could ever be worked again. The loss of vision is here coupled with the loss of family. The only people on the one active farm the Grants visit are as old as Woody and Kate. From what we see, the family farm with its concomitant loyalty to people and place, has long disappeared from Hawthorne: you can’t have a family farm without a family; you can’t have a farm without a farmer.

Thanks to David’s contrivance, Woody is at last convinced that there was something in his quest: he drove down the main street of his home town in a new pickup truck. What more could a man desire?

[2] My apologies to Janes Austen, Pride and Prejudice, chapter 29.

[3] Margaret Visser, Beyond Fate (Anansi Press: Toronto, 2002). The tribe is the basis of many—most?—societies from the highlands of Scotland to the forest and veldts of Africa. Joseph Boyden describes it vividly for the indigenous peoples of North America in his popular The Orenda (Hamish Hamilton: Toronto, 2013).

[5] Cf. Christopher Dawson, “The Significance of Bolshevism,” Enquiries into Religion and Culture (Sheed & Ward: London, 1933), p. 27: “The lesson of Bolshevism is that any philosophy is better than no philosophy, and that a régime which possesses a principle of authority, however misconceived it may be, will be stronger than a system that rests on the shifting basis of private interests and private opinions.”

[6] Cf. John Henry Newman, “Wisdom, as Contrasted with Faith and Bigotry,” Fifteen Sermons Preached before the University of Oxford (Longmans, Green, and Co.: London, 1896), p. 305: “It is the peculiarity, then, of Faith, that it forms its judgment under a sense of duty and responsibility, with a view to personal conduct, according to revealed directions, with a confession of ignorance, with a carelessness about consequences, in a teachable and humble spirit, yet upon a range of subjects which Philosophy itself cannot surpass.”