“We have the impression that through some cracks in the wall the smoke of Satan has entered the temple of God.” Pope Paul VI, June 29, 1972

When Pope Paul VI made his cryptic statement that the “Smoke of Satan” had entered the sanctuary of the Church, he was announcing to the whole world an actual truth.

In retrospect, Vatican II (1962-65) – the ecumenical council that was to usher in new breezes throughout Holy Mother Church – had ushered in darker vapours whose presence the Holy Father had long been sensing. And with growing alarm. 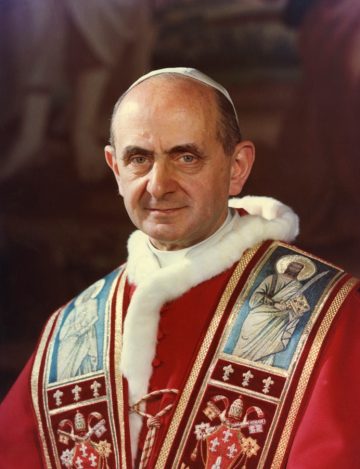 Hence his sensational remarks which came fifty years ago this month during a homily he gave on a particularly significant day – June 29, 1972 – the feast of Sts. Peter and Paul which also coincided with the ninth anniversary of his coronation to the papacy.

“We have the impression that through some cracks in the wall the smoke of Satan has entered the temple of God: it is doubt, uncertainty, questioning, dissatisfaction, confrontation…. We thought that after the Council a day of sunshine would have dawned for the history of the Church. What dawned, instead, was a day of clouds and storms, of darkness, of searching and uncertainties.”

His words generated headlines around the world as commentators grappled for the true meaning behind his words. What was the Holy Father actually referring to? Did anyone know?

As for the actual nature of the satanic ‘smoke’, Pope Paul VI had worrying suspicions that compelled him to order a full investigation into where those other-worldly fumes might be coming from. He also fully understood  the ugly truths an investigation might reveal and the potential dangers it might generate. So he sought out senior clerics he knew he could trust – beginning with one of his closest friends – Cardinal Giovanni Benelli, Archbishop of  Florence, who, in turn, looked to the Canadian-born archbishop Edouard Gagnon, former president of the Pontifical Commission on the Family and currently working with the poor in Colombia, to commence an investigation into all aspects of life in the Vatican in order to uncover the source(s) of the smoke.

It was a huge task, bedeviled not only by the nature of Gagnon’s findings and the identities of their perpetrators but also by direct threats to himself, such as the ransacking of his rooms, burglaries of his office and even death threats. All suggesting the existence of sinister forces within Vatican corridors determined to keep their schemes hidden.

Gagnon’s final report took over three years of lonely and arduous work to complete and resulted in a three-volume dossier. Yet despite his three attempts to present his exhaustive findings to three sequential pontiffs – each of whom he had hoped would launch a much needed fumigation – none resulted. And the dossier remains at large today nearly 50 years later.

But its existence and its history have at long last been recounted in fascinating detail by Father Charles Murr, an American priest and long-time friend of Archbishop Gagnon, in the form of  a memoir, Murder in the 33rd Degree, The Gagnon Investigation into Vatican Freemasonry.

It’s an extraordinary document. In it Father Murr, now 72, recounts his direct experience with the investigation Paul VI commissioned after his mysterious remarks about the ‘Smoke of Satan’ had electrified the world. Father Murr also recounts the odyssey that followed, together with key events and personalities connected to it.

As for the dossier itself, its contents were shocking: “I knew very well what this morning meant to the great man seated next to me,” Fr. Murr writes of Gagnon’s first attempt at placing his dangerous dossier on the state of the Catholic Church’s central Roman government into pontifical custody. It was May 16, 1978.

“After years of intense labour, investigations, research, interviews, organizing and one-on-one encounters with hundreds of people, mostly men, mostly clerics – some, venerable saints and scholars; others, some of the craftiest demons walking the earth – Archbishop Edouard Gagnon now held concrete answers for Pope Paul’s enigmatic and disturbing rhetorical questions …Yes, the unassuming French Canadian had identified quite a number of those nefarious ‘cracks in the wall’ – the ones through which ‘the smoke of Satan had entered’, and was continuing to enter,’ the Temple of God.”

The contents amounted to a black hole of subversion perpetrated by clerical Freemasons – each appearing to have used his powers for treacherous purposes.

Sitting alone with Gagnon in the Pontiff’s private study, the Holy Father was quick to proceed to the bottom line: What among the many itemized therein did Gagnon regard as the most urgent danger to the Church?

Without hesitation, the archbishop replied at once: “Page four of the summation. Cardinal

Sebastiano Baggio …A Freemason. A Freemason naming every new bishop in the world! And every new archbishop, given a metropolitan See, and many of them guaranteed a cardinal’s hat and a vote in the next papal election. Your Holiness will forgive me for saying this, but a Freemason is orchestrating the next conclave. And for all intents and purposes, Cardinal Baggio is naming your successor.”

Gagnon also identified Cardinal Baggio’s greatest promoter and political ally. None other than Paul VI’s Secretary of State Cardinal Jean Villot who’d been promoting Baggio to be named Prefect of the Sacred Congregation for Bishops.

Archbishop Gagnon also told the Holy Father that he had it on impeccable authority that Archbishop Annibale Bugnini was also a Freemason placed in charge of the Commission on Liturgical Reform overseeing changes to the Roman Rite Mass and other liturgical practices before and after Vatican II and who is still considered a dominant force in these efforts. By the time of Gagnon’s meeting with Pope Paul, however, Bugnini had already been banished from Rome and sent as a papal nuncio to Iran.

The perilous state of the Vatican Bank was also a critical issue, one which continues to this day in a parade of ongoing scandals still making headlines and still involving cardinals.

By the time of Gagnon’s visit, however, Pope Paul was just months away from death. And although horrified by the contents of Gagnon’s findings, the Holy Father was too exhausted to take the action necessary to defend the Church. He was also devastated by the death – just a week earlier – of his close friend, the former Italian prime minister Aldo Moro, whose tortured body was found May 9 riddled with bullets in the trunk of a car in the centre of historic Rome. Moro had been kidnapped March 16 by Red Brigade terrorists, after the Italian government refused to negotiate with the extreme left-wing group. After numerous threats, Italy’s five-time prime minister was executed.

After reviewing the dossier with Gagnon, the Pontiff told the archbishop to take it with him and keep it safe, indicating he, the Pope, was in no condition to deal with its contents.

“But Your Holiness,” Gagnon replied. “What are you saying? … These matters we’re speaking of and hundreds of others can’t wait another day!” Exasperated, the archbishop continued: “A Freemason names our bishops! The Vatican Bank is on the verge of collapse! The rector of the Lateran University is laundering millions through it every year! And on and on and on. Your own Secretary of State, Holy Father, is your greatest adversary!” 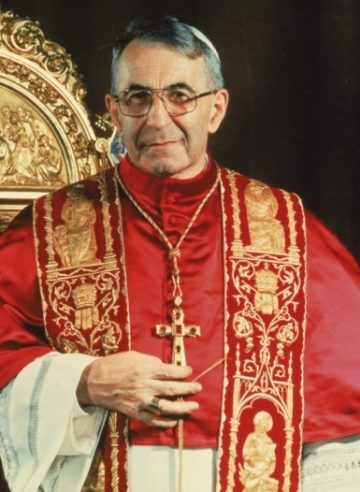 to meet with the papal successor, John Paul I (Albino Luciani-Patriarch of Venice). Which he did, on September 25, 1978. At which time, according to Fr.Murr, Gagnon’s dossier was assessed by the new pope as having extraordinary importance. But the world will never know how John Paul I might have acted on it had he lived. Just three days after his meeting with Gagnon, the new pontiff was found dead in his bed, a mere 33 days into his pontificate – the shortest in papal history and leaving behind lots of unanswered questions about the true cause of his death.

On October 16, 1978, John Paul I was succeeded by Cardinal Karol Wojtyla of Poland who became John Paul II and who surprised both Gagnon and Murr by keeping every one of the 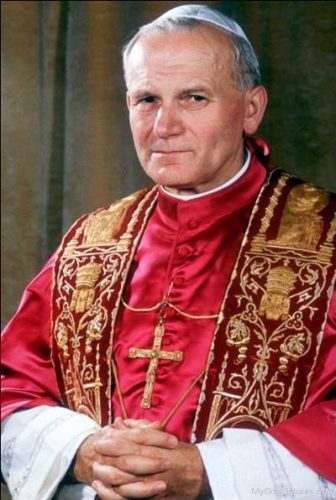 current Vatican cardinals in place, despite what they’d uncovered about the Masonic connections of some of them. Nor, in this ‘Year of Three Popes’ did the new pope  appear to have much interest in Gagnon’s dossier when it was first introduced to him on February 6, 1979 – a view the archbishop considered naïve. That is, until John Paul II’s attempted assassination on May 13, 1981 when he experienced first hand the real dangers surrounding him.

All of which ends this part of Fr. Murr’s account of Archbishop Gagnon’s findings.

Since then, all the main players have died – except for Charles Murr, the final witness to Archbishop Gagnon’s compilation of  the damage Freemasonry has been inflicting on Holy Mother Church since Vatican II.

This is the same Freemasonry that was founded in 1717. This is the same Freemasonry whose main goal has always been the complete destruction of Holy Mother Church by whatever means necessary, though according to the Alta Vendita and many other masonic writings, Freemasons do not intend to destroy the Church’s structure – just the faith itself – and to use its maimed structure and Rome itself as a facade to control the people, using a pope under their direction or even one of them to create a New Mass, new sacraments, new theology and new doctrines emptied of their divine origins, content and traditions and producing a New Worldly Masonic Church.

All of which prompts an obvious question. Did the intention of John Paul I to commence a further investigation into Vatican Freemasonry, based on the Archbishop Gagnon’s work, result in his murder? In Murr’s view, after meeting Archbishop Gagnon and absorbing the highlights of his findings, John Paul I appeared ready to commence a full exposure of Freemasonry’s evil infiltration of the Church. And to begin its complete fumigation.

We’ll never know. In a a recent interview, however, with John-Henry Westen of LifeSiteNews, Fr.Murr appeared convinced that half a century after Pope Paul’s famous statement that Freemasonry is now so well advanced into the structure and administrative heart of Holy Mother Church that no human being could expel the consequences of its cumulative crimes. In his view, the vast damage can only be excised through “an Act of God!”

An interesting and highly informative book, well worth your time.