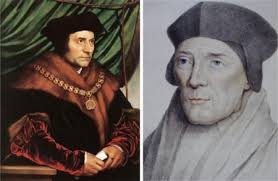 Today we commemorate Saint Thomas More, husband, father, lawyer, sometime chancellor of England, marytyred in 1535 with his compatriot Saint John Fisher, Bishop of Rochester and cardinal of the Church. More was actually put to death on July 6, with Fisher being beheaded on this day, when they are both remembered.

Both saints are martyrs of conscience (as are all martyrs, really, as John Paul II made clear in Veritatis Splendor), More’s case made famous in the 1954 play by Robert Bolt, and the 1966 film, portrayed in immemorial fashion by the great Paul Scofield.

Thomas More saw the absolute importance of law, especially the divine law of God as embodied and instantiated in the Catholic Church, in guiding conscience. Perhaps he saw, at least in inchoate fashion, the hell that would be unleashed by his King, Henry VIII, making conscience a purely subjective matter, unhinging this judgement of morality from the guidance of the Church. We are still living through the rippling effects of the momentous rift of King Harry, and the Protestant, now secular, mindset which resulted.

The whole case of Henry’s quest for an annulment seems rather quaint to us now. If he had asked for his marriage to Catherine of Aragon to be declared null and void in today’s milieu, it would likely be handed to him on a silver platter, instead of the heads of More and Fisher.

But law is law, and marriage, marriage, and the Church, the Church. They all bind us in conscience in whatever age in which we live, as More so rightly and wisely saw. As he declared to his son-in-law Roper, who wanted to mow down the law to rebel against the King and his henchmen:

William Roper: So, now you give the Devil the benefit of law!

Sir Thomas More: Yes! What would you do? Cut a great road through the law to get after the Devil?

William Roper: Yes, I’d cut down every law in England to do that!

Sir Thomas More: Oh? And when the last law was down, and the Devil turned ’round on you, where would you hide, Roper, the laws all being flat? This country is planted thick with laws, from coast to coast, Man’s laws, not God’s! And if you cut them down, and you’re just the man to do it, do you really think you could stand upright in the winds that would blow then? Yes, I’d give the Devil benefit of law, for my own safety’s sake!