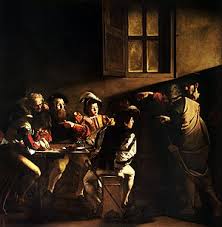 Saint Matthew, the writer of the first Gospel, represents all those ‘called’ from sin, to the highest of virtues. We know little of his life, only that he was a ‘tax collector’, a loathed profession, squeezing out the hard-earned coins from his fellow Jews to enrich the already rich, such as Herod, which may sound sort of familiar, as Trudeau’s ‘carbon tax’ looms. A ridiculous story on the CBC this morning claims that somehow this tax will put more money into the pockets of Canadians in the form of ‘rebates’, and this after it has been processed through various governmental departments. People really do need a lesson on fundamental economics before they vote, or are hired by the CBC.

We know not how ‘sinful’ Matthew’s life was otherwise, only that as soon as he was called, he ‘arose and followed Him’, with no hesitation. Saint Bede in today’s Office of Readings teaches that Matthew was already interiorly prepared to accept the grace of conversion that Christ offered; and not just conversion, but fullness of life, Apostleship and eventually, according to our tradition, martyrdom.

The sinners and tax collectors who gathered for a meal with Christ were those seeking the truth, and forgiveness thereby, not the hard-hearted wallowing in their sin, and justifying evil by the measure of their own behaviour and inclinations: ‘Whatever I think is good, is good, indeed must be good’, a self-justification condemned not just by Christ, but by Pope John Paul in Veritatis Splendor, words which are worth quoting, as our Church divides over the proper interpretation of ‘mercy’:

In this context, appropriate allowance is made both for God’s mercy towards the sin of the man who experiences conversion and for the understanding of human weakness. Such understanding never means compromising and falsifying the standard of good and evil in order to adapt it to particular circumstances. It is quite human for the sinner to acknowledge his weakness and to ask mercy for his failings; what is unacceptable is the attitude of one who makes his own weakness the criterion of the truth about the good, so that he can feel self-justified, without even the need to have recourse to God and his mercy. An attitude of this sort corrupts the morality of society as a whole, since it encourages doubt about the objectivity of the moral law in general and a rejection of the absoluteness of moral prohibitions regarding specific human acts, and it ends up by confusing all judgments about values. (#104)

One must wonder why this fundamental document was not quoted once in Amoris Laetitia. Whatever one’s interpretation, we should realize that ‘welcoming sinners’ into the Church, and to Communion, will not help them much, unless they are, with Matthew the disciple, willing to repent.

And while on the topic of disciples, our coddled students across this province are staging a ‘walk out’ today at 1 p.m. in protest to Premier Doug Ford’s decision to trash Kathleen Wynne’s pornographic sex-ed curriculum. It seems that many students actually enjoy being taught about explicit sex, normal and abnormal, not surprising, one might think. They claim that it somehow ‘protects the vulnerable’, instead of inciting wayward passions, leading to all sorts of evil, scandalizing especially the young and innocent, something else I also recall Christ condemning, and in the harshest of terms.

I wonder that parents, Catholic and otherwise, still send their children into these unhallowed halls of malformation, the well-intentioned motivated by their own desperation that nothing else is available; our government, or at least those entrenched in the school system, display more socialist and anti-Christian tendencies by the day, and they have a tight monopoly on schools at all levels, usurping our tax dollars (see Saint Matthew, above), leaving little left over for any alternative education. Homeschoolers and private schools struggle along, minimally supported, given pats on the head, or even a shrug of the shoulders.

Parents who discern neither of these options possible or practical hope against hope that their little ones come out of the public system (which includes the Catholic) somehow unscathed, or at least not seriously so. Perhaps, a gratia Dei, but I wonder whether one should presume, given where things have gone and are going. Desperate times call for desperate measures, and our era has eerie parallels to mid 1930’s Germany: a totalitarian school and medical system, murder of the unfit, societal conformity, strict control of language and speech, all in a different, perhaps more insidious, mode. Unlike Germany, the Trudeau government will in a couple of weeks permit its people to get well and truly stoned, as Paula Adamick points out today. We seem to be headed more for Brave New World than 1984, or perhaps some bizarre fusion of the two.

It is disheartening that the institutional Church has lost the ball on education at all levels, and seems so frustratingly complacent. Hence, we laypeople have had to take matters into our own hands. So be it, and, seen from another perspective, a great adventure. But I do hope the Church and her ministers, along with the countless parents, see the light soon, that a truly ‘Catholic’ education in this fair land is a vitiated vestige of its former self. Doug Ford may do some good in limiting the damage in this one area of sex-ed, but things have gone too far, and a complete and utter overhaul seems required.

To do that, we need more apostles to complete this task, those who, like Matthew, will give all, without hesitation or looking back.

Rise up, O Men of God, as the hymn sings!