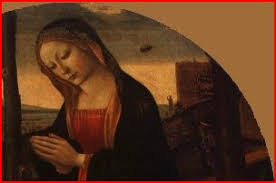 Do you have a new year’s resolution such as losing weight?  Getting more exercise?  Spending more time with family?  Doing more volunteer work?  Learning a new language or some other skill?  We know that people often make a resolution at the beginning of a new year and this can be worthwhile, especially if we stick with them!

And yet we know as Catholic-Christians that January 1st brings with it something much more meaningful than just a new calendar year, as this day we celebrate the Solemnity of Mary, the Holy Mother of God.  Mary is the vessel through which God Himself took on human nature, as she gave birth to Jesus Christ, who is true God and true man.1

Chapter 2 of Luke gives us marvelous insight into Mary’s holiness and her unique and exalted role within salvation history.  In it the Evangelist explains how some shepherds went to Bethlehem and found the newborn Christ-child with His parents Mary and Joseph.  After this the shepherds shared with others what they had been previously told about Jesus (vv. 16-18).

Prior to their encounter with the Holy Family, an angel appeared to the shepherds and said that a Savior had been born – Christ the Lord (Luke 2:9-11).  It is most noteworthy that the angel called Jesus “Lord,” which is Kyrios in Greek.  It is one of the names for God in the Old Testament and one that is used over 1,000 times!2

As Mary heard what the shepherds said about her newborn son, she “…treasured…these words and pondered them in her heart” (Luke 2:19).  The words “treasured” and “pondered” that the Evangelist employs here are very meaningful.

Beginning with “treasured,” it is taken from the Greek word syntēréō which means to put money into a treasury or bank.  In other words, Mary took the words of the shepherds and deposited them for spiritual safekeeping in her heart.  And the word “pondered” is derived from the Greek work symbállō meaning to “piece together.”  This refers to how Mary contemplated the great event she was involved in and actively reflected on who her son Jesus really is.3

It is important to note that as a young Jewish woman with an in-depth knowledge of the Scriptures, Mary would have realized how the Old Testament prophecies about Jesus were being fulfilled through His birth. For instance, long before Christ was born the prophet Isaiah wrote “the virgin shall be with child, and bear a son, and shall name him Immanuel” (7:14).  Similarly, the prophet Micah stated “But you, Bethlehem-Ephrathah…[f[rom you shall come forth for me one who is to be ruler in Israel…when she who is to give birth has borne…” (5:1-2).4 What a blessed time this was for Mary, as she played such a key role in God’s revealing of Himself to humanity and yet she remained humble.

We know that Mary actively promoted Christ during her earthly life.5  One example of this is her role at the wedding at Cana in Galilee as described in chapter 2 of John’s Gospel account (vv. 1-11).  Both Jesus and Mary attended this wedding which, in accord with the custom of the day, included festivities that lasted several days as family and friends celebrated the union between the man and the woman.  Naturally, there was much celebratory eating and drinking.6

Eventually the supply of wine at the wedding in Cana ran empty, which would have embarrassed the young couple.7 Mary picked up on this and turned to Jesus to address this issue, who then said to Mary, “Woman, what concern is that to you and to me?  My hour has not yet come” (v. 4).

While Jesus’ response to Mary might seem a bit rude, within that culture the title of “woman” was one of respect and affection.  Moreover, the momentous event at Cana outlined below is a reversal of the disastrous fall of our first parents Adam and Eve.8

We read in Genesis 3 how Satan tempted Eve to disobey God by eating fruit from a specific tree within the garden of Eden.  Sadly, Eve ate the fruit and gave some to her husband Adam.  The two then felt shame for their sin of disobedience, which we know as original sin.  And yet not long after this tragic event God promised to send a Redeemer, making it clear that the “woman” and her offspring – the Redeemer, would defeat Satan.9   This is outlined in verse 15, in which God says to Satan, “I will put enmity between you and the woman, and between your offspring and hers; he will strike your head, and you will strike his heel.”

The Redeemer is, of course, Jesus Christ and the woman is His mother Mary.  And just as Eve suggested to Adam that he disobey God and thus drag humanity into sin, so does Mary, the New Eve, suggest to Jesus, the New Adam, that he give a sign at the wedding that in Him is found eternal salvation.10

Thus, Jesus decided to change water into wine so that the wedding guests could continue their festivities and in doing so He manifested His divine nature.  For her part, Mary told the servants at the wedding to “[d]o whatever [H]e tells you” (Jn 2:5).

What a powerful example of discipleship this is for us as Mary, the Holy Mother of God, is also our spiritual mother.  Just as Adam designated his wife the mother of the living by calling her Eve (Gen 3:20), so did Jesus designate Mary our spiritual mother while He was on the Cross (see John 19:26-27).11

It is vital that we prayerfully imitate the holiness of our spiritual mother, including her holy responsiveness.  In other words, we must be a Christ-like presence in our churches and communities by being prayerfully attentive to the needs of others and responding accordingly, trusting in the Lord’s power to heal and transform.

This is exactly what Mary did at the wedding at Cana.  She noticed how the wine had run out and the pain this was causing the young newlyweds, and so she responded by turning to the Lord Jesus and she instructed others to turn to Him also.  Likewise, as we respond to others God will give us the help and strength we need to carry out His will in particular situations.

Marian-like responsiveness is expressed in many ways.  It includes making efforts to be friendly to newcomers and others within our churches and communities.  It includes sharing our resources with vulnerable persons, such as the unborn and their mothers, the impoverished, those struggling with mental illness or a disability, the homeless, and the elderly.  And it includes praying for and offering up our sufferings for others, both those we know and those unknown to us.

As we strive to imitate Mary’s holy responsiveness, it is crucial that we concomitantly pray for her glorious intercession.  This is beautifully described in the Catechism of the Catholic Church, which states that “[b]ecause she gives us Jesus, her son, Mary is Mother of God and our mother; we can entrust all our cares and petitions to her…” (2677).  I know from experience that reciting the Rosary is an amazingly powerful way to invoke Mary’s aid and a brother-priest I know refers to praying the Rosary as “downloading the Holy Spirit!”

Let us never forget, dear reader, that Mary, the Holy Mother of God who gave birth to Jesus and raised Him, who intimately witnessed His sufferings on the Cross and His glorious Resurrection, and who was assumed body and soul into heaven at the end of her earthly life, is our mother too.  And as our mother she earnestly desires that we grow ever closer to Jesus and fulfill our call to be holy disciples.  So as we begin this new year, let us aspire to imitate Mary’s responsiveness and frequently call upon her help in doing so:  “Pray for us, O Holy Mother of God, that we may be made worthy of the promises of Christ!

2 Brant Pitre, The Mass Readings Explained.  The Solemnity of the Blessed Virgin Mary, the Mother of God Years A, B and C (Part one), pp. 2,7.

5 Congregation for Divine Worship and the Discipline of the Sacraments.  Homiletic Directory (p. 96).