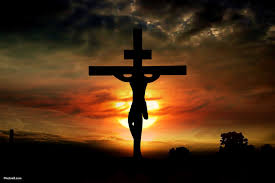 ‘This is my Son, the Beloved; with him I am well pleased; listen to him!’ When the disciples heard this, they fell to the ground and were overcome by fear (Mt.17:6). ⧾

On the second Sunday in Lent we always read the Gospel of the Transfiguration of Our Lord. We do so in order that our focus may be directed towards the glory of Easter and Our Lord’s victory over sin and death through His Passion and glorious Resurrection. The Preface of the Mass instructs us about the meaning of this mystery: After he had told his disciples of his coming Death, on the holy mountain he manifested to them his glory, to show even by the testimony of the law and the prophets, that the Passion leads to the glory of the Resurrection (Preface of the Second Sunday in Lent, The Roman Missal). More importantly however, at the intimate, interior level of our personal relationship with God, we recognise that the Cross in our life and specifically the Sacrament of the Cross which is the Eucharist are the means by which our life is conformed to and transformed by the grace of God. We describe this as the Paschal Mystery  and through it we are given to share in the life of God. The effect of this Mystery in us is our personal transformation in Christ. We worship God and in so doing we are transformed into His likeness.

The Transfiguration describes what is rightly termed a theophany, a manifestation of God. In the Transfiguration Jesus is revealed as God’s Son, the Beloved. It is an act of self-disclosure in which a personal God reveals what we could not know about Him by ourselves. God reveals Himself not as an impersonal cosmological principle, an indeterminate force. He reveals the Trinitarian Mystery. This truth is permanent and definitive and it is the foundation of our Christian life. In his monumental work, The City of God, St. Augustine explains the importance of worship as exemplified by the posture of Peter, James and John who fell to the ground in the presence of God. It is nothing but folly, nothing but pitiable aberration to humble yourself before a being you would hate to resemble in the conduct of  your life and to worship one whom you would refuse to imitate. For surely the supremely important thing in religion is to model oneself on the object of one’s worship (The City of God, VIII, 17). These words were an answer to the pagans of his day who objected that the God Augustine believed in, the very same God we believe in, was too demanding. The common objections we hear in our day is that you don’t have to be religious to be a good person; and the god that many profess to believe in just wants us to be nice and of course, to recycle. Such a god is not one before whom we fall down in worship and adoration, and such a god in time, becomes irrelevant. In truth, there is no worship involved in this, and by consequence nothing and no one to emulate and model oneself on. In this vacuum there is either idolatry of the self or despair. These errors to a certain extent have crept into the Church, and if unchecked, they have the power to lead us also down this path of meaninglessness and despair.

The apostasy or falling away of so many Catholics that is characteristic of our times is the result of a radical inversion of the concept of man and our relationship with God. Over and above the errors we encounter in the world, in my studied opinion, it is above all the eclipse of the Mass as a Sacrifice that has led to the eclipse of the Christian Faith, of the Christian way of life and specifically of the eclipse of the spirit of sacrifice that has defined the Catholic Church through the ages. Our institutes of mercy, our hospitals, hospices, orphanages, schools, clinics have always been and a beacon of Christian light in the world. In so called missionary lands – though every country is now a missionary land – Catholic schools for example, were distinguished by their excellence and sought out by unbelievers on account of this excellence. This beacon of Christian light sadly, has grown dimmer in our day. Many of us here can remember a time when these institutions in our diocese were staffed and guided by consecrated religious men and women whose example of sacrificial love inspired the faithful to great works of charity. The government has taken over many of these institutions and as Cardinal Collins recently observed about hospitals and health care, instead of developing an overall culture of care, we are rushing towards death on demand. They are no longer institutes of mercy but bureaucratic dispensers of rationed care; where “services are delivered” and rationed. To say that this is dangerous is an understatement.

The times are such that we must recover and reclaim our task as salt of the earth and light of the world by first reclaiming the truth of Catholic worship as our personal transformative encounter with the Lord of Glory; for surely the supremely important thing in religion is to model oneself on the object of one’s worship. This may mean a radical reconsideration and realignment of notions that have guided our lives heretofore. First things first (Prima primo): What is the Mass that Our Lord has left us? Is it a celebration of our community, or is it the encounter with the living God in Christ? What do we seek when we come to Mass? Is it entertainment or worship? Dom Prosper Gueranger, who re- established monastic life in France after it had been all but wiped out by the French Revolution, prophetically observed: If the Holy Sacrifice of the Mass should come to an end, it will not take long for us to fall back into the abyss of depravity where the pagans once were, and this could be the work of the Antichrist.

‘This is my Son, the Beloved; with him I am well pleased; listen to him!’ When the disciples heard this, they fell to the ground and were overcome by fear (Mt.17:6). The Gospel of the Transfiguration is descriptive of the Mass. Here we listen to the voice of God who speaks to us through His sacred Word and like Peter, James and John; we worship Him with awe and reverence. We do so in order to model and conform ourselves to Christ crucified, the Lord of glory. It is the Passion that leads to the glory of the Resurrection (Preface for the Second Sunday in Lent, The Roman Missal). Similarly, it is our sharing in the Cross that brings about our sharing in the life and glory of Our Lord and our transformation in Christ.

The Cross is fullest revelation of the nature of God’s Trinitarian life and it is only by means of humility, prayer and voluntary penance that we can come to a deeper understanding of why Our Lord brought about our salvation in such weakness, diminishment and pain. Our profession of faith and willingness to bear our cross, if taken seriously, is a journey into the depth of this Mystery, a Mystery that gives meaning and purpose to our lives. May our Lenten discipline increase in us a love of prayer and penance to God’s greater glory and the salvation of souls. ⧾