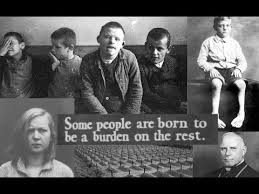 Those who cannot remember the past are doomed to repeat it.

So declared the famed historian George Santayana in 1863, and there is a lot of truth in this aphorism, upon which we would do well to reflect as we enter Canada’s own dark, euthanasia phase, with State-sanctioned murder now legal, an era which I hope does not last long, and that future generations, or even future versions of ourselves, look back upon with horror and amazement.

I will just mention a few historical episodes from ‘the past’ that should give us pause, and upon which we should reflect: 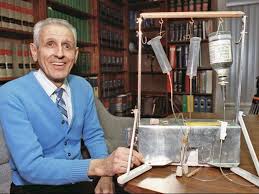 The first is the case of Dr. Jack Kevorkian, the so-called ‘Dr. Death’, who would drive around in a van in the nineties killing people, allegedly ‘helping’ 130 people die with one of two devices: one he called a ‘Thanatron’ (after the Greek word for death) involving intravenous injection, another was a ‘Mercitron’, involving carbon monoxide fed via a gas mask.  People all over America watched in morbid fascination on the evening of November 22, 1998, as Dr. Kevorkian put to death 52 year-old Thomas Youk, suffering in the last stages of Lou Gehrig’s disease, ‘live’ (you will pardon the pun) on the news show 60 Minutes.

Dr. Kevorkian was convicted of second-degree murder in Youk’s death in 1999, and sentenced to 10-25 years in prison.  He served seven, paroled with the promise that he would not advise, nor participate in, the procedure of assisted suicide.

The not-so-good physician died of liver cancer (without being helped along the way) in 2011 (requiescat in pace, along with all his victims, and I hope he and they all repented).  The epitaph on his tomb reads “He sacrificed himself for everyone’s rights“.  Hmm.

Indeed, old Dr. Jack was ahead of his time in his advocacy of the not so Bond-esque ‘right to kill and be killed’. As I wrote yesterday, on a drive home from Ottawa recently, I heard the esteemed Dr. Brian Goldman on our national public radio offering to do the exact same thing as Dr. Death, perhaps with more modern means, but with the full force of law and the help of his own medical trade behind him, and, what is most to the point, with impunity and no fear of legal sanction.

What has changed in the intervening two decades, a scant twenty years, a blink of an eye in historical reckoning?  Is killing acceptable just because it is now ‘legal’?  I wonder if physicians such as Goldman deeply ponder such questions.  From what he, and many others, say, it is all a matter of expediency, of what people want, of the law, courts, parliament, ethicists, the Supreme Court and their ponderous judgements, the zeitgeist of our own age.

Yet underlying all of this cultural milieu is the law of God, of who and what Man is, his eternal destiny, the inviolability of human life, all of which used to be part of our common discourse, now quaint and scarcely discerned by our millennial and relativistic age.

Think  back further, dear reader, to the first decades of this century and the German euthanasia program, which laid the groundwork for the Nazi killing machine and, I dare say, our own culture of death.  I am just finishing up a fascinating little book by the late Dr. Jack Wilke (he passed away in February, 2015, soon after our own Supreme Court decision), on the history of Assisted Suicide and Euthanasia[1].  Two of the chapters are excerpts from an earlier near-contemporaneous account of the origins of the German euthanasia program in the first decades of the 20th century, started not by sadistic SS Guards, indeed well before the rise of Hitler, but rather originating from the work of renowned, respected and widely published psychiatrists who thought they were doing their patients good by ending their ‘misery’.

They began with ‘incurables’, those in great physical distress, but quickly moved to those with any genetic or physiognomic abnormality, psychological conditions such as depression, intractable children, wounded soldiers, anyone deemed ‘defective’.  They were put to death by various means, carbolic acid injected into the heart, slow starvation, overdose of morphine and, yes, gassed in locked rooms.  When Hitler began his ‘final solution’ a decade or two later, he just had these gas chambers disassembled and moved to the death camps.

The physicians would watch these deaths with clinical detachment, making notes and records.  Many of them, when confronted after the war in criminal trials with what they had done, broke down, a number committing suicide, as did not a few of the Nazis.  As one of the repentant and now-bewildered physicians put it[2]:

And one who was responsible for the murder of ‘over a thousand patients’, who used to peer through a peephole as they went through their final agonies, confessed

I was of course torn this way and that.  It reassured me to learn what eminent scientists partook of this action..

We may presume that just such consensus will reassure modern-day physicians, with all the ’eminent scientists’, to say nothing of the agents of the law, on their side, nodding their heads in unison zombie-esque agreement.

Sadly, many of the murderous physicians also got away with slaps on the wrist, or no punishment at all, and went on to live outwardly successful and productive lives in society, a sign of things to come.

We should recall that the origin of the Nazi’s murderous zeal lay not so much in their bizarre, racist, uber–volk theories (this, of course, helped things along), but rather in the deeper, metaphysical principle that there was such as thing as a life not worth living, and that some people are just better off dead, either for their own sake, or for others’.  In fact, in the early years of the euthanasia program, Jews were denied the great ‘good’ that euthanasia offered!  We may have defeated the Nazis, but we did not defeat the spirit and the underlying corrupt philosophy that moved them.

Finally, in our tour of the past, let us zip ahead another generation, to 1997, and the United States Supreme Court decision condemning and outlawing euthanasia and assisted suicide in a landmark decision (in contrast to their earlier 1973 decision permitting widespread abortion in Roe vs. Wade).

For whatever reason, although the Court twenty years before was blind to the great evil of abortion, they somehow saw what havoc legalizing euthanasia would bring upon the land, and one may peruse their written comments with excerpts such as the following from Washington v. Glucksberg[3]:

…the question before the Court is more properly characterized by the “liberty” specially protected by the Clause includes a right to commit suicide which itself includes a right to assistance in doing so.  This asserted right has no place in our Nation’s traditions, given the country’s consistent, almost universal, and continuing rejection of that right, even for terminally ill, mentally competent adults.  To hold for respondents, the Court would have to reverse centuries of legal doctrine and practice…

Would that our own Supreme Court in Canada had followed suit nearly two decades later in their own 2015 decision.  But we see how the culture has radically and fundamentally shifted in that brief time.  Sadly, our own philosophically and metaphysically deficient Justices, before whom our Parliament kowtows in obeisance, by a unanimous decision on February 6, 2015, struck down the law forbidding assisted suicide (a decision, as I wrote, that came into effect yesterday).

We are now in no man’s land, and are going down the same road as the Nazis, as we have forgotten, or ignore, our own history.

We should work and pray that our forefathers died not in vain defending our own rights and freedoms in the great war of 1939-45, remembering that our main battle is not with earthly enemies, who come and go, but with the evil principles, spirits and elemental powers which motivate the evil both in them and in us, which are always present in every age, not least our own.