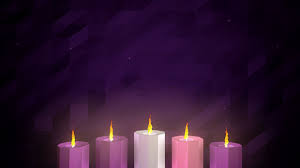 There is a remnant of the former ways in the Church, in this church where there is no sign of Christmas, where the vestments are a sober purple and the music and prayers still honour the traditional character of Advent. This special liturgical tone is especially evident in the readings from the Bible, with their spirit of expectation which is the defining note of the season. The figures who address us there are the epitome of longing desire: Isaiah the prophet, who speaks of future appearance of the suffering servant who was to save Israel; John the Baptist who, in today’s Gospel, is identified as the precursor of that Saviour; and Our Lady, pregnant with the Incarnate Word, waiting in silence and hope for the birth of Jesus, the Messiah. Each, in his own way, reminds us that we too are waiting for the twofold coming of Christ: to each one by grace here and now, and one day in glory at the end of time. On Christmas day, consequently, in our public worship, we shall celebrate the birth of Jesus in history and also the promise implicit in his first coming that he will come again. It is only with the feast-day itself that we begin our celebrations, which traditionally continued until twelfth night, the feast of the Epiphany, on 6 January. That, incidentally was the day we took down Christmas decorations—the tree, mistletoe, wreaths and other such items—and put them away for another year.s there anything more tedious than an old man reminiscing? If that is so, prepare to be bored, for this Sunday and the entire Advent season send my mind back to the distant past, the way things were seventy-five or eighty years ago. . . . and how different they were from what we know today.

The sombre spirit of the Church’s liturgy determined the tone of the pre-Christmas season in the home. No Christmas decorations were taken out until Christmas eve when the tree—an actual fir—was set up and decorated. Only then were presents brought out from hiding and placed under it. Christmas eve was a day of fast and abstinence, i.e., a meatless day of frugal meals. Turkey and plum pudding were reserved for the day itself. Mass was at midnight, not at five, seven and nine the day before. At that splendid Mass we heard for the first time the Christmas hymns that nowadays bombard us from all sides, with the result that by Christmas day one can hardly bear to hear even one more. Today, the commercial aspects of Christmas dominate, not only shops but even our homes, with trees set up and lights ablaze starting from Halloween. It’s no wonder that on the twenty-sixth trees and wrapping are discarded with a weary disgust; we are glad finally to be free from the artificial frenzy and the forced gaiety of the commercial celebration.

It must be admitted that Advent has largely disappeared. There are Christmas parties everywhere in December. Simply go down any street after dark; you will see houses aglow with shimmering lights and Santa Claus, Rudolf and Frosty presiding over the front yards. Even in the Church where, aside from Sunday Mass, we find Christmas concerts and pageants that ignore and so destroy the authentic meaning of Advent. What should be our response to this cultural shift? Should the Church respond to the changing times and alter the liturgical calendar so as to transform Advent into Christmas and then revert to ordinary time with a thud the next day?

It will hardly surprise you that I think not; and I do so for two reasons. First, there is something soothing to know that when you come to church in December you have a haven from the blatant and aggressively commercial attitude universally present elsewhere. Here, at least, can one experience the religious reminder that many if not most people are still ignorant of the advent of the Messiah, either because they have abandoned belief or have not yet encountered it. My second reason for recommending the retention of the quiet, sombre character of Advent is to note that the “world,” as Scripture would say, by which I mean our secular society, is not really observing Christmas at all, even where the name of the feast has not been altered to “Happy Holidays!” or “Best wishes for the season.” People are really celebrating a winter festival, something akin to the ancient Romans who, it seems, wondered if the ever-shorter winter days might not after all end in total and permanent darkness. Hence, lights were used to dispel the psychological as well as the physical gloom. And when, at the end of the month the sun reversed its course and days lengthened, they celebrated sol invictus, the unconquered sun. This primitive sensitivity to the changing seasons, and in particular, to winter, remains in us. So, put up you lights and hope against hope that again this year the sun will return after the winter solstice. But reserve as well your willingness to re-experience, with ancient Israel, with John the Baptist and with the Blessed Virgin, night before dawn in the heightened awareness that we are always in need of, are always awaiting the full advent of Jesus, the Christ into our own lives and into the world.