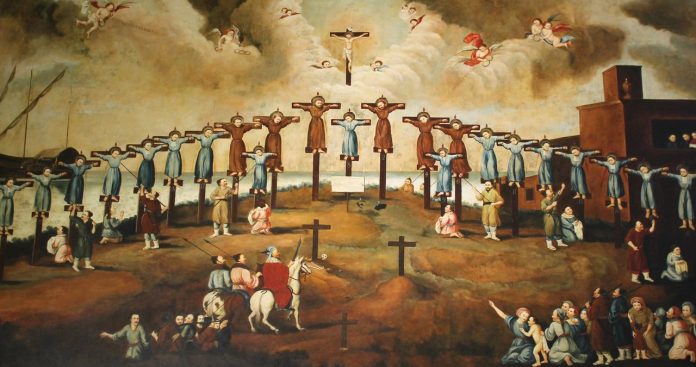 Today is the feast of the Martyrs, Saint Paul Miki and Companions, put to death by crucifixion on February 5, 1597 at Nagasaki, Japan, whose example offers  a healthy antidote to the rather darker and, to be quite honest, more depressing, meanderings and musings of the sad and tragic apostasy in the Shusaku Endo’s 1966 novel Silence.  The Office of Readings is a powerful contemporary testimony to their glorious martyrdom, as the Franciscan priests, brothers and their lay associates prayed, sang and forgave their executioners, as they hung from their crosses, in their ironically joyful imitation of their Lord.  Father Paul Miki preached his last sermon from his cross, saying:

In a providential connection, the depths of which only the good God knows, Nagasaki, the most Christian region in Japan, was also chosen (as a secondary target, the primary one having too much cloud cover) for the dropping of the second atomic bomb by the Americans in August of 1945.  Whatever the exigencies of war, as I wrote, one cannot escape the evil of that action, which destroyed thousands of innocent lives – women, children, including the unborn, the sick, the elderly – in an instantaneous fireball, to say nothing of all those lingering in a living death from radiation burns and poisoning. One may not do moral evil, regardless of how much good may come or how much evil may be avoided, even to stop a war.

The martyrs died for this truth: Rather than apostasize, they chose a far greater reward than the continuation of their earthly lives for a few more years. Their pagan executioners thought in some way that by killing these innocent Christians, they were preserving their own Shinto and Buddhist faith – ultimately a religion of despair, as the great Chesterton so vividly wrote – and their own national cohesion. In the demonic tortures they imposed, their flailing against the truth and the light, we may surmise, at some level they knew something was wrong, and that the martyrs had something far more right, as they sang their way into eternity, with serene and joyful faces.

Curiously, or miraculously, as one’s a priori suppositions lean, eight Jesuit priests stationed in Nagasaki in 1945, although only eight blocks from ground zero, not only survived the blast, but received no ill-effects from the radiation and lived to a ripe old age, as religious often do.  The same goes for the Franciscan house nearby the Jesuits.  As mentioned, wonders really do never cease, and there are no accidents in God’s providential design.

May the martyrs pray for us, that in this age of falsity and lies, all may be open to the Truth.