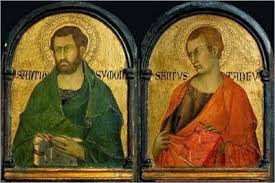 Some stories sum up the insanity of our world in a way I find almost profound.  Apparently, a male homosexual sperm donor donated his ‘seed’ to a female friend, back when they were in medical school together. She raised the children, both now teenagers, while he stayed involved to some degree in their lives, as what he terms a ‘spuncle’.  They signed an agreement in 2002 that he would not be liable for any financial support.

Now, however, the mother is suing for child support, claiming that Dr. Ransom, as the deviant doctor is named, has acted as a father all along, sending emails, even having the teens over for a week in Italy with his ‘partner’. What he’s doing in Italy, after having us pay for most of his education, is another story.

What, oh what, is not wrong with this picture?  The Church predicted such mayhem back in 1987, in the Instruction Donum Vitae, warning of the evils of artificial fertilization, reiterated in 2008 in the updated Dignitatis Personae. Neither physician, I would presume, has even heard of these pearls of heavenly wisdom, and we wonder why our medical system is in such dire straits.

Besides the deficient upbringing these two teens are receiving, do you think these doctors will resist the culture of death, and not kill people with scarcely a peep from their warped and erroneous conscience? Unlike the Nazis, they will not even have to justify themselves. God help anyone who enters a hospital in any even-near moribund state.

It now turns out that the FBI is going to probe Hillary Clinton’s emails after all, after a new spate of leaked documents related somehow to Anthony Weiner’s sexually suggestive ‘sexts’. Well, Mr. Weiner (I know, I know) is married to Huma Abedin, a Muslim, and the vice-chair ‘person’ of Ms. Clinton’s campaign.  Who knows what this is all about, but likely guaranteed is more Clinton corruption, and subversion of the rule of law.

What this does to the campaign with ten days to go is anyone’s guess. There is a groundswell in America, with a lot of people fed up with political entitlement and, unlike Obama’s campaign of 2008, things really are now ripe for a change.

Today is the feast of Saints Simon and Jude, mentioned briefly in the Gospels, but of whom little is known for absolute certain beyond that.  Jude is the patron saint of ‘lost causes’, of which there are many in our world (see above).  But we all have our personal ‘lost causes’, which are not really lost in the sight of God, who can even raise the dead to life.

So worry not; cast all your cares upon Him, for He cares for you, as the chief Apostle Peter reminds us. For all manner of things will ultimately be well.